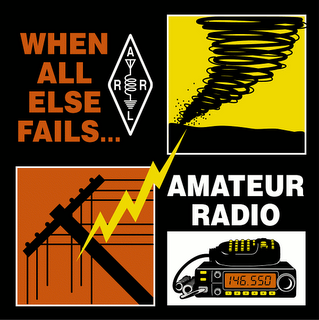 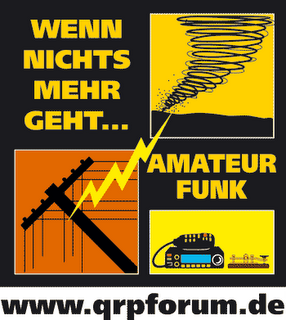 Above you can see two designs. The one in English was designed by the American Radio Relay League for a past Field Day (2003, I think). They have used this logo, since then, whenever they have desired to promote Amateur Radio's unique ability to be a "failsafe" communcations resource in an emergency when all routine commercial avenues fail.

In German, you will see a modified design that the German QRP Club put on T-shirts; and was selling at the Friedrichshafen Hamfest in Germany, which is Europe's version of Dayton Hamvention. You can see the similarity; and so did the ARRL. In fact an ARRL official, Bob Inderbitzen NQ1R, who was at Friedrichshafen went over to the German QRPers and asked/requested/demanded that they stop selling the T-shirts, as the logo is copyrighted by the ARRL.

Was the League within their rights? Yeah, they are ........ BUT the logo being used by the Germans is an adaptation and not a carbon copy. The similarities may be enough that the copyright was technically being violated - that's for the lawyers to decide. But that having been said, I think they made a crucial error. First and foremost, the League should be about promoting Amateur Radio and good will - anywhere and everywhere! The League official should have asked the German QRP Club to come to some sort of agreement, split the profits, don't sell any more T-shirts or perhaps agree to never use the logo again after the first run - anything but stop them at this point.

The idea is to spread the word about the need for Amateur Radio worldwide. Selling this logo on a T-shirt in Europe is not exactly going to hurt the League's efforts in the United States. The action they took might technically be the right course; but it makes the ARRL look incredibly small, selfish and petty. Worry about spreading Amateur Radio popularity and our survival first - worry about the coin later. The League needs to keep its priorities straight. If we lose Amateur Radio, the League won't HAVE ANYTHING to make money on.