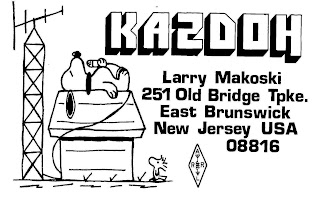 I was first licensed in December of 1978. This was a few years after my first, unsuccessful foray into Amateur Radio. I tried to earn my license as a high school student; but as it turned out, I did not have enough determination to learn the Morse Code. I got frustrated and gave up way too easily.

After college and winning my "first" full time job, I read in the local newspaper about an Amateur Radio Novice Class license course that was being offered at a neighboring town's high school night program. I took the plunge and jumped in with both feet. Eight to ten weeks later, in November of 1978 I passed the test. I even aced the Morse Code part! Four weeks later, in December, I received my license with the callsign KA2DOH.

As a Christmas gift that year, my parents bought me a used Drake 2-NT transmitter from Burghardt's in North Dakota. I has saved for and had purchased a Heathkit HR-1680 receiver that was specifically oriented towards the beginning Novice operator. I took most of January to build that radio. Finally on January 28th, 1979 I was ready! The antenna was a random length wire stretched between my bedroom window and the garage. This went to an antenna tuner which went to the 2-NT. I don't quite remember how I rigged the station to switch the antenna between the transmitter and receiver; but I do vaguely remember there being a manual throw knife switch in there! My dummy load was a Heathkit Cantenna. The key was a Viking Master straight key. I had a Globe VFO hooked up to the Drake 2-NT through its crystal socket.

I carefully tuned the transmitter and the antenna tuner and listened for a station calling CQ. I was too nervous to put out my own. I finally heard someone calling at a comfortable speed. The frequency was 21.135 MHz on the 15 Meter band. I put out the station's call followed by "de KA2DOH" and was answered by Adam KA9CIH out of Armington, Illinois! This milestone QSO lasted all of about 20 minutes, from 2110 - 2130 UTC. I gave him a 589 and he gave me a 599. I don't remember too, too much about the QSO except that I was terrified, ecstatic, sweaty-palmed and elated all at the same time! And at the end I was walking on air because finally, I was a "real Ham"! I was also exhausted! I didn't make any more QSOs that day. I didn't even call CQ any more that day; as I even logged unsuccessful CQs in my logbook.

My second QSO came a few days later when I answered a CQ put out by KA3CIV, Gary in Saxonburg, PA. And so it went, day after day after day. My code speed increased; and by the summer of that year, I was ready to go for my General. That's a whole story in its own right that I will go into in another post.

For kicks, I've dug out my old Novice logbook and have entered into QRZ, some of those first stations that I had worked. Sadly, some of these folks are either Silent Keys or have dropped out of Amateur Radio altogether. Happily, some others are still active and have upgraded and sport different class callsigns. The image above is my Novice QSL card. I did the artwork myself and had them printed by a QSL printer who no longer exists. Those Novice days were good days! I'm glad that I entered the Ham radio arena the way I did. I think the FCC made a terrible mistake when they discontinued the Novice license. It was certainly an experience that I will NEVER forget.