Time for a callsign change! 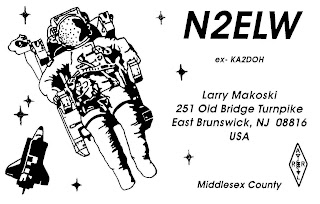 I was a happy ham as a General. I had plenty of
HF privileges, which is what I always had wanted. I was also getting my share of DX as well as ragchews. Life was pretty good.

However, in the radio club that I belonged to, there was another DOH. Phil Styn WB2DOH was the other DOH And people used to get the two DOHs confused.

So in 1983, two momentous things happened. First, I set paperwork in motion with the FCC to request another callsign. It was granted and I became N2ELW in the Spring of that year. That was the callsign that I was to live with for the next 17 years.

The second thing that happened that year was that I started on the road to upgrading my license class once again. This time my sights were fixed on to acquiring an Advanced Class Amateur Radio license. I commenced studying in the mid-summer and was finally feeling fairly confident by October. Confident enough to make a trek to the FCC and take the exam.

Taking a license examination in those days was light years different than it is today. First off, there were no question pools. You picked up a copy of the license manual for whatever class license you were interested in, and you married it. You and the book became inseparable companions. You and the book became one. You not only studied the theory; but you learned it. You had no idea as to what kind of questions they were going to throw at you; so you learned everything the best you could. Sure, everybody memorized formulas and stuff like that; but you had no questions to pick from - you were going into the exam cold as an ice cube.

Secondly, if you wanted to upgrade; then that meant a visit to the FCC offices. For those of us in New Jersey, that meant either a trip into New York City on Varick Street, or a trip out to Langhorne, PA. I chose the Langhorne, PA location. It was an easy drive and the Oxford Valley Mall was located right next door. There were plenty of places there to go grab a snack, afterwards.

Unlike today, there were no friendly "Joe Hams" there to greet you. You were met by FCC personnel who usually acted like you were the last person they were interested in seeing. The usual demeanor of the day was brusque and "no nonsense" of any kind. But, on the up side, the FCC folks were extremely professional, competent and fair.

We lined up like cattle waiting for the slaughter. Code exams were given first. For the heck of it, I decided to give the 20 WPM code test a try. I had my 20 WPM certification from ARRL Qualifying Runs for a while by then, and I figured it would be a cakewalk. WRONG! For whatever reason, I choked like a Little Leaguer on a baseball bat. I failed miserably - making the "newbie" mistake. I missed some characters and instead about forgetting them and moving on; my brain became a log jam and my copy ended up looking like gibberish. Kind of like "white coat" high blood pressure, I guess. Some folk's blood pressure goes up at the Doctor's office just because they know it's going to be taken and they get all worked up about it.

Later on, I realized that it was a case of the pressure of the moment of being in the Hallowed Halls of the FCC. Once I was out of there, I was able to copy at 20 WPM with no problem. Good thing I wasn't testing for the Extra exam that day! But it was not a good way to start; especially on the day that I was taking the hardest examination of all the FCC offered for Amateur Radio exams. Years later, upon earning my Extra, I was to confirm what many others had told me. The Advanced Class Amateur Radio exam was THE toughest of all the tests. The theory and the math were difficult; and I still had to know frequency allocations as well. All in all, it was not a pleasant experience; but I did in fact make the grade.

It was October 18th, 1983 and I walked out of the FCC offices as N2ELW, Advanced Class Amateur Radio operator. New frequency privileges in my pocket and a burnin' yearnin' desire to make use of them.