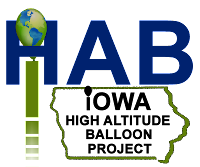 Today was the launch of another high altitude balloon by the iHAB project.  This time the payload contained a radio beacon sponsored by QRP ARCI.  The launch was out of Ottumwa airport in Iowa and everything went "swimmingly" as Gene Cernan, Apollo astronaut, used to be fond of saying.
I picked up the beacon at 14:31 UTC and it was 559.  The receiver was, of course, my K2 and the antenna was my HF9V vertical.  Later, I decided to switch over to the G5RV and was surprised to hear the beacon significantly better.  The signal didn't increase so much as the background noise decreased - typical when switching from a vertical to a horizontal wire. I stayed with it all the way to 15:23 UTC and the 27,000 foot level, when signal strength started to fail and I had to get a move on to get some chores done, anyway.  I got a chance to come back to the radio at about 17:20 UTC when the balloon was at approximately 80,000 feet.  At this point the signal here was near the noise floor - 339 at best and was being quickly covered up by contesters.  Shortly thereafter, at about 17:59 UTC, at the 87,000 foot level, the balloon burst and the parachutes deployed and the payload was recovered  in a cornfield near Winchester, Illinois.
In addition to being heard all over the US and Canada, there were reports on QRPSPOTS from the Cayman Islands, Germany, Scotland and Panama.  Not bad for a transmitter putting out 1.6 Watts to a 65 foot wire antenna.

I've uploaded a very small video of the K2 and if you turn your speakers up, you can hear the beacon as I heard it.  According to Terry WA0ITP, there will be an iHAB-3 in the near future.  Is Amateur Radio a great hobby, or what?

Email ThisBlogThis!Share to TwitterShare to FacebookShare to Pinterest
Labels: iHAB