Not a bad life, if you can get away with it! 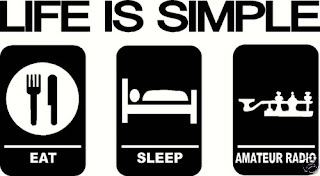 Thanks to fellow RVRC and ETS of NJ member, Don K2DSV for sharing.
My evening was spent on good ol' 80 Meters tonight as 40 Meters had that unfortunate 20dB over S9 QRN on it tonight (so no 40 Meter Foxhunt for W2LJ).  But ...... wow!  The pickin's were very sparse!  Not many signals at all on 80.  I did have one QSO with a fellow who cut it very short after I told him he had a 579C signal.  He asked what the "C" was for, and I honestly told him he had some pretty bad chirp on his signal.  I went from being "FB COPY" to pretty hard to hear in a matter of seconds.  I guess he didn't appreciate being told that he had a less than optimal signal.  But what are you supposed to do .... lie?

So I went looking for another QSO, but as we used to say, (at the risk of offending PETA folks or other animal lovers) that you could swing a dead cat without running into anyone.  My CQ was finally answered by Randy KX1NH and we had a bit of a chat. That call, which is so distinctive, had clearly stuck in my mind. And the reason his call stuck in my gray matter is that we just worked each other Sunday evening in the Run for The Bacon.  And it turns out that this is the same Randy who used to be K2VT, with whom I have QSOed MANY times before.

When Randy moved to New Hampshire, he acquired his neat call.  I mean really ..... how cool is KX1NH?  It's not the kind of call that you are going to easily forget once you've worked him.  IMHO, that was a stroke of genius on Randy's part to obtain a call like that.  Rarish prefix, nice rhythm on CW, and distinctive with regard to his QTH.  A tip of my hat to Randy! Oh, and Randy's daughter's call?  K2KID !!!

And by the way, that QSO with Randy was number 95 for 2012.  I know, I know ..... a lot of you out there can do 95 QSOs while taking a catnap on a Saturday afternoon, while standing on one leg and with one arm tied behind your back.  But the last couple of years, my QSO count was pretty well below average compared to what I'm usually used to.  So while this is nothing to write home about (but that's kind of what I'm doing, aren't I?), it's very good compared to where I was at this point in 2010 and 2011.