This inquiry appeared on the QRP-CW Yahoo group e-mail reflector today.  It's from a relative newbie to QRP and it's also a reasonable question:

(Cue the Announcer - "The calls and names have been changed to protect the innocent.") 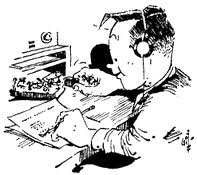 "When running QRP, is it necessary to ID as XXXX/QRP ? I like to keep things simple, want to do it right, though. Signing as /QRP complicates things because I would have to keep a separate logbook and open a separate LotW account so QSLs would verify. So, not IDing the /QRP is acceptable practice? Or what?"

Here's the answer that was given :

"Signing /QRP isn't really necessary -- the other guy already knows you are weak, no need to complicate things :-)"

I am going to assume that the smiley face emoticon at the end of the sentence indicates that the answerer's  tongue was planted firmly in his cheek.

But in case it wasn't, I felt I just had to jump into the fray and commented thusly:

I've gotten my share of 589 and 599 signal reports.  Sometimes propagation is so that your signal is strong, even though it's low in power. I can't tell you how many times I have worked Todd N9NE (one of many, for example) in QRP Sprints and had his 5 Watt signal almost literally blow out my ear drums in NJ!

But back to the original question - I hardly ever sign W2LJ/QRP; and in fact, rarely mention power in QSO, unless asked. In my most humble opinion, one of the biggest hurdles to QRP success is the QRPer, him or herself.  As a group, I think we need to just operate - don't think of yourself as a sardine - think of yourself as just another one of the scads of tuna out there. If you start putting limits on yourself, then other folks will be more than willing to join you in the process.

As far as the world knows, I'm just another operator on the air - nothing more, nothing less. Informing the world that you're running QRP can, in certain instances, be detrimental. I have had several instances where I was engaged in a nice long, rag chew session, where the code was flowin' nice and easy. As soon as I mentioned I was running 5 Watts, I literally went from 599 to "Can't copy you, OM" - in the matter of mere seconds. Now, due to changing band conditions, I know this can happen even to a QRO station. But sometimes I wonder if it affects those out there who "KNOW" that a QRP signal just HAS to be weak"

Mind over matter, as it were - or even worse, that "Conventional Wisdom" thingy again!.

Anyway, tomorrow is QRPTTF. Have a full day planned - have to take the Jeep for service in the AM and as soon as that's over, I have to go "canning" for the Knights of Columbus.  This weekend is our annual fundraiser for Citizens with Special Needs.  If I get a chance to get on the air. though, I know I will hear QRP signals all over the RST spectrum - from ESP level to 599 +++.  It's just the way it is!