I got confirmation from Elecraft on Monday that my K3 was shipping UPS 3 Day Select. So you have to figure - Tuesday, Wednesday, and delivery on Thursday.  In fact, that's what the official UPS Tracking Website confirmed for me - delivery by the end of the day on June 28th.  So imagine my surprise when I got home to find a big brown box waiting for me.  Inside was: 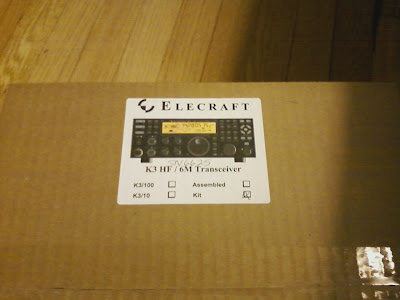 Also included inside are the K3 ATU, the 400Hz, 8 Pole Roofing Filter, and the handheld microphone. I also ordered a microphone for the KX3 while I was at it.  And no, before anyone gets all excited, I am not renouncing CW!  I got the microphone(s) for two basic reasons.

1) Doing Ham Radio demos.  I have found that demos go best when you show folks CW and SSB.  There's nothing like putting a mic into the hands of someone and allowing them to speak with someone halfway around the country, or the globe for that matter.  It's something that THEY can relate to.  Morse Code is "cool" as I have been told by a lot of kids - but letting them talk to someone in far off Uzbekafgonalakistan is the ultimate "Wow".  (A note to my lawyer - yes, that is a made up country name).

2) Special Event stations - I really used to like to hunt them.  A lot are not on CW at all these days, a lot are phone only.  Hence, my decision to buy some microphones.  Take for instance the "13 Colonies" Special Event that is held each year around Independence Day.  Last year I was able to find exactly ONE state (MA) on CW.  Maybe I won't work many; but at least now I can try.

I really have to tip my hat to you SSB QRP guys.  You guys have supernatural patience!  Except for the rare instance, I will stick with CW for a 99% majority of my operating time.  I don't have your kind of patience.

Tonight was preoccupied with other matters. Tomorrow night, God willing and the creek don't rise, I will begin by doing a complete inventory.  I don't expect anything to be missing as K3s are not rushing out the door as the same rate as KX3s.

Even though the sunspot number is a paltry 28, I had a good night on 20 and 30 Meters.  Germany, Lithuania, Ecuador and The Ukraine were all easily reached with 5 Watts. I even managed to bust a mini-pileup to work the Lithuanian on 30 Meters.  That felt really good!