I received a gentle nudge from one of the 2013 Skeeter Hunt participants this week via an e-mail, "Did you ever get the certificates out?".

Oh my gosh!  No, I hadn't and for that, I deeply and sincerely apologize to all of you!  I had about half of them printed out and then got busy with life and other things, and they got pushed to the side, on the backburner. But no excuses, this was totally a lack of focus and concentration on my part.  For that, I beg your indulgence and thank you all for your patience and understanding. 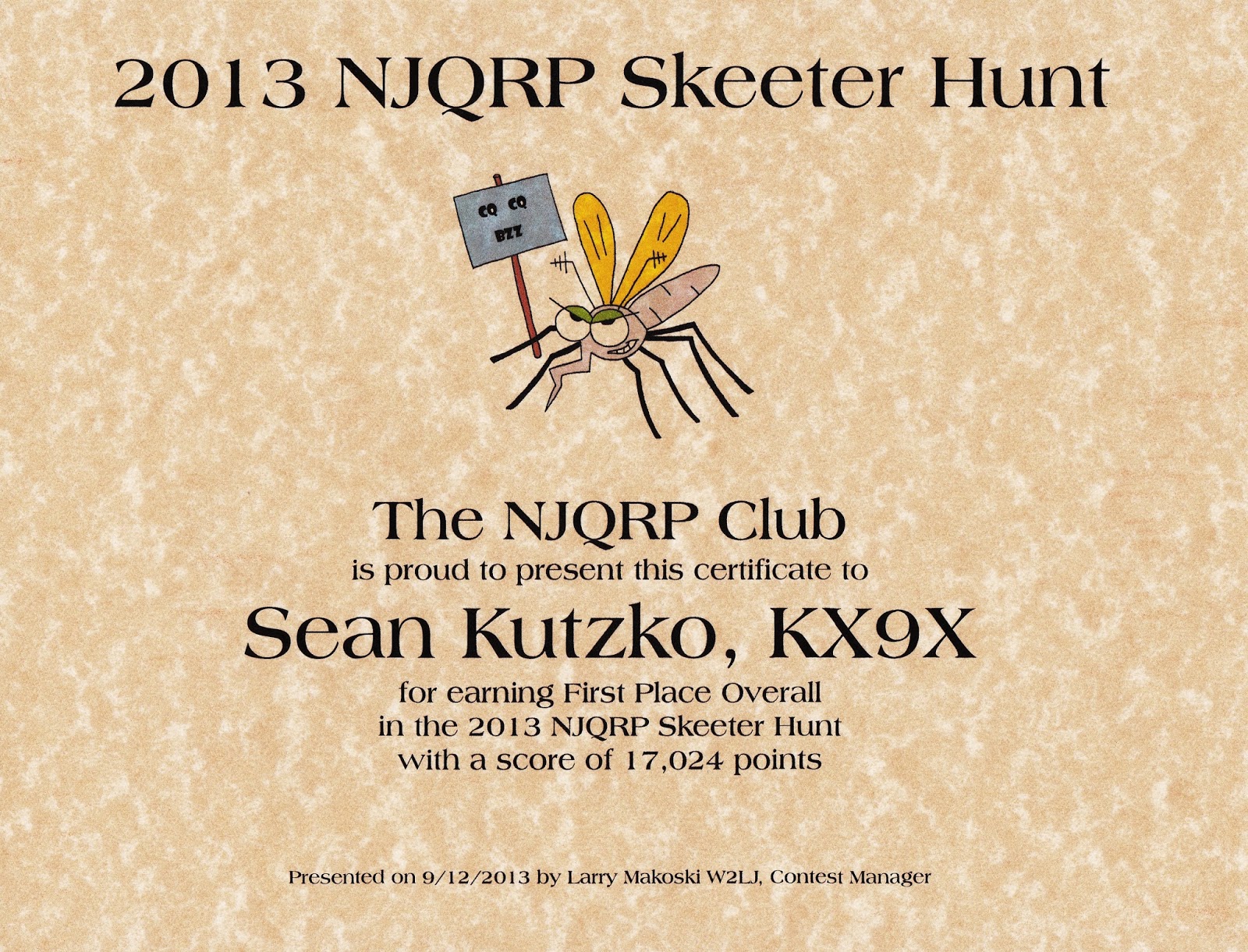 Certficate Numero Uno for the top 2013 Finisher - Sean Kutzko KX9X. Who will finish on top this year?

There are approximately 50 certificates that will be in the mail over the next series of days.  The top five overall finishers, as well as the top finishers of each state, province or country that entered as well as some other categories, have all been printed. Now comes the envelope stuffing, addressing, and going to the Post Office.

News about the 2014 Skeeter Hunt - yes, there will be one this year!  It's tentatively scheduled for Sunday August 10th - the second Sunday in August, just like the previous two years.  The only big contests on the air that weekend are the Worked All Europe Contest and the Maryland-DC QSO Party, so no big competition from anywhere else to keep you from participating.  :-)

There will be a new logo this year, as I had one drawn by a professional cartoonist.  There will be T-shirts and other apparel available if you're so inclined, through Cafe Press.  Keep your eye on the look out for that - that will appear in the Spring.

Sign ups for Skeeter numbers will commence on the First Day of Summer, in keeping with the season.  So again, keep your eyes open for that as we come closer to June 21st.  Plenty of annuncements will appear on the various e-mail reflectors.

So ....... here comes the big question.  Any changes to the Skeeter Hunt that you would like to see for 2014? Do any of you have an idea for a theme for this year?  I have a neat one in mind that I am still fleshing out, but if someone thinks that they might have a cool idea - I'll be glad to consider it.  Send me an e-mail or make use of the comment box!

Oh, and for 2014, I promise to have the certificates out on a more timely basis - you have my word of honor!