Most of you have undoubtedly heard by now that the Antares rocket, launched from NASA's Wallops Island Launch Facility in Virginia, blew up 6 seconds after lift off. 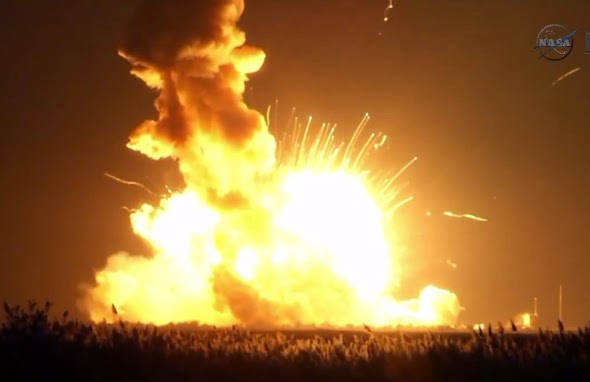 Unfortunately, the rocket was carrying various OSCAR satellites, specifically the GOMX-2 and RACE CubeSats.  Fortunately, it appears that no ground personnel were injured or killed by the mishap.

According to the ARRL:

"The 2U GMX-2 CubeSat was intended to test a de-orbit system designed by Aalborg University in Denmark. Karl Klaus Laursen, OZ2KK, is listed as the “responsible operator” on International Amateur Radio Union frequency coordination documents. The Amateur Radio payload proposed using a 9.6 k MSK data downlink on 437.250 MHz. Also on board was an optical communications experiment from the National University of Singapore. The mission also hoped to flight qualify a new high-speed UHF transceiver and SDR receiver built by an Aalborg University team.

The Radiometer Atmospheric Cubesat Experiment (RACE) CubeSat was a joint project between The Texas Spacecraft Laboratory (TSL) at the University of Texas-Austin and NASA’s Jet Propulsion Laboratory (JPL). It carried a 183 GHz radiometer, a new science instrument designed by JPL. The primary objective of the RACE mission was to collect atmospheric water vapor measurements. The spacecraft was equipped to transmit using GMSK at 38.4 k and CW telemetry on a downlink frequency of 437.525MHz, as coordinated with the IARU. TSL’s Edgar Glenn Lightsey, KE5DDG, was listed in the IARU coordination documents as the responsible operator."

The Antares rocket is a design of the Orbital Space Sciences group. It was on a re-supply mission to the International Space Station and had 5000 pounds of cargo as well as more than two dozen satellites on board. Mankind has been launching payloads into earth orbit for 57 years now. This just goes to show, that as much as this is "rocket science" - that stuff still happens.

On a related note, I was able to visually witness a very nice pass of the ISS this Monday evening.  It was about a 60 or 70 degree pass just around local sunset.  The ISS was very bright and showed up on the horizon right on cue. Wonderful how that works, isn't it?  As I watched it fly overhead, just over the waxing crescent moon, I was reminded of the many passes of RS10/11 and RS12/13 in the 90s. I used to work those LEOs a lot, and had many pleasurable contacts over them.