Paul NA5N and Jan N0QT have published all the details about QRP To The Field for 2015 on their Website.

The theme, as shown above, is "Geronimo" - charging out into the QRP Field to celebrate the first inhabitants of our Nation.

Luckily, New Jersey has plenty of locations that will fill the bill. One of the first operating venues that comes to mind would be to operate along the banks of the Raritan River. The Raritan is THE major river in Middlesex County. The river itself is named after the Raritan people, who were a branch of the Leni-Lenape (Delaware) Indians who inhabited Staten Island and most of New Jersey.  The Raritan River empties into Raritan Bay, whose northern most waters touch Staten Island.

There is a beautiful County park in Highland Park, NJ with some beautiful expanses that are right on the shore of the Raritan, very close to where it reaches its mouth on Raritan Bay. It's about a 20 minute or so ride from the house. I've been to the park before, but have never operated from it.

The other venue that comes to mind would be to operate from somewhere in the Watchung mountains - either Washington Rock State Park, or perhaps the Watchung Reservation (a park in Union County).  Again, the first inhabitants of the Watchung Mountains were the Leni-Lenape, who named them the "Wach Unks" or "High Hills".  It is thought the Lenape favored the Watchungs for their abundance of natural resources, including plentiful freshwater rivers and streams, a variety of forests, and plentiful fish and game. I've only been to the Watchung Reservation once, and that was when my son was still in a stroller. I may have to take a ride out there this weekend and hunt around to find a good operating spot.

The other good news is that according to WeatherUnderground, this is the forecast for the latter part of next week: 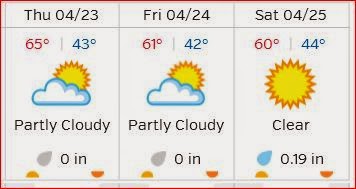 I know that with 9 days or so to go that this can change. But the trend seems to be for dry weather with moderate temperatures. Either site, the banks of the Raritan or somewhere in and around the Watchung mountains should make for a pleasant experience.