To say it's been a strange day would be putting it mildly.

I was gently wakened by my wife Marianne this morning at 4:00 AM. She was getting ready for work and she came upstairs and was tapping me on the shoulder. Groggily, I heard words to the effect that, "There's something wrong with the refrigerator."

I went downstairs to the kitchen and there was indeed something wrong with the refrigerator. The compressor motor sounded quite labored and there was an awful smell in the kitchen.  It was my guess that the refrigerator leaked some refrigerant/lubricant and that it dripped onto to the warm motor, causing the smell. I unplugged the fridge, and emptied the freezer into our chest freezer in the basement, and the refrigerator contents into two coolers. I opened all the windows to rid the house of the odor, and then it was off to the A&P at 6:00 AM for ice. I shouldn't complain, I guess, as the unit is only a few months from 17 years old.

At lunchtime, I headed out to the Jeep for some QRP, even though the solar weather forecast thing looked pretty grim. Heck, it looked very grim. QSB was bad - very bad. Propagation was like this: 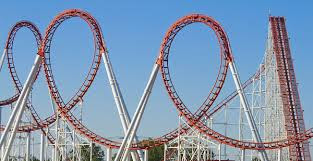 Even with that, I made three contacts while I was out. One with KT0A who was SOTAing on W0D/BB-049, according to SOTAwatch. Another with N7G on 18 Meters - Special Event Station from the US Open Golf Championship. It took me a bunch of repeats to get a 599 (go figure). And finally a brief QSO with KG9HV, John in Indiana who answered my CQ. I would have really enjoyed chewing the rag with John, but I'm not a big roller coaster fan.

Finally, Joe W2OZO (a local Ham Radio friend) posted this on Facebook yesterday. I spent about 10 minutes or so trying to decipher this. I'll admit it - I couldn't. Just goes to show you that sending Morse Code is an art that requires practice. I'll say it for the thousandth time - spacing matters .... it's the difference between having a conversation or just sending gibberish. Anyone of you out there able to copy this?  If you can, you're a much better CW op then I will ever claim to be.