I began 2017 with a pledge to post more often, and there's one resolution already shot to Hades!  But I do have a reason for my lack of blogging activity. I've been battling a crummy case of sinusitis the past two weeks. I'll spare you the gory details, but it's been accompanied by a bad, hacking cough,  As a result, I've been staying out of the chilly basement shack. Staying out of the shack limits me severely as to what I can talk about.

I did get these through the mail, though - so I'll post two images: 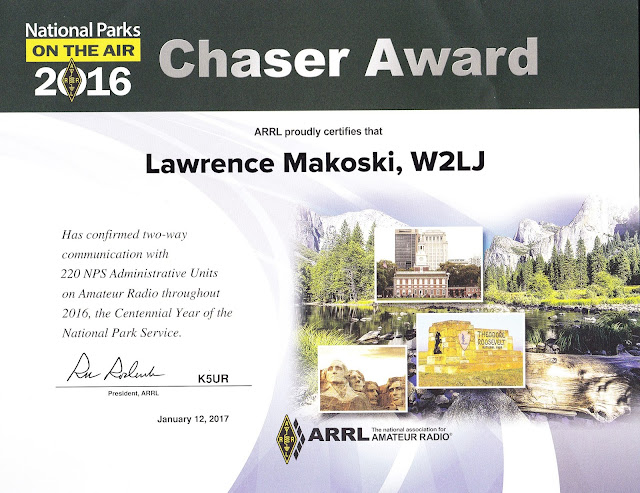 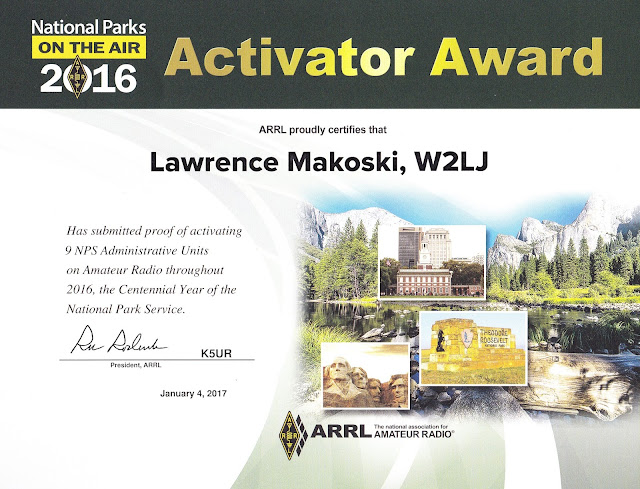 I could be picky and say I actually participated in 10 activations, as one of those was under the NJ2SP call sign of the South Plainfield Amateur Radio Club - but only 9 under my own call.

A few folks have been bothered by the price of the certificates, However, if you consider the IT, publicity and staff man hour costs that it took to make NPOTA such a success, it's really not that much.  The amount of enjoyment I received throughout the year from NPOTA makes the cost of these two pieces of paper a mere pittance in comparison. Also, you have to consider that this is probably a "once in a lifetime" event.  I highly doubt that I'll make it to the National Park Service bicentennial.

I did receive something very recently from Rich G3CWI at SOTA Beams that I'm very excited about, I hope to play with it this coming weekend and I'll be posting about it real soon, so stay tuned!. This stupid sinusitis is definitely a drag.