I got on the air last night, in my 62F (16C) shack in order to participate in the 40 Meter QRP Foxhunt.  These hunts have been deplorable for me this year, with hardly any success.  Last night was no different.  The Foxes were NK6A in California and KV2X in New York.  I didn't hear either one of them - although W1AW/KP4 was absolutely booming in to NJ.

Instead of turning the radio off and running upstairs to warmer quarters and an episode of MacGyver on MeTV, I decided to participate for a bit in the NAQCC 160 Meter Sprint.  Just for grins and giggles, I did the search and pounce thing for better part of a half an hour, and also called CW for about 15 minutes or so.

Although my W3EDP tunes up on 160 Meters, thanks to the dazzling auto tuner inside the KX3 (I'd swear that thing would tune up a strand of wet spaghetti), I was probably sending RF into the HF equivalent of a rubber duckie antenna.  Even so, with 5 Watts I made 10 contacts, ranging from Maine, down to North Carolina and as far west as Michigan.  Not a band burner in any sense of the concept; but satisfying enough for an evening that looked pretty bleak, Foxhunt-wise.

What was also satisfying is that, thanks to a great suggestion gleaned from Facebook, I successfully stowed away my magloop antenna.  A few weeks ago, I went onto the DIY Magloop page and asked for suggestions on how the various members stored and carried their loops.

One of the suggestions was a stuff sack - a nylon bag with a draw string that normally you would use to stow away a sleeping bag or other camping equipment.  I went to Amazon and purchased this in the 25" (63 cm) version. 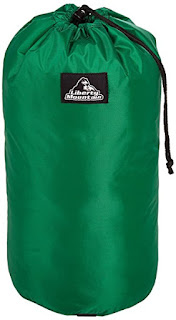 It's made by Liberty Mountain.  The longest piece of the antenna fits with room to spare, and the coiled up loop of LMR400 went in very nicely.  It doesn't look like as picturesque the above photo, as I'm not stowing away a sleeping bag - but it will serve its purpose very well.