Today was experiment Numero Uno in my quest for a "shortened" vertical antenna to use for the Skeeter Hunt and other portable operating sessions when a tree is not available and I have to rely on using my Jackite pole as an antenna support (for other than the PAR ENDFEDZ as a sloper).

Today I went with the EARCHI 9:1 UNUN using a 24.5' wire radiator.  The day was hot and muggy, so I waited until about 4:00 PM or so to begin experimenting, a bit after the worst of the sun was over. I set up my "mast support" to hold the Jackite. Nothing more fancy than a piece of angle iron hose clamped to some PVC pipe large enough to accommodate the Jackite. 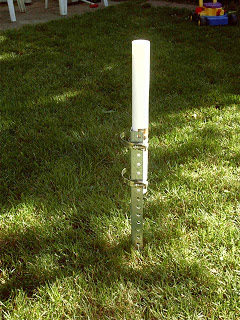 I started on 40 Meters. The KX3 tuned the wire up, but I could tell it wasn't enjoying the job. The relays in the autotuner clacked for quite a while; but I finally got about a 1:1.4 match. I listened around 7.030 and heard Alan W4MQC calling CQ.  Alan had a 579 signal with some deep QSB, but I gave it a shot, called him and he came back to me. 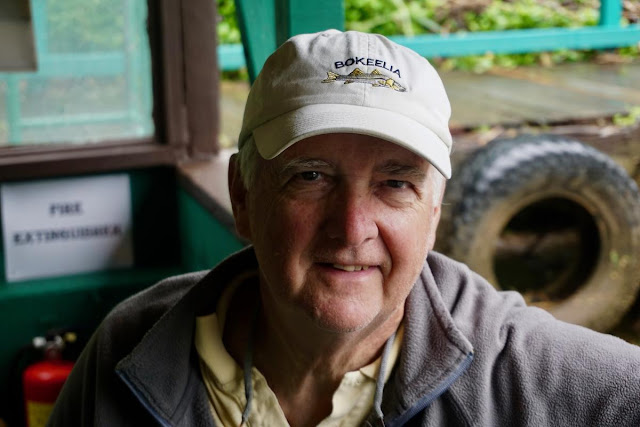 It's been a while since we've QSOed and we enjoyed a short (about 15 minute) rag chew. Alan was operating from a log cabin up in the New Hampshire mountains. Talk about beautiful and idyllic! If you want to see a great summer time operating location - check out Alan's QRZ page. Color me envious! Alan gave me a 579 in return including a report of QSB on my signal as well.

From 40 Meters, it was a short hop over to 20 Meters. The KX3's autotuner much preferred 20 Meters. Just a short "brrppp" of the relays got me a 1:1 match. It was there that I heard Michel F6FJI calling CQ. He was a pretty good 579, so I figured "What the heck?" and gave him a call. Well, when you've got this as your antenna, it's no wonder he was able to pick out my signal. 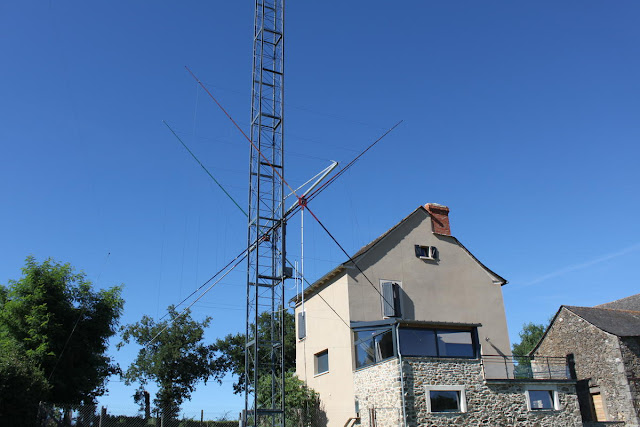 Michel gave me a 559 and we had a short QSO. A little bit more than "UR 599 TU". I got an honest RST report and gave him an honest one in return. After a small chat about location and weather, Michel signed off and I turned off the rig and tore down so I could begin cooking dinner.

My impression of this set up was "Meh", although any time you cross the Atlantic with 5 Watts is no small chunk of change.  Serviceable, and certainly better than nothing, but not exactly spectacular, either . Not that I expect the sun, moon, planets and stars from a shorty compromise vertical; but I would like something that doesn't seem to throw my KX3's autotuner into fits.

Next weekend, I think the experiment will be with the 28' radiator and the tape measure counterpoise, ala' WB2LQF and Elecraft.