It's August 14th, and each year on this date in the Roman Catholic calendar, we celebrate the life of Maximilian Kolbe, SP3RN.

Maximilian Kolbe was a Franciscan priest who lived in Poland. Fr. Kolbe was a Ph.D. level philosopher and an insightful theologian. He opened a monastery which was devoted to spreading the Word of God. In addition to printing many publications, he also used radio - hence his Amateur Radio call sign SP3RN. 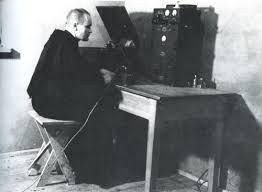 In 1941, Fr. Max's monastery was shut down by the Nazi SS and he was taken prisoner. Kolbe was sent to the Auschwitz concentration camp, where he was assigned Prisoner #16670.  In July of that year, ten prisoners were condemned to death in retaliation for an escape attempt from the camp.  Among the condemned was Francizek Gajowniczek, a Sergeant in the Polish Army.  Gajowniczek pled for his life as he had a wife and children.  Kolbe stepped out of line and offered his life in place of Gajowniczek's.  The Nazi commandant accepted the exchange and sent Kolbe to a camp starvation bunker where he was deprived of food and water for nearly two weeks.  Maximilian Kolbe died on 14 August 1941. He was the lone survivor of the ten sentenced to death, and his life was ended by a lethal injection of carbolic acid.


There is a St. Max net that operates every weekend.  I try to check in when I get the time and remember to do so - and the St. Max net is one of the reasons why I keep a microphone as part of the shack's equipment list.  It's a great group of guys and is interesting to listen to.