January 28th, 2019 marks the 40th anniversary of my very first QSO as a Novice, way back in the Stone Age. We tapped out messages on rocks, you know! Well. actually .... we only used rocks when it was too wet to send smoke signals, or the drum skins were broken.

Seriously ..... although I passed the test back in November of 1978 and got my license the last week of  December 1978, it took a while for me to put my station together. My transmitter was a used Drake 2NT from Burghardt Electronics that my parents gave to me for Christmas that year. I had to build my Heathkit HR-1680 receiver, put up my antenna (or what I called and insisted was an antenna), and figure out how the whole mish-mosh went together. After the licensing class that I took was completed, I had no Elmer. I was on my own and learned by trying things, making mistakes, fixing them or trying something else. Looking back at it, it's a wonder I didn't fry myself, or the house.

I was working at the North Brunswick Camera Center Annex store in New Brunswick, NJ at the time. Since I had to work on Saturdays, Monday was my day off. That was kind of neat because having Sundays and Mondays off, it always felt like a long weekend, even though it wasn't.  So when I made this first QSO on a Sunday afternoon, I had the whole rest of the day AND Monday to keep at it and make some more. Those were the days!

To be honest with you, I don't remember if that first QSO was a result of me calling CQ or me answering a CQ. All I remember was how nervous I was, making that first solo flight all by my lonesome. 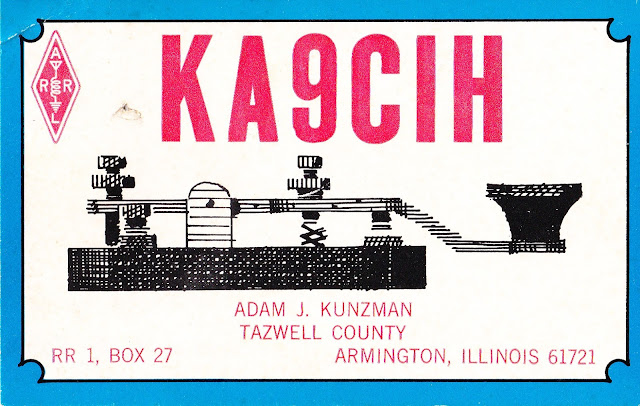 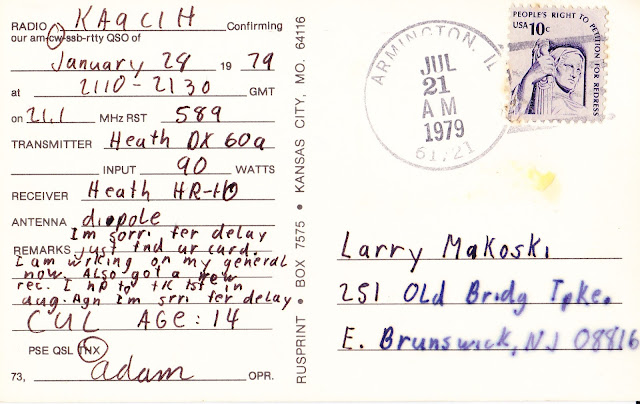 I certainly don't remember the QSO lasting 20 minutes, but exchanging the basics at 5 WPM probably took that long! After getting that first contact under my belt, the following QSOs got easier and easier.

A couple of things:

I see KA9CIH states he was running 90 Watts. I guess that was Watts input, because of memory serves me correctly, Novices were limited to 75 Watts output back in those days.

Look at that 10 cent stamp! I think the price of a 1st Class stamp either just went up to 55 cents; or it will be very soon. Paper QSLing is becoming way too expensive!

Here was my QSL card at the time: 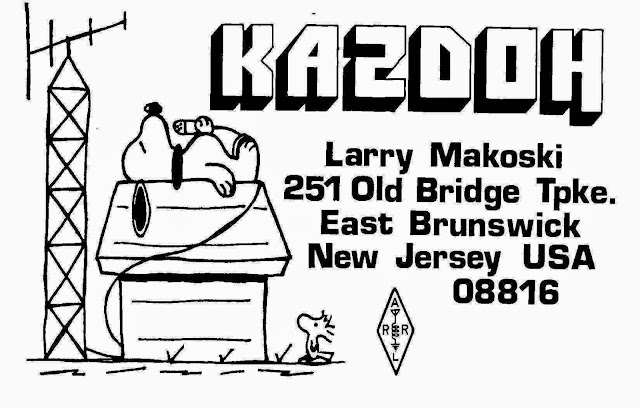 That was homebrewed by yours truly, as well. The poor attempt at drawing was mine (Apologies, Mr. Schulz!), but the typesetting was done with Letraset. Letraset was letters on transfer sheets. You would line up the letter on your work surface (what the commercial art world calls a "comp") and you would rub the back of the Letraset page with a stylus and the letter would adhere to the comp. After you got all the lettering done and the "comp" was finished, you would take it to a print shop, where a lithographic negative would be shot and that would be used to make an offset printing plate.

It seems so primitive now in the day and age of computers and desktop publishing - but that was the process 40 years ago.

I looked up Adam's name on QRZ and it would appear that he's no longer licensed. KA2DOH eventually became N2ELW and later W2LJ. Still going strong, 40 years later with no intention on quitting anytime soon!