Unfortunately, there's not a lot going on for me in the "on the air" world right now. The last big event for me was FOBB. Since then, I have been bogged down with yard work and now my left calf and hamstring muscles have decided to remind me of my age. I guess I overworked them when the tendinitis in my right ankle and knee flared up.

But in the meantime, I keep eyes and ears open for neat stuff. I've come up with two things. This first was spotted on the DVRA Facebook page.  The DVRA is the Delaware Valley Radio Association, which is more or less based out of the Princeton/Trenton area of New Jersey.  They've been around for a long, long time and posted this Hamfest notice back in 1939. 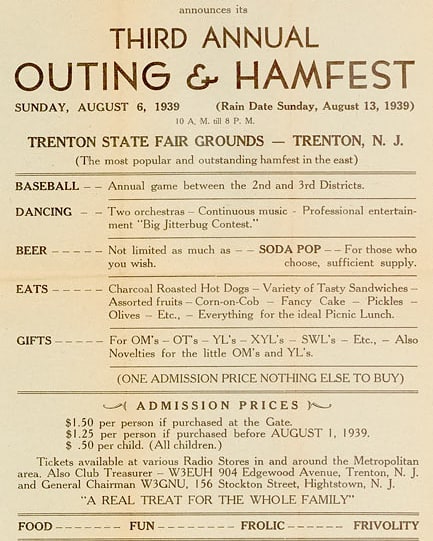 Wow! Can you believe this? This ain't your normal Hamfest - this is your Grandpa's Hamfest! And from the looks of it. buying and selling radio gear seems to be the last thing on everyone's mind. This was a downright picnic on steroids!

Two live orchestras for music, a Jitterbug contest, a baseball game, lots of food (with a variety of tasty sandwiches - dollars to donuts some of them were ......ham!), plenty of prizes and gifts and it was scheduled to run from 10:00 AM until 8:00 PM. This was probably the social event of the year for this club. I can just picture in my mind's eye the washtubs that were filled with ice holding bottled beer, soda and probably watermelons. Big cubes of block ice from the local ice house that you had to use an ice pick in order to make what we would now call "ice cubes", or crushed ice.

Notice there's nothing in the announcement about buying and selling stuff. And it kind of figures as back in 1939 you built your own gear. Yaesu, Kenwood and Icom didn't probably even exist back then - at least not here in the States. If Hams got together at that time to buy and sell stuff, it was most likely parts that you might need for whatever your next project happened to be. Boy, to be able to go back in time!

The other thing I picked up on was this YouTube video that Marv K2VHW had posted to the SPARC Facebook page. It's for an MFJ antenna.


It looked very intriguing to me, so I bit the bullet and ordered one. What the heck, right? It should be delivered to my door tomorrow from the tracking number that MFJ provided, and I hope to use it for the Skeeter Hunt.  Cotton Street park in town has more than enough real estate required to deploy this.

I know, I know, I don't normally buy antennas, other than my Butternut or the GAP when I had that many moons ago. I'm the big advocate for building your own antennas - so what's going on? Not sure, I was just intrigued by the video and decided to plunk down the coin, almost as a whim. If it works as advertised, then this will be my antenna for Field Day next year for the CW station. The W3EDP works well, but the results as seen in the video seem to indicate a much better match than the W3EDP.