I didn't participate in FYBO yesterday. By the time I got back from Pep Boys, I was a little bummed out. I was told that the check engine light indicated that the catalytic converter wasn't functioning properly. Let's just say the repair would cost the equivalent of a couple Begali keys, or would easily cover the cost of a KX2 or KX3.

Instead, I hunted for some of those State QSO Party stations - the beginning of my personal challenge. I was surprised how easy it was to work two British Columbia stations. The VE7s were plentiful and loud on 20 Meters. I had two QSOs in the log within minutes. The Minnesota QSO Party was almost as easy, stations were loud and plentiful, too.

Vermont was another story. 40 Meters was the band for hunting in the afternoon as Vermont is way too close for 20 Meter QSOs. I worked KE1VT early and easily. But where were all the rest of the Vermonters? It seemed they were as scarce as hen's teeth. I worked Kevin again later at night on 80 Meters, but I really wanted to get a different Vermont call in the log. I hunted and twiddled and listened for a long time. As it turned out that second QSO had to way until today. I worked K1VMT this afternoon on 40 Meters again.

I got another nice surprise in the mail. My QSL cards and certificate arrived from the DVRA for the W2P and W2T Special Event. 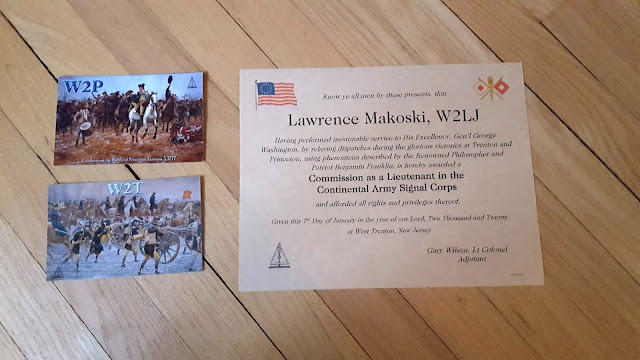 These are going to be framed and hung on the shack wall. Thank you Delaware Valley Radio Association!

Another pleasant surprise came this afternoon, as I got into the car to make a short drive to run an errand. The "check engine" light went out on its own!  A friend had mentioned to me that there was always the possibility that the problem could have just been a "false positive" read by a sensor. He told me to keep an eye on the instrument package, because if that was the case the light would go out after driving for somewhere between 10 - 20 miles. It turned out he was right! You can't imagine how happy that made me.

In a totally unrelated matter, I am selling a couple keys from my collection to raise some dollars to make a different Amateur Radio purchase. I put two keys by  LLAVES TELEGRAFICAS ARTESANAS up for auction on eBay: