I had a good time, despite a few glitches.

First off, Emily WC3R contacted me during the week to ask me if I'd be interested in being either a Cookie Monster or a Burnt Cookie. I asked her which she needed more and she replied "Burnt". Hmmmmm ..... I was happy to volunteer, but I made up my mind right then and there that I would only call CQ. I would not hunt and pounce and go out of my way to give people negative points. That may not be what the organizers intended, but it felt like the way to go for me. After the fact, I have heard from a few people who have told me that they heard me rather well, but once they heard me give out "Burnt" as my name, they did not respond to my CQs. So my QSO total was probably less than it could have been, but so be it.

Then, in the middle of the contest, the KX3 began acting up. Whenever I went near the cable that connected the battery to the DC Power Socket, the rig shut down. Once it happened in the middle of a QSO.  So I took the rig apart, and took that half down to the shack to re-solder the connections of the jack to the circuit board.  Problem solved!

Oh yes, I ran down to the shack. That means I operated backyard portable from our patio table. 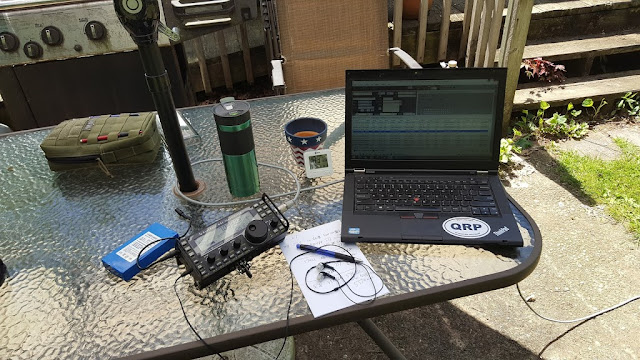 I think this was the first time that I have used my laptop DURING a sprint. I usually log on paper and transfer later. The QSOs were not coming hot and heavy, so there was time for this uber slow typist to add them to Log4OM in real time.

The antenna was the PAR END FEZ which was being supported by Jackite Pole in the bottom photo. I bungeed the Jackite to the swing set and then ran the wire down to the patio chair in the foreground (I didn't want the end touching the ground). It's funny, my two kids are in college, but I haven't gotten rid of the swing set as it serves as a very good support for the Jackite. That's going to change this summer, though. That structure has seen better days and needs to come down.

In all, I made 13 contacts. Nine were with other Cookies and four were not. I made three contacts on 20 Meters, nine contacts on 40 Meters and one contact on 80 Meters. Yes, to my great surprise the KX3 was able to load up the PAR on 80 Meters for one final QSO of the day with the Cookie Queen herself, Emily WC3R.  In addition to working Emily, it did this ol' heart some good to hear such familiar calls as Jim W1PID, John K4BAI, Marc W4MPS and John Paul AB4PP - but thank you EVERYONE for the QSOs - and I apologize for having to be the bearer of negative points.


There was never a hobby as hip
As allows us to chase the skip
The waves they do propagate
And to radios our ears do mate
To hunt down the vaunted chocolate chip.

OK, OK ....... I know, I'm no great author or poet, but points are points! Easy enough to get for composing a bad limerick, but not enticement enough for posting a photo of my ugly mug chomping on a cookie. Between QSO points and bonus points, I ended up submitting a score of 9,354 points. I'm sure that will land me somewhere from middle to bottom. But that's fine because I had fun, it was a gorgeous day weather-wise AND ...... I was not at work!