Weather-wise, it was a near perfect day! Temperatures were in the low 80s F, humidity was low, there was a very slight breeze that made it feel super comfortable for being outdoors.

I headed to Cotton Street Park just a few minutes after Noon. I gave myself plenty of time to set up and I was ready to go with about 15 minutes to go before the starting gun sounded I decided to use the MFJ-1982LP and the Jackite pole as I mentioned previously. I really should have just relied on one of the tall trees in the park as a support for the antenna, but I guess I wanted another go at setting it up. Of course, the support mechanism that I was clued into by Dave KD2FSI worked flawlessly and I had the antenna up in two shakes of a lamb's tail. 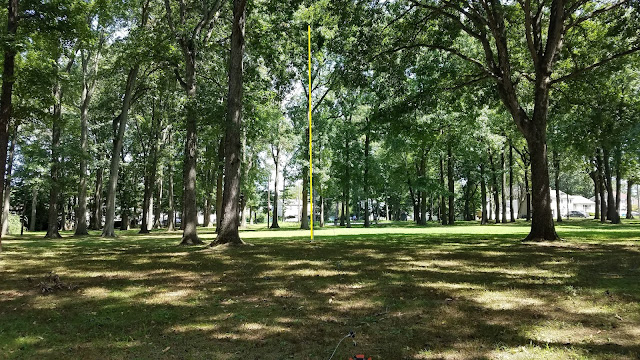 The Jackite just blends into the background for the camera, so I highlighted it with yellow so you could see how I positioned it. The antenna ended up running pretty much due north and south -with the lobes reaching out to the east and west. Hindsight being 20/20, I probably should have had it pointing NW to SE which would have had the lobes covering a majority of the country. Next time. The rig, of course, was the KX3. I always keep the Bulldog Clip paddle and an American Morse paddle in the backpack, but I decided to spend the day using the attached QRP Guys paddles, which I really enjoy using.

I've had this camping table for over ten years now. It's nice to have for portable ops, but sometimes it gets really bouncy and is more like a trampoline than a table. It's small, and lightweight and that's what counts. The chair I use has a side shelf, but it's hinged and is really too small to comfortably and reliably hold the radio. I have these visions of me reaching for the radio and pushing down on the shelf accidentally, causing the radio to fall. and go kablooey.  I use the side shelf to hold my log - yes, I use paper and pencil when I log portable sprint ops. I'm not coordinated enough to type into a tablet or my phone AND try and make as many contacts as possible in a limited amount of time. Other times, when it's just "casual" operating, I'll log using my phone or tablet as I have the luxury of stopping what I'm doing to get the information into HamLog NG. When time is of the essence, I resort to ol' reliable pencil and paper. (I have a story to tell kind of relating to "pencil and paper", but that can wait for another day - maybe tomorrow). 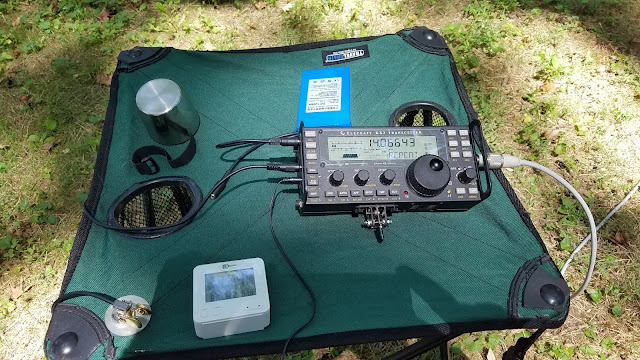 The first hour seemed slow and I made about 10 contacts. There was a ton of EU stations participating in a DX contest (all the way into "QRP Territory"). It was hard to pick out the Skeeters, The Europeans, who must have been running power, were very loud and were running roughshod over the Skeeters. Things picked up after that first hour, and I ended up making 31 QSOs - 29 with Skeeters and 2 with "5 Watters". I think my best DX was working Myron WV0H in Colorado.

The QSOs seemed to be evenly spread between 40 and 20 Meters - I kept switching back and forth. When one band would seem to dry up, I'd switch and make a few contacts on the other.  Switching back after a bit would then reveal some stations I hadn't heard before. QSB was horrendous all day. Take for example Rick NK9G. One minute he'd be blasting the earbuds right out of my head, the next minute he'd be S3 at best. I think a lot of us battled with that all afternoon.

15 meters was dead the few times I tried it, even all the way to the bottom of the band, where you might at least expect to hear a station or two. I tried 80 Meters twice and the second time, I was rewarded with hearing Mark NK8Q calling CQ and we completed an exchange on that band.

When the action on the band lulled, I took a few photos for the social media bonus points including one of this ugly guy. 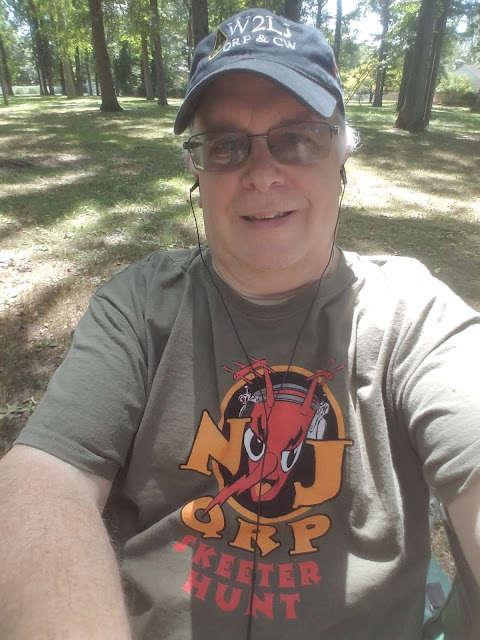 And then later in the afternoon, I had a visitor (actually two). 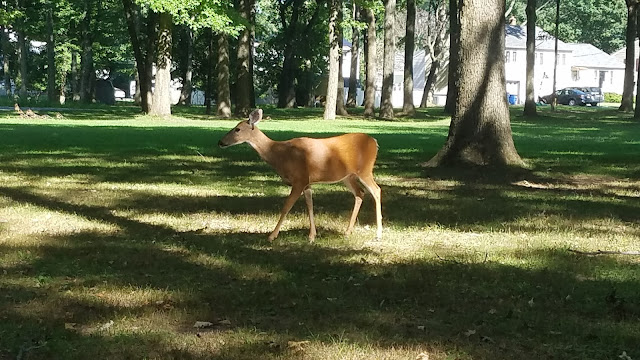 Usually, I get a human visitor or two, but this year it was of the hooved and ruminant kind. They checked out the funny looking tree (Jackite) sticking out of the ground. They were probably disappointed that it had no leaves for them to munch on. I remained sitting quietly working stations and they approached cautiously, coming as close as about 10 feet (3 meters) from me before wandering off to a more prodigious food area of the park.

Tear down went quickly and I was home within about 20 minutes from when I started taking things apart. The Home Depot bucket lid antenna winder that Dave KD2FSI made for me worked like a charm! No kinks or tangles when I unwound and deployed the antenna and none when I wound it back up. His idea was pure genius!

Thanks to all of you who gave me QSOs and participated in the Skeeter Hunt. If it wasn't for you guys this event would be a big flop. To take a line from the song, you are the wind beneath its wings. I'm already thinking about next year's Hunt, even though there's still lots of work to do before the 2021 Hunt is in the books. Let's hope that 2022 provides more sunspots!