Wild and wooly - but blessed

Tropical Storm Ida paid us a visit yesterday. I can only imagine what Louisiana is like after she got through there. It was a dark and dreary day all day, but the real rain didn't kick in until just as I left work for home.

After I got home, (which took an hour - usually it's a 45 minute trip) it got worse. By 2:00 AM (when I finally got to bed last night) we had accumulated 9.50 inches (23 cm) of rain. My daughter Cara got home from Rutgers before I did, so she was safe. My son Joseph had a class until 8:40 PM. He texted me to say he was on the way home after class and I told him to either find a campus building to hunker down in; or just sit it out in his car at the University parking lot. The parking lot is a solar farm and is on high ground, and for all intent and purpose, the cars are covered. He told me he was going to recline the driver's seat back, and get a snooze.

My wife Marianne could not get home. Around 8:30 PM she texted me to let me know her car was stuck in water. I tried to drive out to where she found shelter, in a Petco Pet Store right next to her dialysis clinic - but I was turned around. The streets were flooded and impassable.  I texted, asking her why she didn't just go and re-open the clinic (cots/stretchers there) and stay there, and she told me the entrance was blocked by waist high water. By 11:00 PM her car in the parking lot was under water to the roof line. 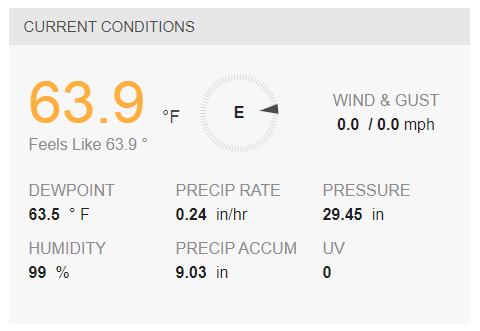 Conditions at the W2LJ QTH at 11:00PM Local last night with rain still coming down

Added to all this craziness, my cell phone was beeping and buzzing all night with severe weather alerts, flash flood warning alerts, tornado warning alerts and the like. The Middlesex County Office of Emergency Management volunteers and South Plainfield CERT volunteers were all keeping in touch via GroupMe and the various repeaters. It was a hectic evening, to say the least.

The rain started easing up after Midnight, enough so that my son was able to navigate his way home by about 1:15 AM. At 2:00 AM, just before trying to get a few hours sleep, I texted my wife, advising her to get some rest if possible, and that I would pick her up around 5:00 AM after giving the floodwaters a chance to recede. Before hitting the sack, I checked into the local Skywarn Net to give our rainfall total.

When I got to where Marianne had sheltered, her car was no longer under water, but it was totally dead. Totally dead - like "dead as a doornail" dead. Dead to the point where I couldn't shift it into neutral to try and push it to a better, out of the way spot.

I called the police to let them know where we left it. I went online and filed a claim with our car insurance company. They are going to have it towed and provide a repair estimate. If it's not totaled,  I will be gobsmacked. It's a 10 year old Ford Fiesta and my wife told me that as the car was being covered by water, the lights came on by themselves and the trunk popped open. Total electrical system blow out. When I opened the doors, water did not come gushing out, but the seats and seatbacks were soaked like wet sponges. It's a mess. I can't imagine a 10 year old car would be worth even trying to repair at this point.

But even with all this, we are blessed. We are all safe and sound - even though (except for my daughter,) we all had wet socks, pants and squishy shoes from wading through various depths of rainwater. Some 25 miles or so to the south of us in the vicinity of Trenton, NJ there was a lot of tornadic activity. From what I was able to gather from various media sources, several homes were destroyed.

We never lost power at home and our basement remained dry as a bone - which is more than I can say for lots of my neighbors. We are all safe and injury free and for that I thank the Almighty. A car can and will be replaced - my wife, son and daughter cannot.

Thank you, Lord, for being with us through the eye of the storm.