Another Field Day has come and gone. This year was not without its surprises, but as Clint Eastwood said as Gunnery Sargent Thomas Highway in "Heartbreak Ridge" - "You improvise, adapt, and overcome!"

The week started with a Proclamation of Amateur Radio Week in South Plainfield by our Mayor and Borough Council. 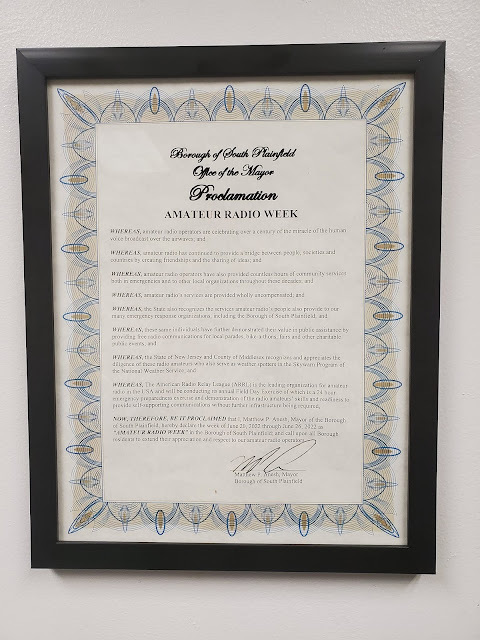 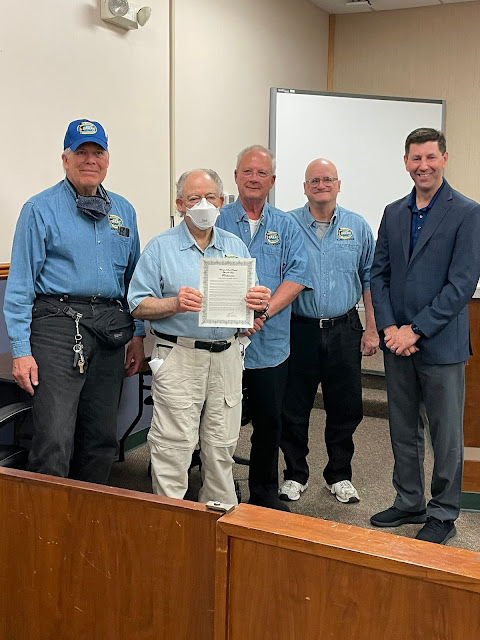 Unfortunately, I was not able to attend the Council meeting as I'm still going to physical therapy for my hand twice a week. But we were well represented by Ron N2LCZ, Marv K2VHW, Bill W2AOF, and Harry KC2PGX. Mayor Matt Anesh is standing to the right. By the way, Matt's father, John AB2VE is a member of SPARC.
Field Day 2022 arrived itself on a day quite beautiful - sunny, blue skies, white puffy clouds - but HOT! I made the grocery shopping trip for the family first and when I arrived at the Field Day site at Putnam Park at about 10:00AM it was already in the 90s! (30s C)
Setup went without a hitch and we were able to actually sit for a breath before the main event arrived at 1800 UTC. 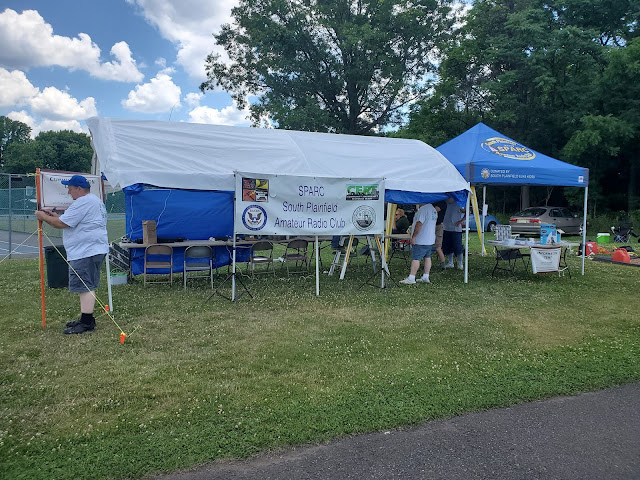 The "Communications Center" was a 10 X 20 carport and two 10 X 10 pop-up canopies. The carport was donated to the club by Marv K2VHW and worked out exceedingly well. We improvised sides using tarps which would have kept out the inclement weather, if we had gotten any. They were rolled up on the front side, but we kept them in the down position on the backside. This was a heckuvalot more economical than the commercial tent that Dave KD2FSI used to so generously rent for us. 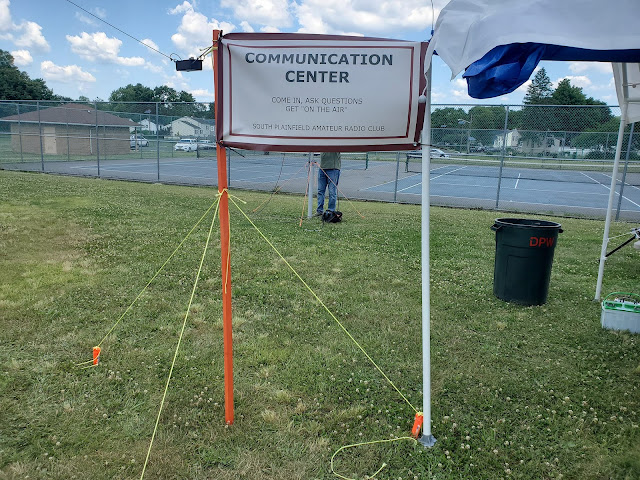 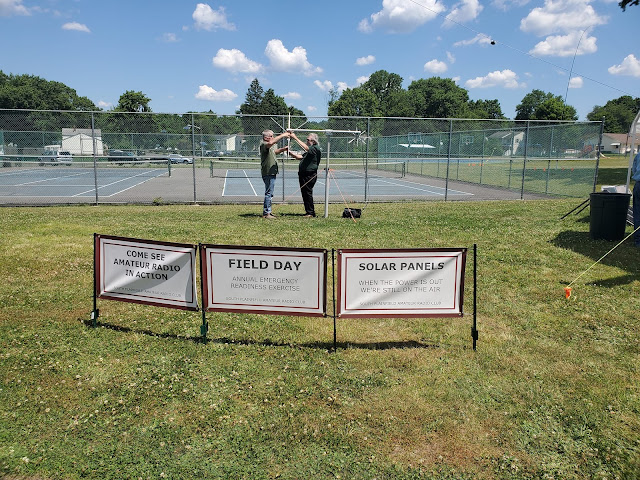 A few years back, we purchased some small banners from Vistaprint to help visitors who are not familiar with Amateur Radio to let them know what they were looking at. That's Dave KD2FSI and Eric KD2ONY setting up the satellite antennas in the background. 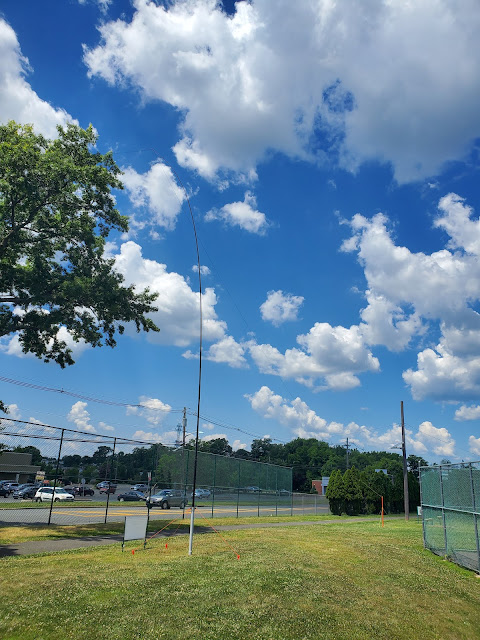 This is a picture of Dave KD2FSI's 80-10 Meter end fed antenna, set up in an Inverted Vee configuration. Dave has the QRO version and I have the QRP version - both from MFJ. Dave's was oriented North and South, while mine was oriented East and West. More about mine, later. 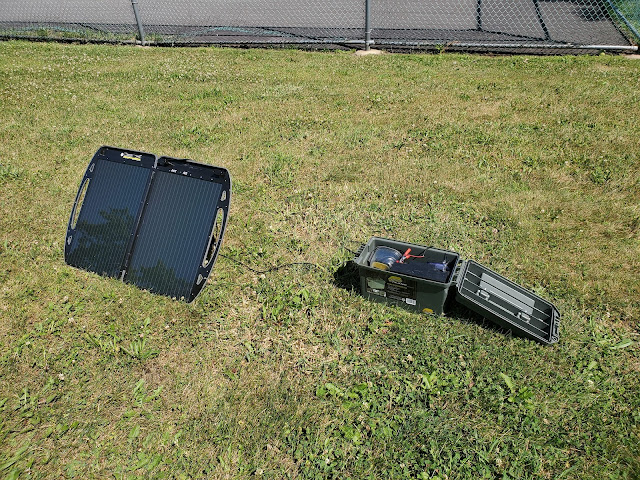 My solar panel just topping off my PowerWerx battery before festivities began. 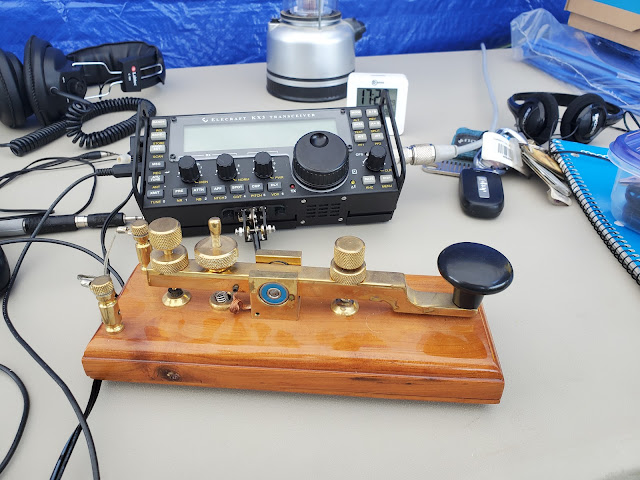 We remembered Bill Koeth W2WK who became a Silent Key earlier this year by having one of the keys he handbuilt at a place of honor at the Field Day site. I'm lucky enough to be able to call this one "mine". 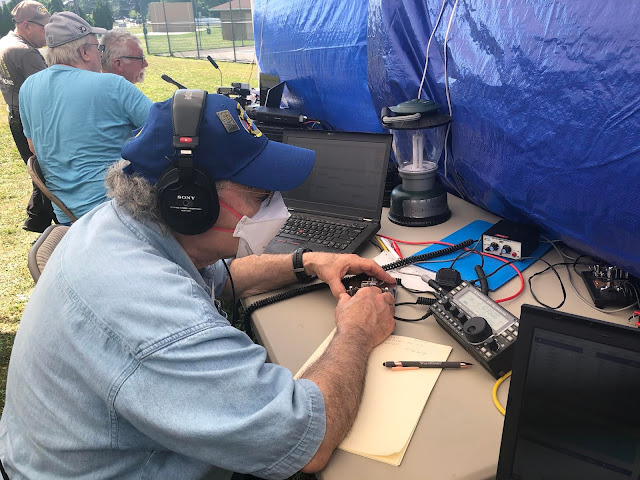 Marv K2VHW getting a little CW in on 20 Meters. I stayed mostly on 40 or 80 Meters. We split operations at the station Marv was sitting at in this photo between CW and SSB modes. I'll explain why, in a bit. 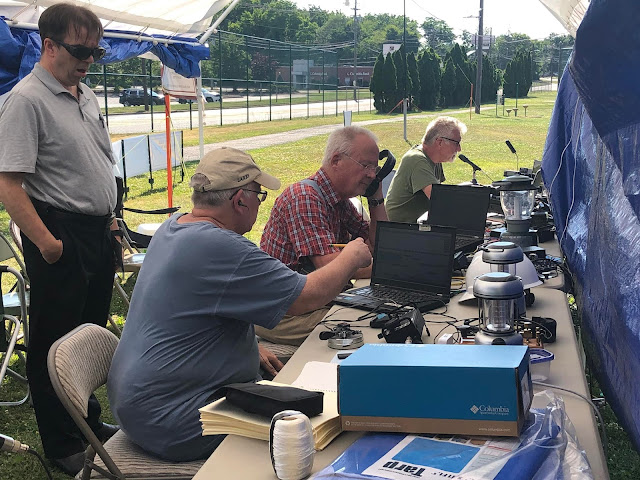 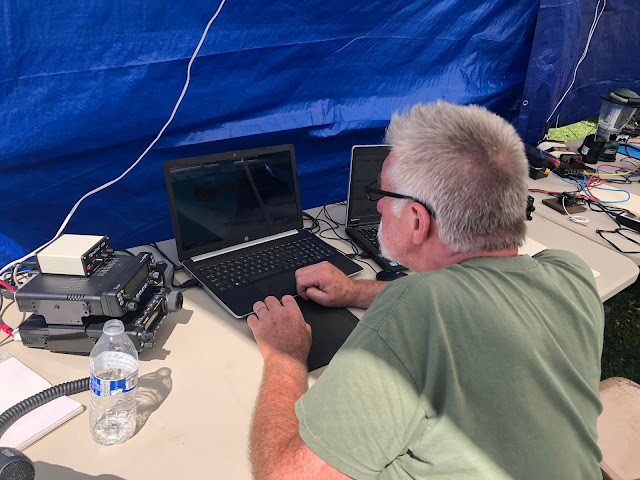 Dave KD2FSI was our digital and satellite op. Dave was quite successful in making FT8 contacts and VHF/UHF contacts. The satellite end of things was not so quite as cooperative.  You can see Dave's empty water bottle there. Bill W2AOF brought a huge cooler and it was filled with ice covered bottles of water, Gatorade and cans of soda. That was a vital component of our 2022 Field Day effort. Without hydration, we would have been calling on EMS to cart us away! 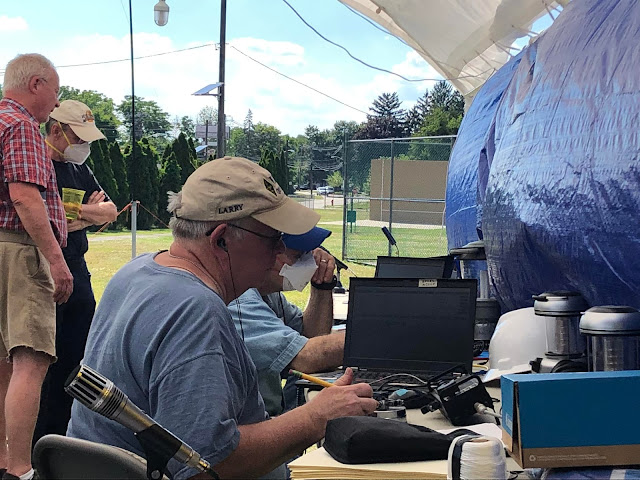 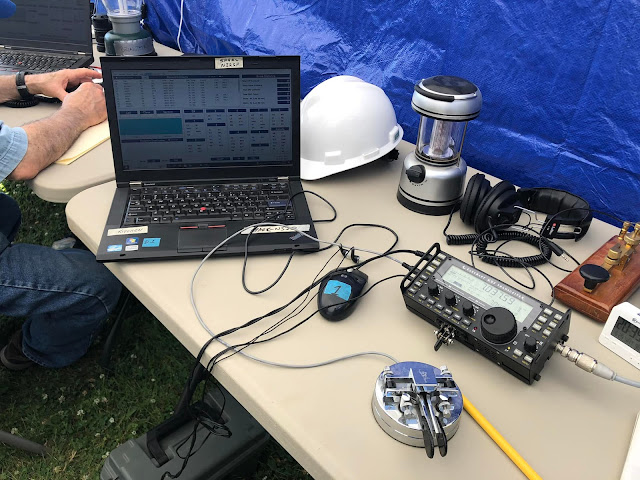 My 40 Meter CW station set up. 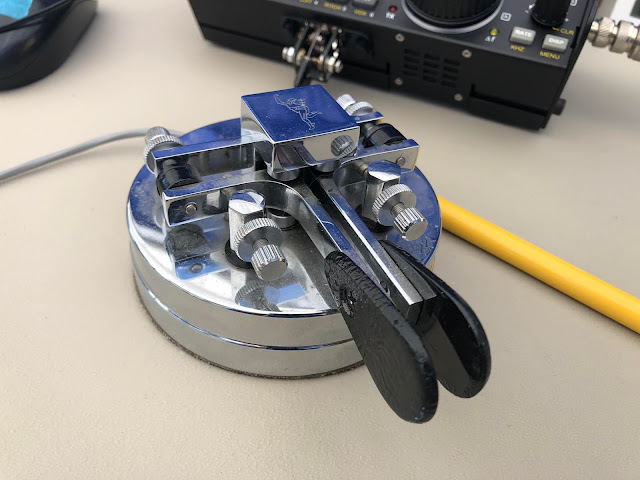 I brought my Bencher Mercury paddle for use at Field Day. I love it's action and it's feel. However, no one and I mean absolutely NO ONE but me touches my Begali paddle. That was safe and sound on the operating bench at home. 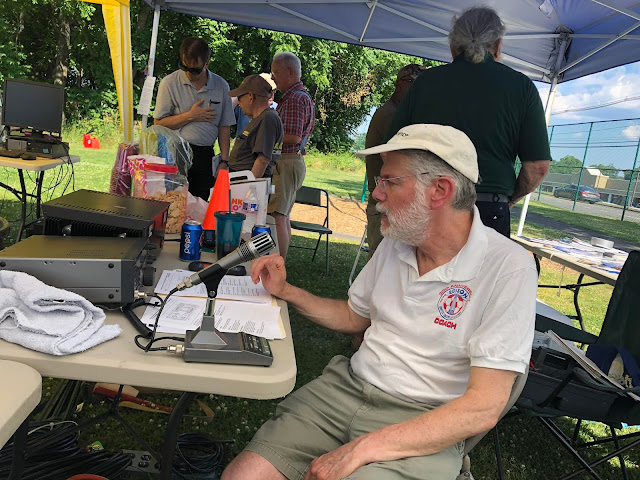 Neil WA2EGE getting in on the action. 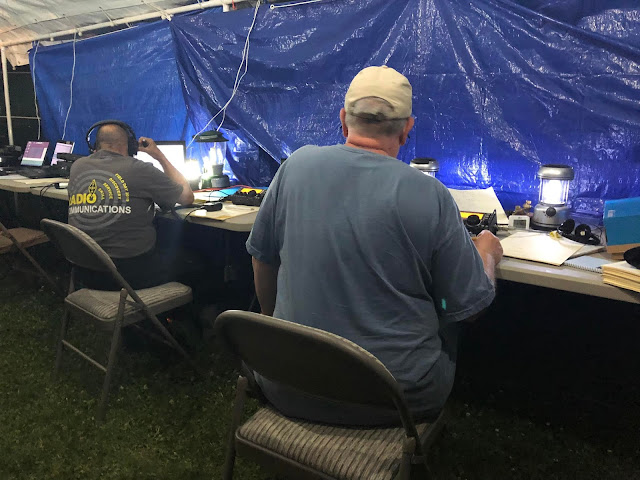 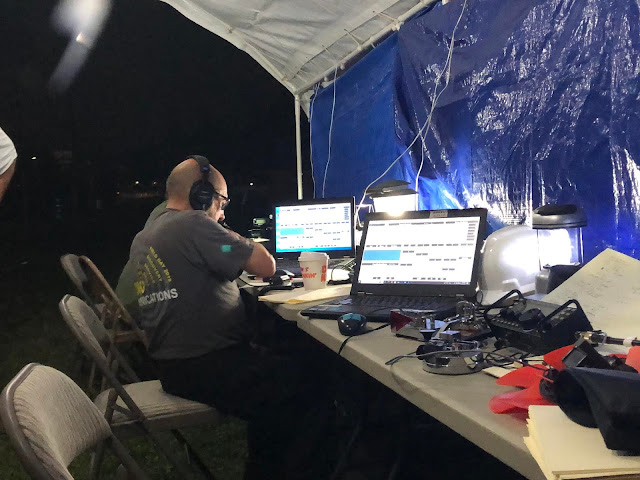 The overnight - the toughest part of Field Day! 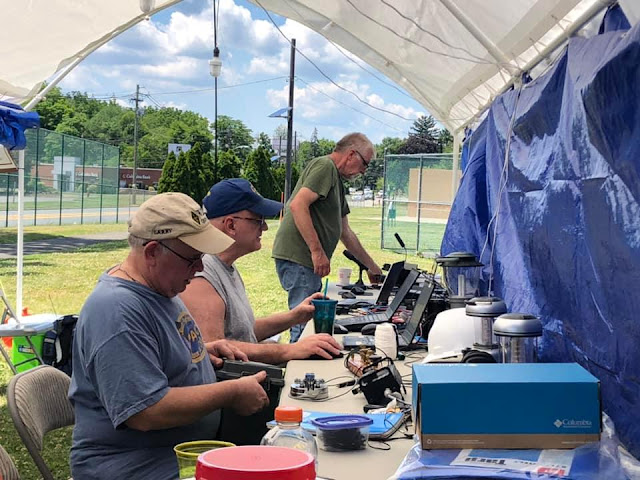 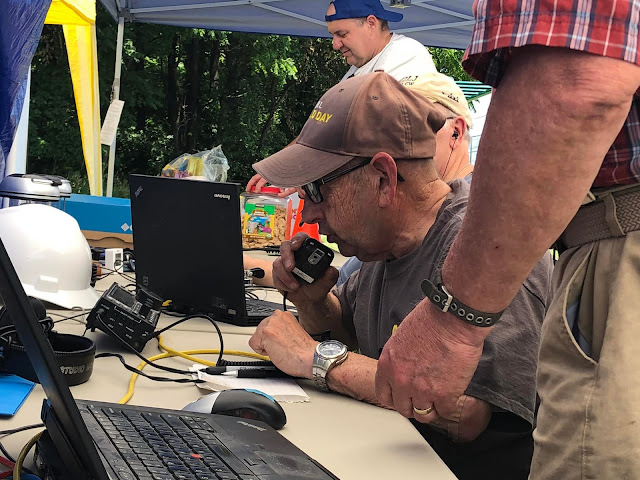 Marty W2BEW was our primary SSB op and as usual, did an outstanding job!

W2LJ looking at the rig in frustration. QSB was terrible on Saturday. I'd answer a station calling "CQ FD" at 20 over 9, only to have them go down below the noise floor when they sent their exchange. On the other hand propagation was decent and we were able to work just about anyone we heard. We were putting stations in the log at a decent rate until about 11:00 PM or so local time, and that's when a potential disaster struck.
Around 10:00 PM or so, we had a visitor stop by, Antoinette KK4TTX who is a Ham who had re-located to New Jersey from North Carolina. She's a Tech who has been off the air for a while and she wanted some tips and pointers on antennas, about the local repeaters up here as well as the inside information about clubs in the area. We sat and talked for about a half hour or so and when she left, I sat down at the rig and switched over to 80 Meters. The band was busy and there were lots of loud signals. I called a few loud stations only to have them come back to me calling "CQ FD" once again. That was not a good sign to say the least! Something was wrong, even though the KX3 looked fine and was its old reliable self. Dave KD2FSI came over to me with his RigExpert analyzer (I really have to save up to buy one of these!). and he attached it to my MFJ end fed only to find it reading an SWR of infinity. Holy! On ALL bands!
It was pitch dark at a public park, and we were in the woodsy part of the park with no commercial lighting (the park is usually closed after dark, but we were granted permission to remain overnight) - so what do you do? We limped along - we improvised, adapted, and overcame. When Marty needed a break at the SSB station, we would switch Dave's MFJ end fed over to my rig. We'd operate until either Marv or I needed a break and then we'd switch the antenna back over to Marty. Not the most ideal arrangement, but I wasn't about to make an antenna swap until first light.
First light arrived at about 4:45 the next morning and I waited for just a few more minutes until it was bright enough to take down the MFJ all band end fed and replace it with my PAR END FEDZ 10-20-40, as seen below. 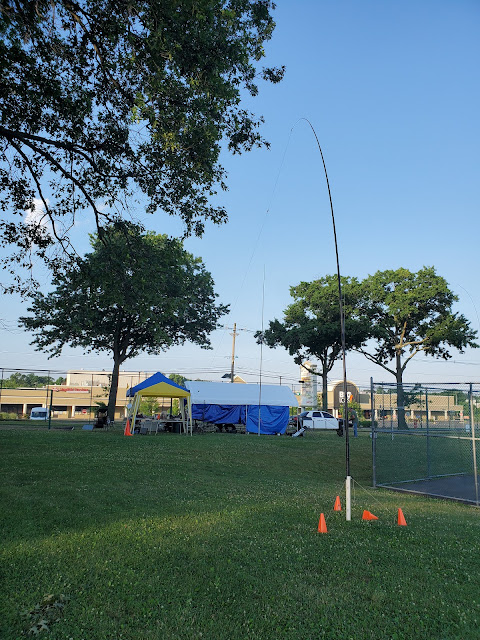 We were back to two antennas! It kind of sucked not to be able to go up to 15 Meters, but we were back to simultaneously making CW and SSB contacts and that was the important point at that moment. Once I had the MFJ coiled back on its holder, I took the screws out of the little box that is the UNUN. The toroid was fine. I viewed what I perceived to be one or two suspect soldering joints though. I am going to re-solder those properly and then give the antenna a test. If the high SWR still prevails, the only thing it could be, then, are the two capacitors inside the little black box, and I'll have to swap those out. They LOOK fine though, so I am suspecting a suspect soldering job. Even after I make repairs, next year I am going to string up the PAR or maybe my other W3EDP into one of the many trees near us so that I can have back up ready and raring to go, if needed. Like the old saying goes, "Fool me once, shame on you - fool me twice, shame on me".
All in all, it was a great Field Day! Even though since last year we re-located to a smaller Borough park from the County park we had been at, we had more visitors than ever this year! In addition to Derryck White from South Plainfield Borough Council (who, by the way, made a tremendous post about us on the Borough Council's Facebook page - thanks, Derryck!) we had John Garmendi N2DV the Middlesex County ARES Bureau Chief and his wife stop by. Eric Martin KD2ZME the head of Middlesex County CERT stopped by and we had a long discussion on CERT drills and acquainting the CERT Teams in the county that have an Amateur Radio component. We also had visits from Bill Kelly NB1LL, the local American Red Cross liaison and his wife. They presented us with a certificate for our Field Day activation. 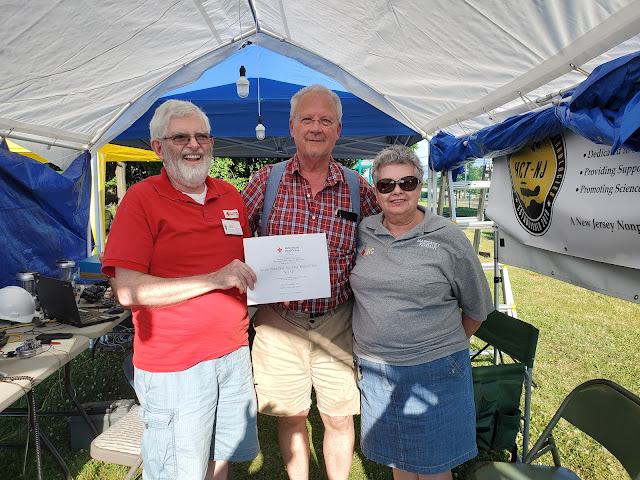 We also had visits from Ria Jairam N2RJ, our ARRL Hudson Division Director as well as members from the South Plainfield EMS Team who were interested in our operations.
I'm not exactly sure how this year's edition of Field Day will stack up against our previous efforts. Being without one of the main antennas for close to 6 hours will probably show a remarkable decline in our statistics. However, we had fun and in the long run, that's all that's important. We all went home after tear down a bit hot, sweaty, sticky and exhausted but at the same time quite content and happy. I hope YOUR Field Day was as good, if not better, than ours.
72 de Larry W2LJ
QRP - When you care to send the very east!
Special "Thanks" and a tip o' the call sign cap to Mario Labot KD2HPF for providing us with many excellent Field Day photos. 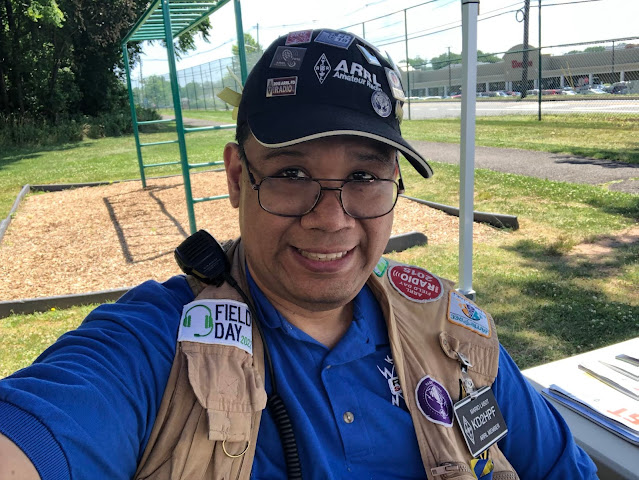