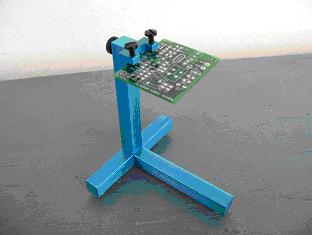 In yesterday's mail I received my Hendrick's Kits PCB Vise. This is super cool little vise designed to hold printed circuit boards during construction and repair. It stands maybe 3 or 4 inches high off your building/repair bench. Ideally, it is meant for smaller circuit boards - I would think maybe a board 4'X6" max or maybe a skosh bigger. For circuit boards larger than that, two of these little puppies would be ideal.

You can see it pictured to the right, and that's probably a Rockmite or similar sized circuit board there. Doug Hendricks is offering these vises at his Website, which is: http://www.qrpkits.com/

For twenty bucks, this vise is a steal! It comes disassembled in a package small enough to receive in the mail. I put mine together in about two minutes, tops. There's only one screw and you definitely do not need to be a rocket scientist to figure out how to put it together. It's well made and is definitely the answer that I've been looking for for holding PCBs during construction. My Panavise clone is way too bulky, heavy and ungainly. Thanks Doug, for finding a need and filling it!

You can order yours by going to the URL above; or if you're lucky enough, Doug will have a goodly supply of these at Dayton. Dayton!!!!!! How I miss going to Dayton! The last time I was fortunate enough to go to Hamvention was ten years ago; back in 1996. That was the last year that Hamvention was held in April; and the year before the very first FDIM.

FDIM, for the unitiated, stands for Four Days In May. It's the biggest get together of QRPers in the nation; and that it coincides with Hamvention is by design. I've never had the opportunity to go to FDIM; and that's a burning desire that I have. I know exactly where it's held. When I was making yearly treks to Hamvention; we stayed at the same hotels in Fairborn when the AMSAT folks used to reserve those rooms.

I would love the chance to finally meet, face to face, a lot of guys that I have been fortunate to become friends with over the air and through the Internet. There's nothing quite like the camaraderie that the QRP folks enjoy. Over the years, I've been involved with FISTS, AMSAT and other groups; but the QRP community is unique; and I've never seen anything to equal it.FISTS comes in as a close second; but QRPers are just a notch above that. We talk on the air, we exchange ideas, laughs, jokes and barbs over the Internet. The feeling of belonging that you develop with these guys, many of whom you'll never meet in person, is just an amazing phenomena!

To be able to immerse myself in that environment, for four days in May would be the ultimate. Attending Hamvention would be the icing on the cake.