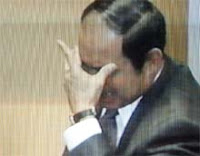 The day is here. February 23rd, 2007. A day to mark in Amateur Radio history. The day that knowledge of the Morse Code as a requirement to earn an Amateur Radio license has ended. The page has been turned.

I feel sorrow simply at the passing of a tradition. There are exceptions; but for the most part every Amateur Radio operator in the USA (and the world) who has spent any time on the HF bands all have had that common bond. I feel sorrow for the operators who will never even try Morse Code, thinking it too difficult; and at the same time depriving themselves a world of fun and excitement.

To mark the event, here are some posting that have appeared on the Internet today. They represent all points of view.

"The end of an era. The removal of the code proficiency requirement to obtain an amateur license. I struggled with learning the code for 5+ years to get to the 5wpm and even longer to obtain that coveted 13wpm and my general and advanced class tickets. Then to drive for 5 hours one way to take the exam only to fail it twice. Still I made it. NOW the ARRL is celebrating the end of the era. HORSE FEATHERS. CW is still my preferred mode of operation even if I have lost a lot of those abilities due to illnesses. The music that is CW is
still heard in my shack and will be until I am unable to turn on my K2 OR KX1. I hate to say it this but I really believe a time is coming when all the digital equipment will be useless as an old rusty horse shoe and it will be up to those who can utilize CW. I for one will not celebrate the end of an era. I will mourn it's passing and continue to use CW with my limited abilities until they put my urn in the ground."

"The really exciting QSOs are yet to come. We'll get to work OPs who were never forced to learn CW to get their licenses. They just really wanted to do it."

I kinda like that part of 40 meters. It is good to see it getting use as an unofficial slower speed CW sub-band. There is plenty of room between the broadcast heterodynes. I heard Darrel on a little earlier working a station up in WA state. They were just below 7120 and had to sign because of QRM. It turned out to be the BCC's lower sideband by all indications.

Anyway I kind of like the irony of working CW on 40 just as the rules change.

" I am sorry to see the no code rule, as I have a hard time with code,
but I am still going to work on the code."

" That is "exactly" my position on Morse. I only have three letters, the numbers and prosigns to go. I'm going to do a paper upgrade tomorrow. I have NO intention of putting the code aside. The first thing I did after passing Element 2 and 3 was to apply for FISTS membership and I'm proud to say that I'm now FISTS 12991. I can't wait to do my first CW QSO."

"With all due respect, I see no end of any era here, and nothing to say good-bye to or be bittersweet about.

As in years past, those who want to use code will, and those who don't won't, whether they had to learn just enough to pass a test or not.

As in years past, hams will be exposed to code on-the-air and it will continue to enchant some and not others. The difference is now code won't have the negative association of testing as one's first exposure.

As in years past, human copy of CW will get distant contacts phone or computer CW readers won't. Some new hams will continue to be enticed to learn it for that reason.

As in years past, there will be new hams, including some in the Extra bands, who can't maintain a 5 wpm QSO, whether they passed a copying test at that speed or not.

The era of code is alive and well, and can coexist with any new eras. As I see it, the glass is half full, not half empty."

In 1960, Generals had "all amateur radio privileges" on all bands; Extras were 20 WPM, and had to have 2 years experience as a General or Advanced (or old Class A), but had no more operating privileges than a General--just a fancy blue FCC diploma-type license, the "Ph.D" of ham radio.

So, after taking the Advanced and Extra written tests in 1977 and 2001, more than 40 years and 2 exams later I'm just right back to where I started from! And get this: an Advanced with 13 WPM **STILL** doesn't have use of all the CW sub-bands, whereas a newbie no-code Extra will get everything! All because a few moss-backs said to Charlie, "Well, **I** had to pass old elements 4A **and** 4B, whereas the Advanceds only passed 4A." Charlie bought the argument, so now upgrades from Advanced to Extra have to pass the combined new element 4 (A and B together).

So, have fun studying about elliptical satellite orbiting near the equator, Smith Charts, phased verticals, and effective radiated power--stuff you use every time you're on the air, LOL.

Incentive licensing? Sure. The Brave New World is for selling more books and study guides, selling more equipment (Are you listening, Kenwood, Yaesu, and Icom?), and making the VECs seem even more self-important than they already are. But the sun is shining today. Be happy, and smile!"

So as you can see - there all kinds of points of view out there.