Houston, we've had a problem! 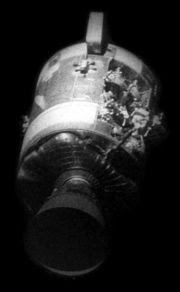 For those of you old enough to remember, it was 38 years ago tonight that those famous words were uttered.

Apollo 13 was on its way to the moon. The astronauts had finished beaming live television back to earth and were settling in for the night. One of the last things they had to do before turning in was to turn on the device that would stir up the contents of one of the liquid oxygen tanks mounted in the Service Module. Unknown to anyone at the time, that liquid oxygen tank had been dropped sometime after its manufacture and the Teflon coated wires to the stirrer motor had become compromised. The action of stirring up the liquid oxygen caused the wires to short out, causing an explosion which ripped out one entire side of the Service Module.

Electricity was generated for the Apollo missions by combining the liquid oxygen with hydrogen. The byproduct of this chemical process was the creation of water used by the astronauts throughout the journey. The tanks had to be stirred on a regular basis to prevent the liquid oxygen from becoming "slushy" and unusable,

With the tank venting liquid oxygen into space; all electrical systems aboard the Command/Service Modules callsign Odyssey, had to be shut down. This has never been done before in space and was quite the gamble; but it was a necessary one. The Apollo 13 astronauts, Jim Lovell, Fred Haise and Jack Swigert were forced to move into the Lunar Module, callsign Aquarius. Aquarius would become a lifeboat in space, literally saving the lives of the three astronauts.

There was no way to immediately turn around and come home. The astronauts had to enter lunar orbit and allow the moon's gravity to whip them back towards earth like a slingshot. The descent motor of Aquarius was pressed into service as an acceleration motor; something it was never designed to do. Fortunately, it performed its new function flawlessly.

Due to the skill and bravery of the crew; as well as that of the ground crew, Apollo 13 returned safely to earth a few days later. This was in no small part due to Gene Krantz, the Flight Director for NASA at the time. He was responsible for heading up the team that worked here on earth with the astronauts in space to do everything necessary to obtain the happy outcome. Mr. Krantz was also responsible for originating a very famous quote, which I am sure all of you have heard many times. As he met with his various engineers after the initial reports of the problem; he matter of factly told his ground crew that "Failure is not an option".

The connection to Ham Radio is that as a kid, the manned space program and NASA were preoccupations and fascinations for me. As a result, I was fascinated by all things technical; and this led towards my quest in earning my license. It was Ham Radio that got me into a career in electronics. The rest is history.