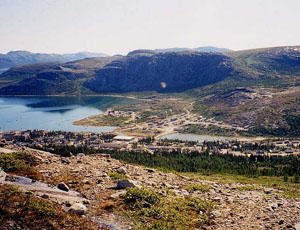 'Twas not "exotic" DX; but it was a rather rare entity; and the pileup was HUGE! When I went out to the park today at lunchtime, I found a buzz saw of stations at 14.042 MHz. Going down one, I heard VO2A the DXpedition to Paul Island (NA-205), off the coast of Labrador in Canada.

There were a ton of Europeans calling, EA3, G3. UA9, HA5 were among some of the prefixes I heard. Labrador isn't so far from New Jersey in terms of the world of DX; but I thought I'd give it a whirl.

And about 10 minutes or so in, I managed to break through, putting 5 Watts into a Hamstick which was nestled in some tree limbs because of where I had parked the car.

The K1 doesn't have "true" split capability; so I had to set the K1 to the transmit frequency (where I was guessing that VO2A was listening) and I used the RIT control to tune "down 1" where VO2A was transmitting, so I could hear him. There's also a XIT feature on the K1 which will allow you to do the same thing, but basically the other way around; but I haven't really figured it out yet.

Soon after I worked VO2A, it started showering; so I packed up and headed back to work early. It was a portent of things to come as we had a pretty bad thunderstorm with some very hard rain later in the afternoon.