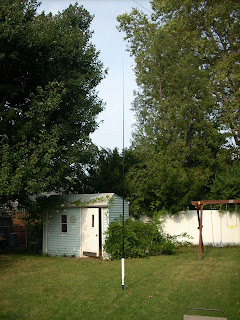 I stopped by Lowe's on the way home from dropping my two children off at a birthday party; and I picked up a piece of PVC that's 2 inches in diameter by 2 feet long.

I removed the 1.5 inch diameter piece that I previously had attached to the angle iron and replaced it with the larger. Viola' !!!!

As you can (hopefully) see from the photo to the left, the Black Widow crappie pole slides right into the PVC and is held nicely upright.

This should now allow me to make more frequent use of my NorCal doublet when I set up QRP portable. The PVC cost me all of two bucks and change; and the angle iron was about the same. So for under $5, I have a neat holder for my Black Widow crappie pole, which I purchased from Cabela's a few years ago for $19.99. I went on their Website this past week and they still stock them; but I don't remember what the cost is - I think they're still about $20.

So, if I have a couple of trees on either side, I can have a nice flat top dipole - if not, I'll carry along two tent pegs and set up as an Inverted Vee.

BTW, it was very hot and muggy here in NJ today. About 85 degrees with lots of humidity. Real August weather, which up until now has been abnormally cool and dry. From the extended forecast, it's looking like September weather in August and August weather in September!