Something is not right

I was listening to a conversation on 2 Meters tonight on the way home from work. I heard something, that were I drinking coffee, would have caused me to do a spittake. That's the term for the comedic tool where you see someone who is surprised spew out whatever beverage they happen to be drinking at the time.

A Ham (who will remain nameless) was describing how much fun he's been having with his Yaesu FT-817 and how he loves making 5 Watt contacts ...... yadda, yadda, yadda. So far, so good.

The he went on the describe how he hasn't used the radio much lately because the current sunspot lull is making QRP contacts so hard. OK, I don't really agree with that assessment; but I can see how for someone else it might have some merit.

THEN came the kicker ..... he continued on to say, and I quote "It's hard enough making QSOs with 600 Watts from the home station". 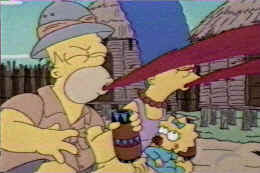 I was about to jump in and question that; but he had arrived at his destination and shut his mobile station down.