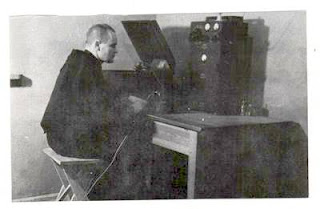 In the calendar of the Catholic Church, August 14th is the day that the Church honors and remembers the life of Saint Maximilian Kolbe, Priest and Martyr.

The following short biography appeared on the Catholic Exchange Website:

As a child, Maximilian Kolbe (1894-1941) had a deep devotion to Our Lady. On one occasion he had a vision in which Mary offered him either a white garment, symbolizing purity, or a red one, symbolizing martyrdom. “I choose both,” the boy replied. His heart was transfixed by Our Lady. Later he prayed that when he died, he would be blessed with departing life on a Feast Day of the Blessed Mother.

Maximilian entered the Franciscan Order at age thirteen, and was ordained a priest in 1918. After serving some years as a humble parish priest, Fr. Kolbe was named director of one of the largest Catholic publishing firms in Poland.

To better “win the world for the Immaculata,” St. Maximilian’s friars utilized the most modern printing and administrative techniques. This enabled them to publish countless catechetical and devotional tracts, a daily newspaper with a circulation of 230,000, and a monthly magazine with a circulation of over one million. Maximilian started a shortwave radio station and planned to build a motion picture studio — he was a true “Apostle of the Mass Media.”

Following the German conquest of Poland in 1939, he (like many priests) was arrested, but soon released. Maximilian devoted himself to helping Jewish refugees. When the Nazis discovered this, he was again arrested and sent to Auschwitz in 1941. There he tried to set an example of faith and hope for the other prisoners.

When a prisoner escaped from camp, the Germans chose ten men at random and sentenced them to death by starvation; one of them was a Polish sergeant, Franciszek Gajowniczek, whom Kolbe had befriended. Fr. Kolbe left his place in the ranks and asked permission from the commandant to take Gajowniczek’s place. The shocked German officer agreed, and Kolbe and nine others were taken away to die. Maximilian helped the others prepare for death. He was the last to succumb, dying on August 14, the eve of the Assumption.

In addition to his priesthood, Father Kolbe was also an Amateur Radio operator. His callsign was SP3RN and the picture above shows him at his station. He is credited with keeping many of the world's Amateur Radio operators informed about the atrocities committed by the Nazis prior to the outbreak of World War II.

Because of his exemplary life and because of his devotion to God and to his fellow man, Fr. Kolbe was canonized as a Saint of the Catholic Church by Pope John Paul II in October of 1982.