I did manage to get back on the air for a little today. 20 Meters was the good band during the day today. All my time was spent on 80, 40 and 20 Meters between yesterday and today. I saw reports on QRP-L that Ron WB3AAL was going to try 15 Meters today; but I think his efforts on that band proved pretty much fruitless..

I ended up with 43 QSOs in my willy-nilly approach to getting on the air. I probably spent less than 4 hours total time behind the radio - which is fine by me; as that's all I was able to manage.

It was good to hear old friends on the air and have the exchange start with a "Hi Larry". I love when that happens! It was also good to hear some KI and KE prefixes; as that's an indication that some recent licensees are getting into CW and QRP. It was also nice to hear QRP-ARCI membership numbers that were in the 13,000 series.

In the next few days I will submit a log to Jeff VA3JFF. Not sure what my score is; but I'm sure I'll place somewhere in the bottom 3rd of the pack. And again, that's okay, as the idea of these events is to have fun; and in that regard, we can say, "Mission Accomplished". 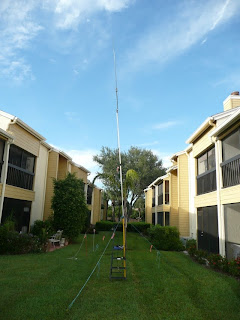 K4UPG's Buddistick
As usual, the equipment here was my K2 to the G5RV. And one of my last QSOs on 20 Meters this afternoon was with Kelly K4UPG, whose blog is featured on the blogroll. I'm not exactly sure what his set up was; but if it was the same as yesterday, he was using his Buddistick and Sierra. That was a thrill because because he joins K3WWP, K3NG, N8ZYA, KB6NU and AE5X as Hams on my blogroll that I have actually worked.