I guess that a few folks who went places to operate for the ARRL DX Contest have stayed on a few days at their respective "vacation" spots.  On the air today, I was hearing a lot of the call signs that I heard in the Caribbean from over the weekend.  You would think that having completed major DX contest that these folks would be kicking back on the beach, soaking up the sun and sipping a cool libation from a coconut shell (complete with little umbrella, of course!).

I worked a couple of them; but the station that intrigued me the most was GM100RSGB, the Centennial Special Event Station for the RSGB from Scotland. At 1914 UTC, they were loud into New Jersey on 20 Meters, and I was able to work them with 5 Watts very easily. According to QRZ.com, this is what their QSL looks like: 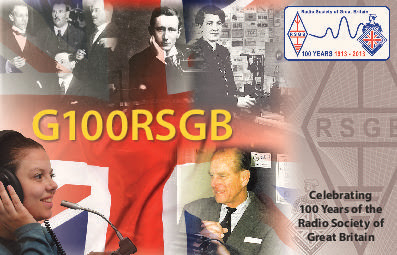 The Centennial for the ARRL occurs next year.  I wonder if the League will petition the FCC for a special anniversary call sign for W1AW for next year?