I was twiddling around the 30 Meter band and worked a couple DX stations - OM3SX and E71A and kept tuning, listening to hear what I could hear.  Then I heard K5T calling CQ with not many takers at all.  K5T is activating Timbalier Island IOTA NA-119, which is off the coast of Louisiana. 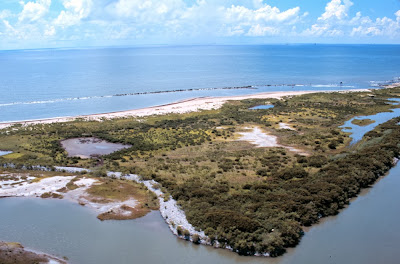 I worked them quite easily, and then they continued to call CQ, again - not many takers. Sounding kind of lonely, in fact.

I know what it's like to organize a special event station. I also have some experience helping to get a small expedition on the air, having helped the now defunct Old Bridge Radio Association with an expedition to Liberty Island in New York Harbor back in the very early '80s, when I was a relatively new General. Knowing all the planning and preparation it takes to pull something like a K5T IOTA expedition off, I couldn't let them just call CQ forlornly all night long.

So I spotted them on the TelNet Cluster.

They went from calling CQ and working a few stations via simplex to total pandemonium and working split in the space of about 5 minutes.

Geez, I sure hope they didn't mind going from 0 to 60 mph in ten seconds! (Somehow, I don't think they did)

Email ThisBlogThis!Share to TwitterShare to FacebookShare to Pinterest
Labels: DXpedtions