Another Christmas Story - Part I 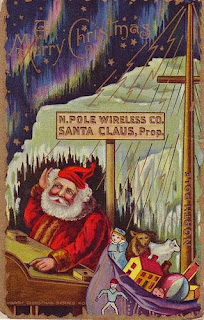 Jason Bolton had to resort to hollering up to his son, who was up in his room.

"In a sec, Dad!  Just trying to work this 9L in Sierra Leone. The pileup is way humongous!"

His Dad answered, "Turn the radio off for now, son. We have to get going, now!  We promised we'd be at the soup kitchen in twenty minutes."

One Sunday each month, Jason and Davy had been volunteering at a community soup kitchen at St. Nicholas parish in Springdale, which was the next town over from them.  Davy was going to receive his Confirmation the following Spring, and part of his preparation was community service.  Twenty hours of service between the end of October and the beginning of next May were mandatory.  Jason didn't mind, he actually enjoyed it and he felt it was good for his son to help tend to the needs of those who were less fortunate than they were.  Davy didn't mind either, except that it did eat into the time he spent on his radio.

Amateur Radio was David Bolton's hobby - no, it was more like his passion. Ever since their neighbor, George Mason N2EBA had tutored Davy in the ways of Amateur Radio, he had taken to the art of radio like a fish takes to water.  And it turned out that Davy, call sign KD2PGA, was a natural.  Not only was he a superb operator at the tender age of 13, but he had also developed a keen sense of the electronics and the technology behind his hobby.  He and his best buddy, Jim Stapleton KD2PGB had been George Mason's prized students, and their learning did not stop when they earned their "tickets".  They both showed signs of having "The Knack" and both looked forward to possible future careers related to electronics and technology.

Davy came bounding down the stairs, "All ready to go, Dad!", he exclaimed.

"I don't think so, Bud. Aren't you forgetting something?"

He looked at his father with a confused look on his face. "Forgetting something?  I don't think so, I have my 2 meter handheld and the food we're serving is already there, no?"

"Look down, Davy - look down", his father chided.

"Yes son, it's a bit too cold to be heading out on a December Sunday in your stocking feet.  Sometimes, I think you leave a little bit of your head inside that bedroom shack of yours!", his father responded.

Davy's shack was his pride and joy. He had been gifted with an Elecraft KX3 by his Dad and Mom last year at Christmas.  Davy's Mom had passed away earlier that year, after a long fight with cancer, but she knew how much Davy had wanted that radio. And even though she knew how grave her condition was, and that she wouldn't be with her son for Christmas, she had insisted that Jason purchase the radio early.  She had wanted her "last gift" to him to be as memorable as she could make it.  In addition to the commercial gear he owned, Davy had built up, or homebrewed, quite the set of station accessories, all with the help of George Mason, of course.  George and Jeannie Mason, the Bolton's next door neighbors had become Davy's adopted grandparents.  George and Jeannie looked after Jason, too.  They knew that raising a teenaged son alone wasn't the easiest job in the world.

It seemed that when Davy wasn't in school, he was on the radio.  He had completed his DXCC and Worked All States awards, and was going on to higher ground.  Even though he was strictly a QRP operator, low power didn't seem to be a barrier to Davy.  Other Hams might consider KD2PGA to be just a little fish in the ocean of Amateur Radio operators, but he began chasing DX countries with the appetite and attitude of a shark.  His goal was to some day make DXCC Honor Roll using QRP power levels.  The fact that there were only one or two individuals to have done this before him did not deter him in the least.

All this was being done on the understanding that grades didn't suffer.  Jason Bolton made it clear to his son that schoolwork came first and that there would be no exceptions.  As it turned out, he needn't have worried. If anything, the discipline of learning a technical hobby was only helping school matters. Davy was proving himself to be a capable student and was keeping his grades at a high level.  He seemed to be as at home behind a history or math text as he was behind his radio gear.

Davy ran and put his shoes on, locked the front door and followed his Dad out to the car.  They were going to pick up Jimmy and then proceed on to the soup kitchen.

"You've worked out everything with Mr. Mason, right?" his father asked?

Davy and George had gotten permission from their local radio/repeater club, the Twin County Amateur Radio Club, to occupy the machine that afternoon.  All the club members agreed to let Davy and George allow the soup kitchen kids to talk with Santa at the North Pole that afternoon.  Davy and Jimmy were bringing their handhelds and George would be operating from home.  Jeannie Mason, George's wife, even agreed to take on the role of Mrs. Claus for the afternoon, just in case there were kids that were too shy to talk to Santa.  She has a warm and friendly voice and a way about her that had succeeded in pulling children out of their shells in years past.