"Anytime, Jim, always glad to have you along." Davy's dad replied.  "How's your Dad doing?"

"He's doing fine, Mr. Bolton.  His new job has him traveling a lot, but he's doing so well that Mom is able to stay home and take care of the house and all.  So thanks for giving me a lift to the soup kitchen while he's away."

"No problem, Jim. You know you're part of our family, too.  You're welcome to hitch a ride with us anytime".

Soon the three of them were there.  They were warmly greeted by Donna Pescarelli and her daughter Maria.  Donna, who oversaw the running of the soup kitchen, had been a good friend of Davy's Mom, Abby.  She new Jason and Davy well, and was glad to see them and Jimmy.  In fact, Davy, Jimmy and Maria were all classmates at Christ the King School.

After signing in on the Volunteer Roster, they immediately went to work.  After securing their coats and radios in a locked closet, Jimmy and Davy began setting up tables in the church basement that served as the soup kitchen.  While they were busy doing that, Jason got busy transferring trays of food from the refrigerators in the kitchen to the oven to warm up.  Today the volunteers would be serving chicken, mashed potatoes, and mixed vegetables to all the incoming customers.  There would be coffee for the adults and lemonade for the children. Also, there would be hot chocolate and dessert to anyone who wanted it. It would be a very good and warm meal on a cold and blustery December Sunday for some folks who had to deal with not having much of anything. Donna had thought to provide enough food so that the people could take home containers full of "seconds" if they wanted to. 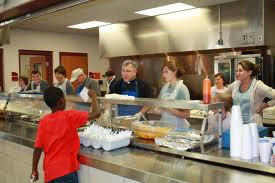 The dinner went smoothly. People filed in, signed in, and were seated. After receiving a fresh fruit cup, they were treated to a roasted chicken dinner. Afterward,  they were given dessert.  Normally the people would begin to leave after that, but at 4:00 PM, Davy and Jimmy announced for everyone to sit back and relax.  The duo got out their hand held radios and "explained" how they were going to use their Ham radios to contact Santa at the North Pole.  The little kids in the crowd were excited, scared and awed all at the same time. The chance to talk to Santa one-on-one was something they didn't want to miss.  Most of the parents were leery, knowing they didn't have enough to fulfill their children's wishes. But Donna Pescarelli had quietly assured them all, that come the special dinner being held on Christmas Eve, each child would receive a very nice and special gift from their list.  Jimmy turned on his HT and started things off, while Davy got the kids who wanted to talk to Santa, in an orderly line.  There were about a couple dozen in all.

"Santa N2EBA, Santa N2EBA, this is Jim Stapleton KD2PGB calling from Springdale. Do you copy? Over".

George and Davy and Jimmy had this all worked out.  In addition to turning off the courtesy beep of the repeater, George has a recording of a shortwave heterodyne playing softly in the background, so it would sound more "realistic" like when a shortwave radio was being tuned in an old time movie. 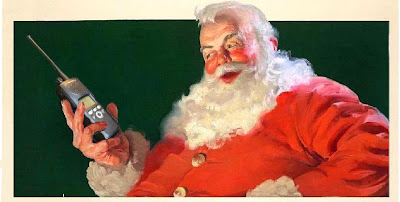 "KD2PGB, KD2PGB, this is Santa N2EBA calling you from the North Pole!  Hello Jimmy and Ho, Ho, Ho!  Is everybody getting ready for Christmas in Springdale?"

When the little ones heard Santa, their eyes went wide as saucers.  One of the little boys in the line was heard to say that since this was radio, this just had to be the real Santa, and "not like those fake ones at the mall!".

The first girl in line was named Karen. So Jimmy started with her. "Karen, do you want to talk to Santa?" he asked.  She appeared a little frightened by it all, but nodded her head "yes", so Jimmy really got into it.

"Santa, the first little girl that wants to talk to you is Karen" Jimmy then told Karen that he would hold the radio and would push the button and indicated to her where to speak.

"Ho, Ho, Ho" bellowed out George, in his best Santa imitation. "So Karen, have you been a good little girl this year?  What would you like Santa to bring you for Christmas?"

Karen had no problems with her answer,"Yes, Santa, I've been a very good girl this year. I listen to my Mommy and I try not to argue too much with my big sister. I would like a Barbie doll and a telescope for Christmas this year, pretty please?"

Santa answered, "Well Karen, I'm glad that you've been a good girl. I'll do my best to get those to you under the tree for Christmas".

Little Karen couldn't contain herself, but her Mom was obviously worried.  She went up to Donna and told her that things were so tight, that she doubted they would have a Christmas tree at home this year, let alone presents.  Donna put her at ease.  "You just make sure to come back here for dinner on Christmas Eve, OK?  Do you see that man over there?" Donna had pointed at Jason.  "He's taking note of what all the kids tell Santa that they want. We're going to do our best to make sure that at least one thing that they ask for will be here waiting for them".  Karen's Mom turned to leave with tears in her eyes. "God bless you folks" she said, 'Maybe we'll have a nice Christmas after all".