And here I thought it was me!

To say it is a beautiful day in New Jersey today is in understatement.  The sun is shining, and the temperatures are in the upper 60s (20C).  The breeze (if there is any) is so gentle that you don't even notice it.  So I decided that after grocery shopping, but before other chores, that I would sneak off to the park and try out the EARCHI antenna.  I built the 9:1 UNUN late last Autumn and didn't get a chance to try it out.

The antenna line launcher worked perfectly, once again.  First shot, I cleared a 50 foot tree with ease. The end fed EARCHI was up in record time.  I used a 33 foot piece of wire attached to the UNUN, and ran a 20 foot piece of coax from the UNUN to the KX3.  My results with tuning it via the KX3's autotuner were so-so.  The KX3 loved the antenna on 30, 20, 18 and 12 Meters. On 40, 15 and 10 Meters, I got a decent match, but the KX3's tuner clacked around noticeably longer finding a match on these bands.  I think I am going to have to experiment with different radiator lengths to see what ends up working best as an "all around" antenna length.

But even with decent matches, the bands seemed dead!  I did end up working W1AW/KP4 on 20 Meters, but other than them, I did not hear much.  I hear much more activity during the workweek from the Jeep than I heard today. Naturally, the first thing the Ham suspects is that it's the antenna - especially when it's a new one. Actually, my first reaction was that I screwed up something when I built the UNUN. I came home after only a short time out, a bit dejected.

Then when I got home, I got on the computer to order some wire and rope from The Wireman.  For the heck of it, I also decided to check out Facebook.  A lot of my Ham friends had posted about how lousy the band conditions are today. In fact, one commented that he went outside to make sure his antennas were still in the air! 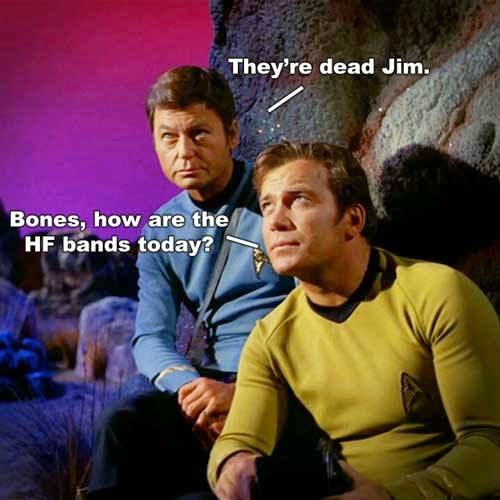 So it ends up that today was not the day to base a critical performance review on,  I will have to wait for another weekend with decent weather and better band conditions for another test. In the meantime, I will also browse the Internet to see if I can garner more information on optimal radiator lengths for use with a 9:1 UNUN.