Disappointingly, there was not a lot of activity last night in the QRP ARCI Hoot Owl Sprint.  My guess would be that between the CQ WWPX Contest and Holiday weekend BBQs and other activities, that most folks were probably too pooped to pop.

The last 1/2 hour, from 0230 to 0300 UTC was just me calling CW with no takers. That's when I decided to pack it in for the night. The KX3 was plugging away calling CQ and I started nodding off a little bit. I'm sure if there was more activity, I would have stayed on until the allotted time was up, which would have been local Midnight (0400 UTC). But the rig automatically calling CQ over and over is kind of like driving down a long highway in the rain with the windshield wipers on. The constant rhythm of CQ with no breaks can kind of lull yout to sleep.

According to Reverse Beacon Network, there is how I was being heard last night. 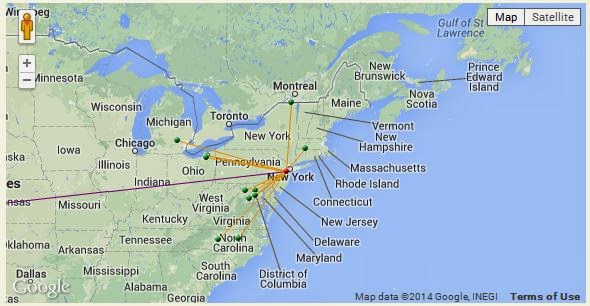 I spent just about all of my time on 40 Meters.  I did make one QSO on 80 Meters and three on 20 Meters, featuring the one with LZ2RS.  Other than that, everyone seemed to be concentrating on 40 Meters in the 7.030 MHz neighborhood. As far as antennas go, I was using mostly my 88' EDZ on 40 meters and for my very brief foray into 80 Meters. On 20 Meters, I used the Butternut HF9V.