That's all I can say - wow!  A magnificent time was had at the first Field Day for the South Plainfield Radio Club.  I posted the following to QRP-L, and I'll insert some other thoughts at the end.

The South Plainfield Amateur Radio Club operated Field Day in Spring Lake Park in South Plainfield, NJ. We used Club call NJ2SP, and ran as 2A (Battery). The "2A" were two Elecraft KX3s. The CW station ran to a EARCHI antenna (53 foot radiator, 9:1 UNUN, 25 foot length of coax). The elevated end of the EARCHI was about 30-35 foot up in a tree. The SSB station used a G5RV, about the same height between two trees. 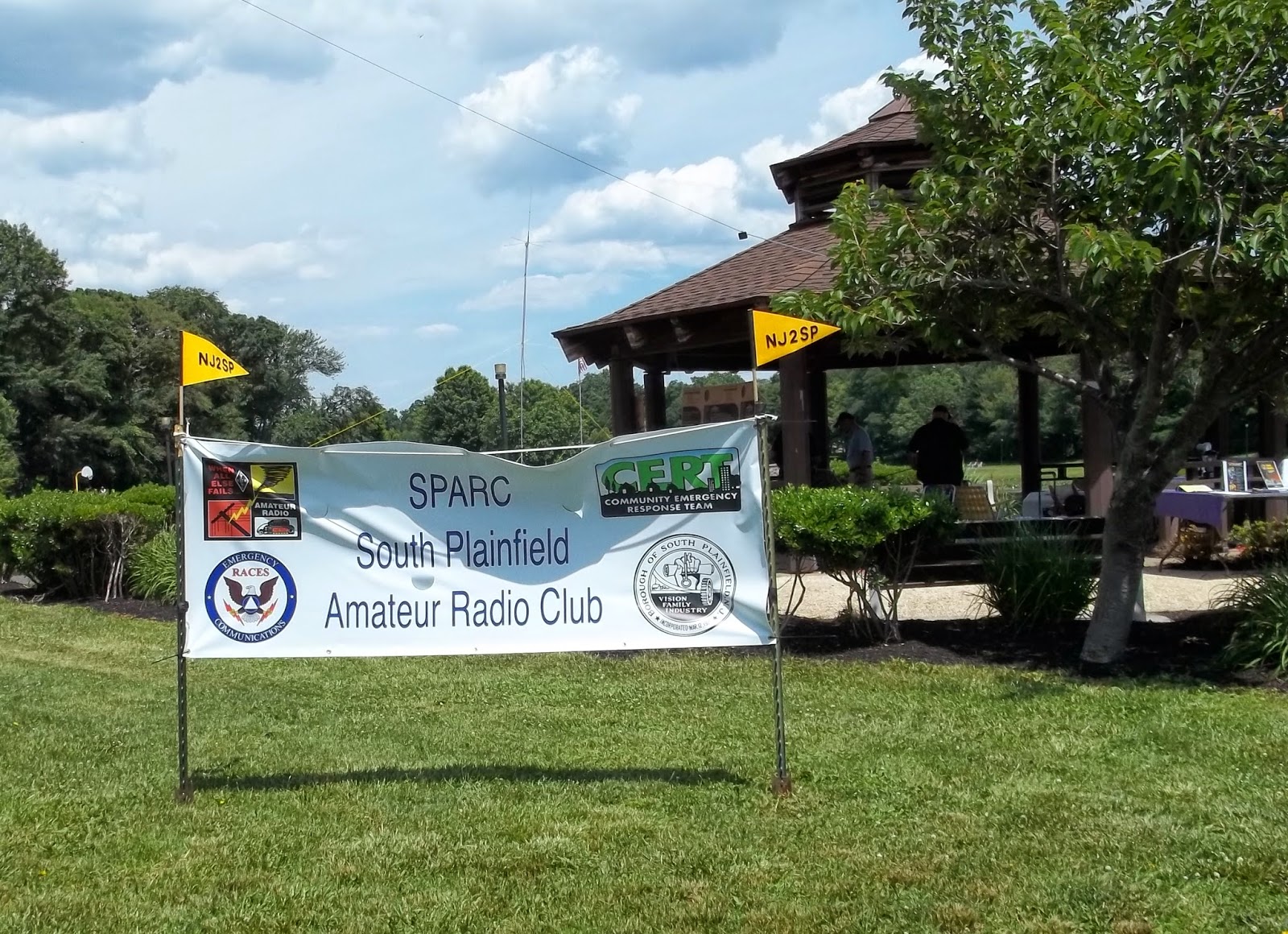 Our operating position behind our club banner.
And if you look closely (click on the picture for a bigger image) you can see the EARCHI antenna sloping upward and away towards the tree it was anchored in.

The EARCHI antenna was a resounding success. The KX3's internal tuner handled it exceedingly well on all bands. We made just a tad over 270 CW QSOs, with our best DX being Hawaii, Puerto Rico, the US Virgin Islands and the Cayman Islands. 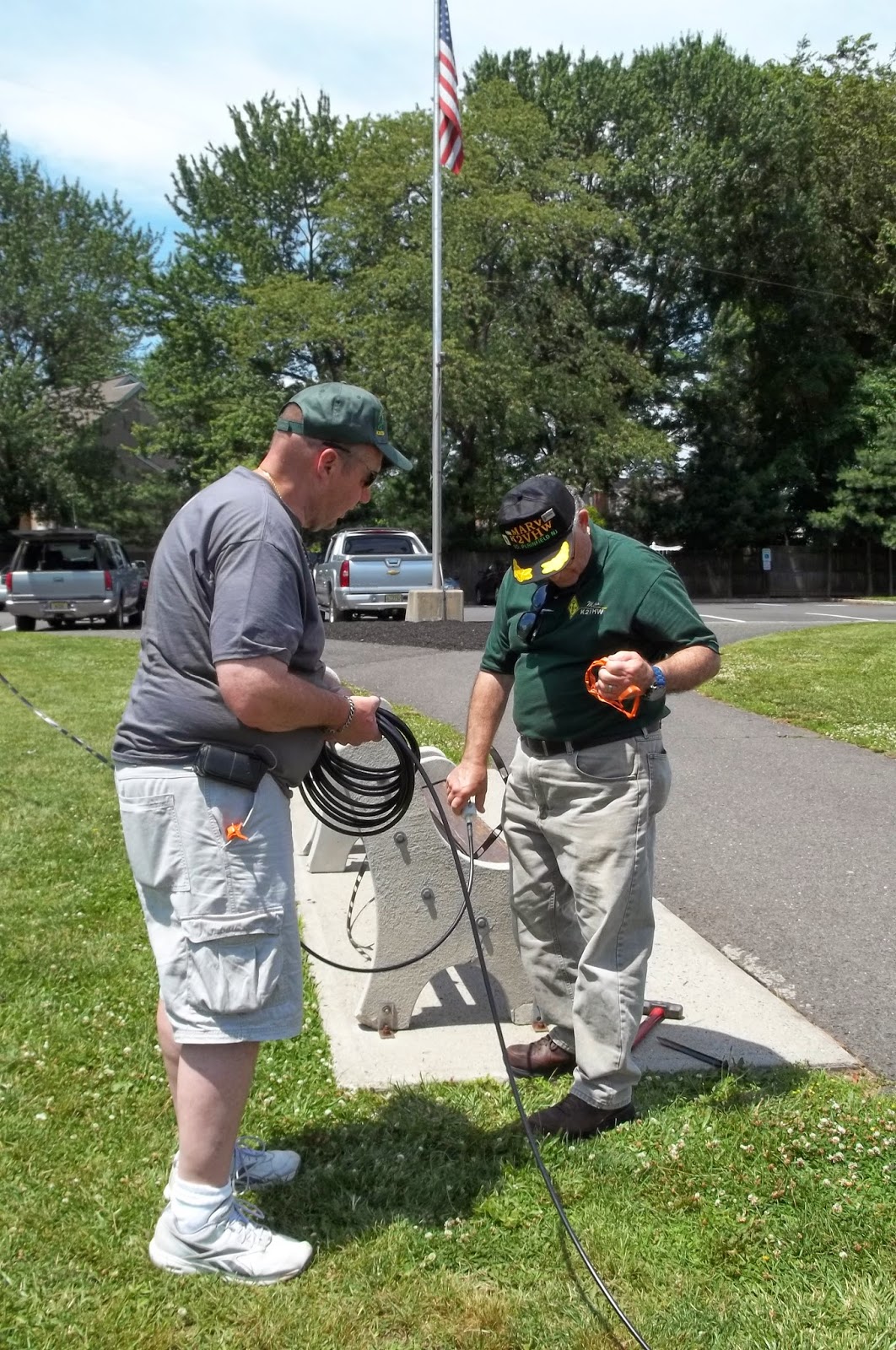 The G5RV worked exceeding well, also. The KX3 again tuned without a hiccup. The SSB team completed just over 100 SSB QSOs - these guys are all QRO ops and they were skeptical about completing even a single QRP SSB QSO. They ended up surprising themselves, and they ended up being quite amazed at what they were able to accomplish. Yes, it was not as easy as using 100W rigs, but even in keeping with the ARRL's 5 Watt limit for the battery category, they were quite pleased. 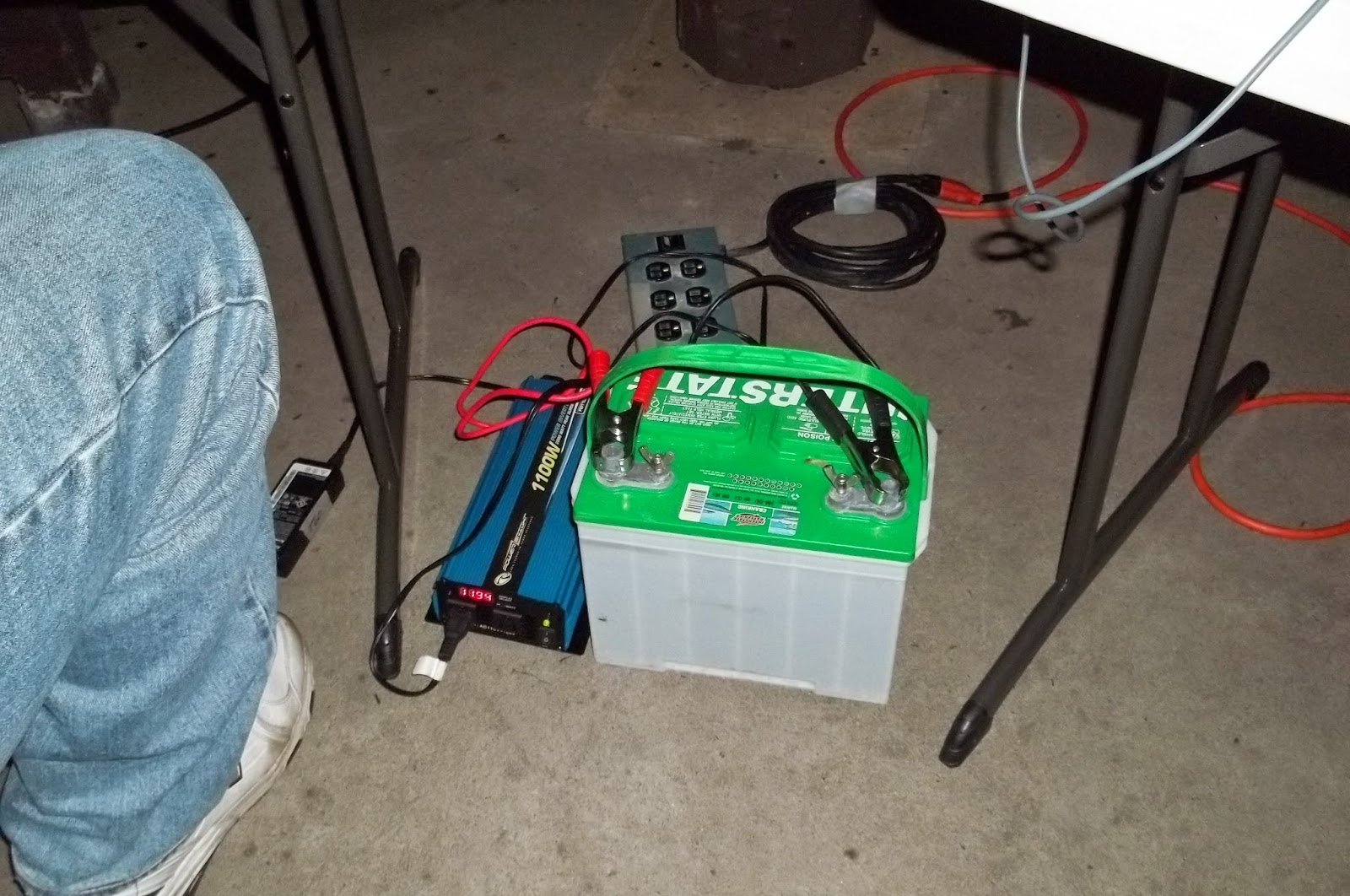 Power source for the laptops 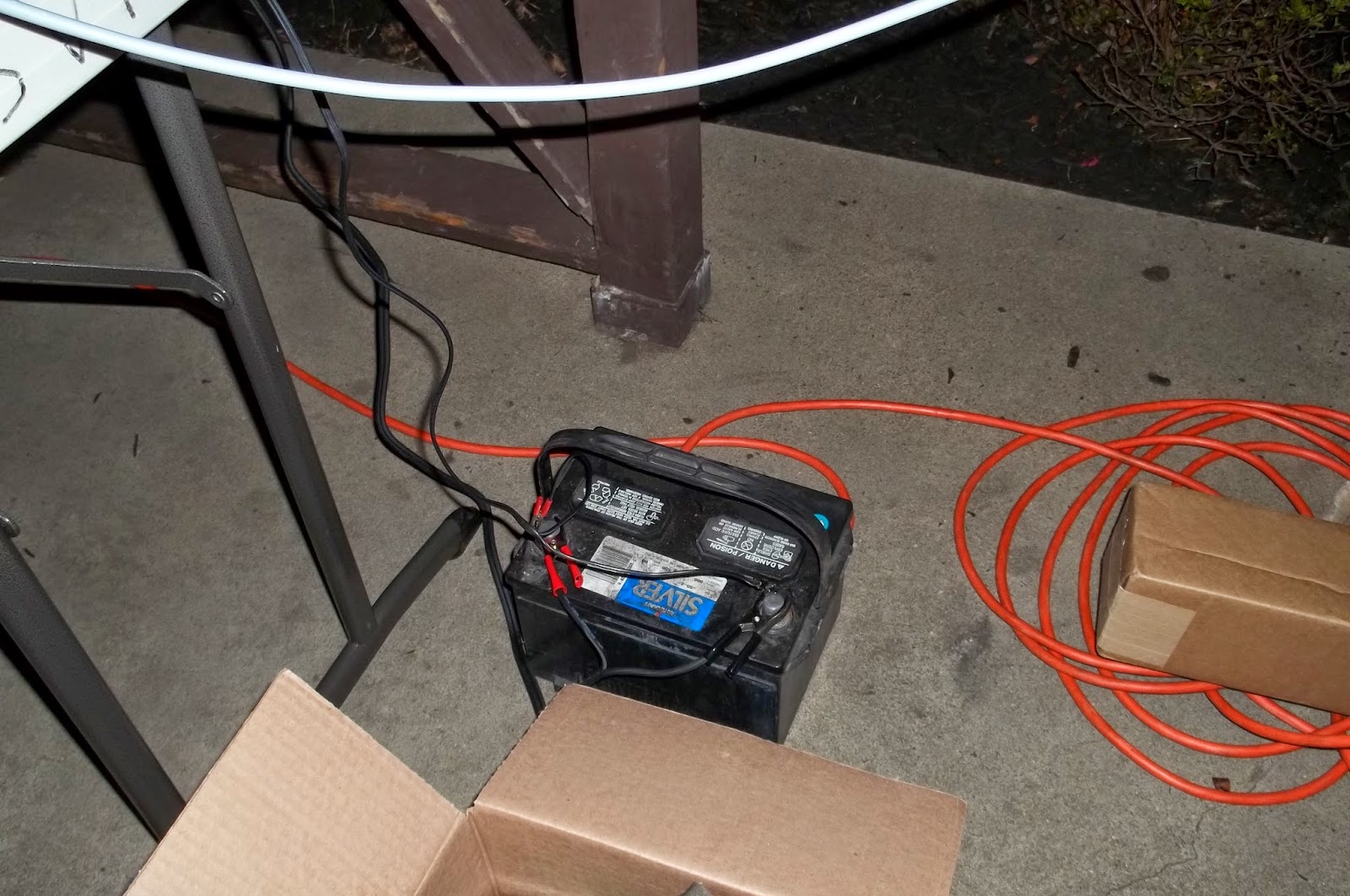 Power source for the CW station

We operated on solar charged batteries all weekend without a hitch. The energy hogs for the weekend were the two laptops that we used for logging. The Field Day rules state that since we were not using the laptops for rig control, we could have powered them from mains (which we did not have) or a generator (which we had, but didn't use). In keeping with our self imposed "severe emergency capability" theme in order to make this a drill as much as possible, we also powered them off a deep cycle battery using an inverter. We needed to switch the laptops over to a fresh battery somewhere in the mid morning hours, Sunday.

SPARC's first Field day was an outstanding and unqualified success, and I think we 'busted' the myth that Field Day has to be QRO to be fun.

The EARCHI worked great and way better than I dared hope for. With less exceptions than I can count on one hand, I was able to work everyone that I tried to.  Being on an energy budget because of the batteries and wanting them to last all weekend if possible, I didn't try calling CQ or running a frequency (it was S&P all weekend).  I will reserve that for FOBB and the Skeeter Hunt, which are only four hour events. I can afford to be a little "battery foolish" during those, and I expect the EARCHI to work just as well during those two events. 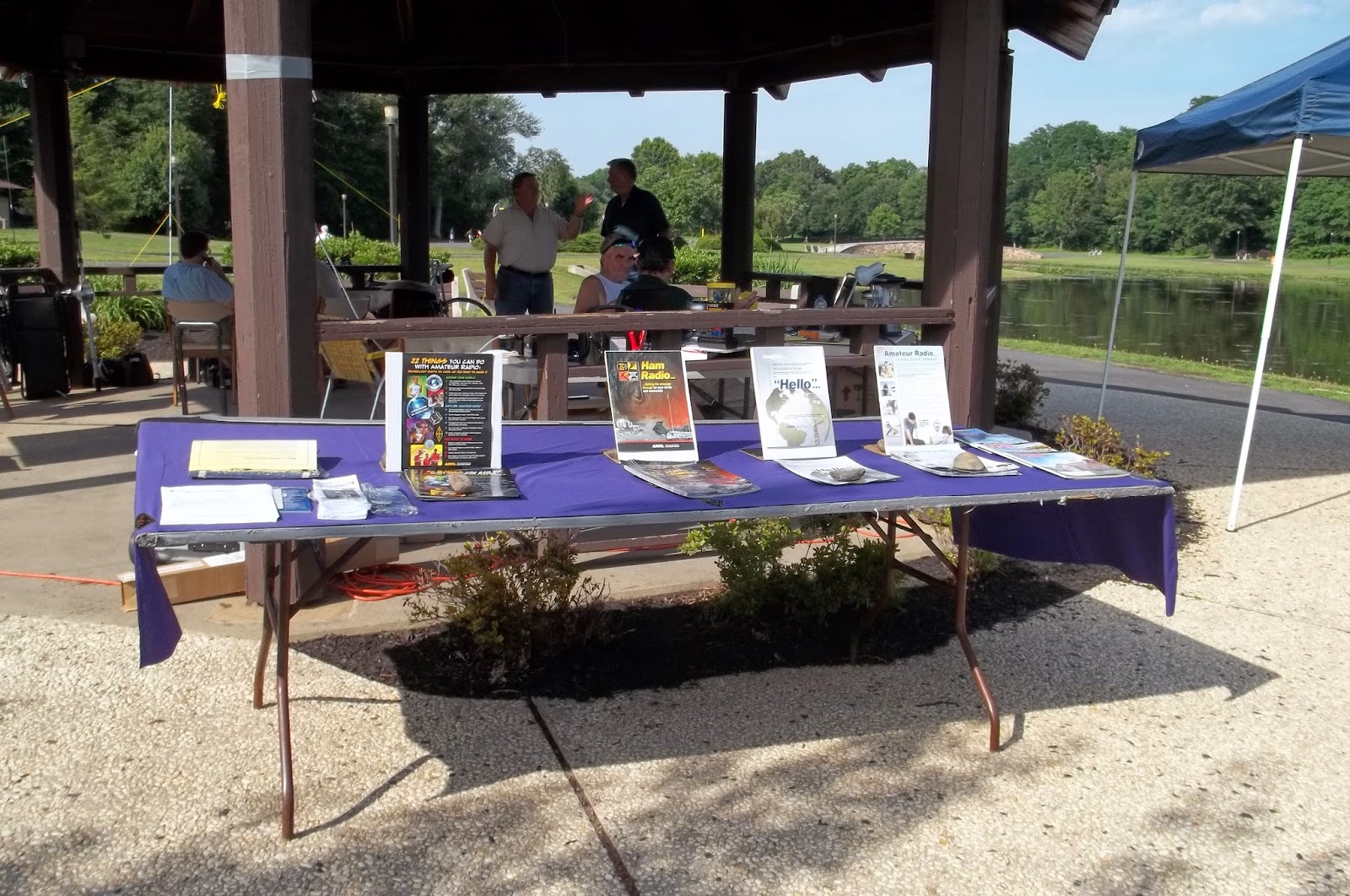 The other Godsend of the weekend? That Joplin ARC antenna launcher kit that I purchased and built up. We were able to place antenna lines pretty much exactly where we wanted with hardly any effort at all.  That thing is one of the greatest things since sliced bread! One or two of the guys were skeptical about being able to place an antenna line so easily and accurately with such little effort. The old saying is "That seeing is believing". They're believers now! 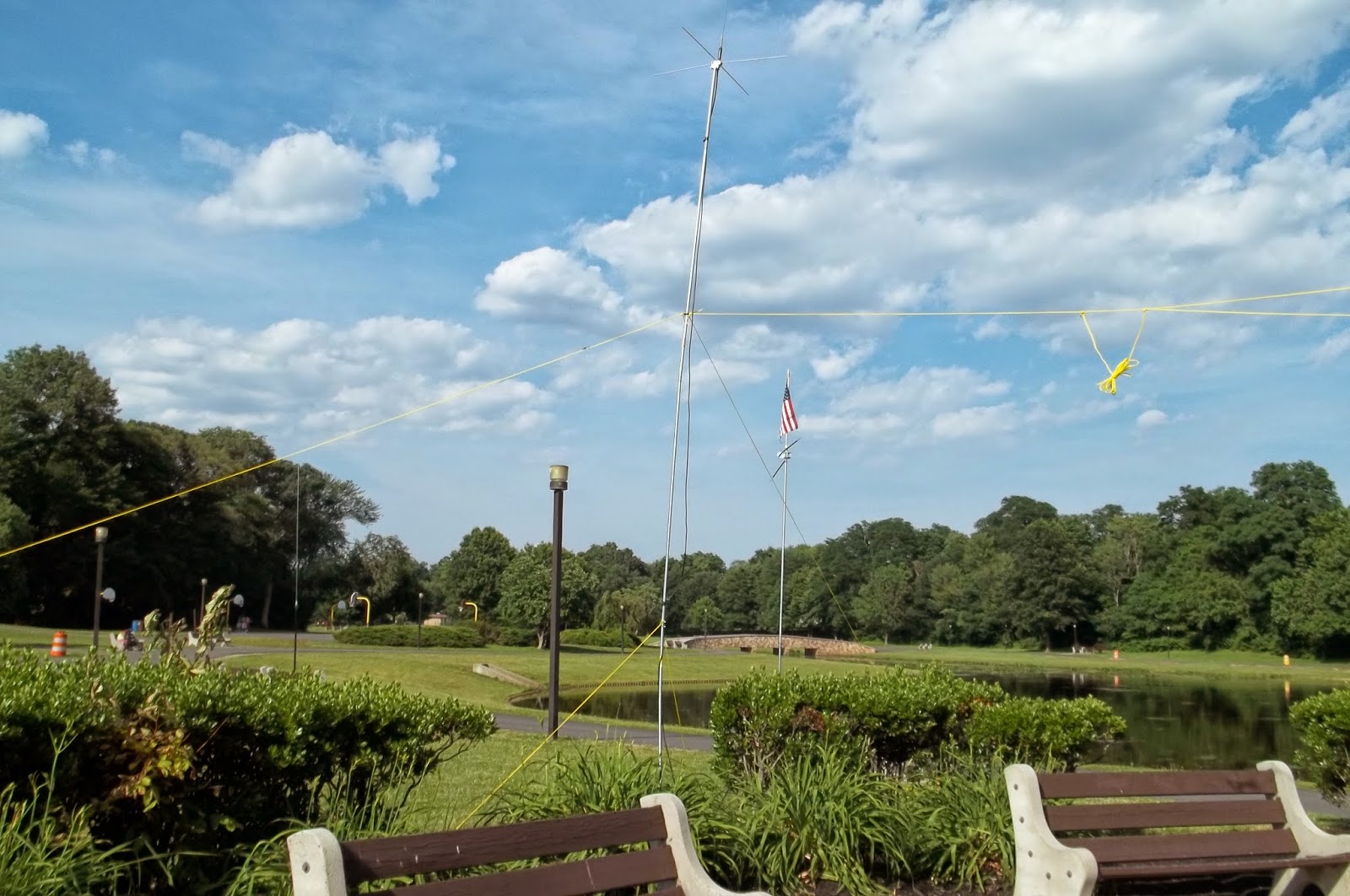 The VHF/UHF antennas for our GOTA station. 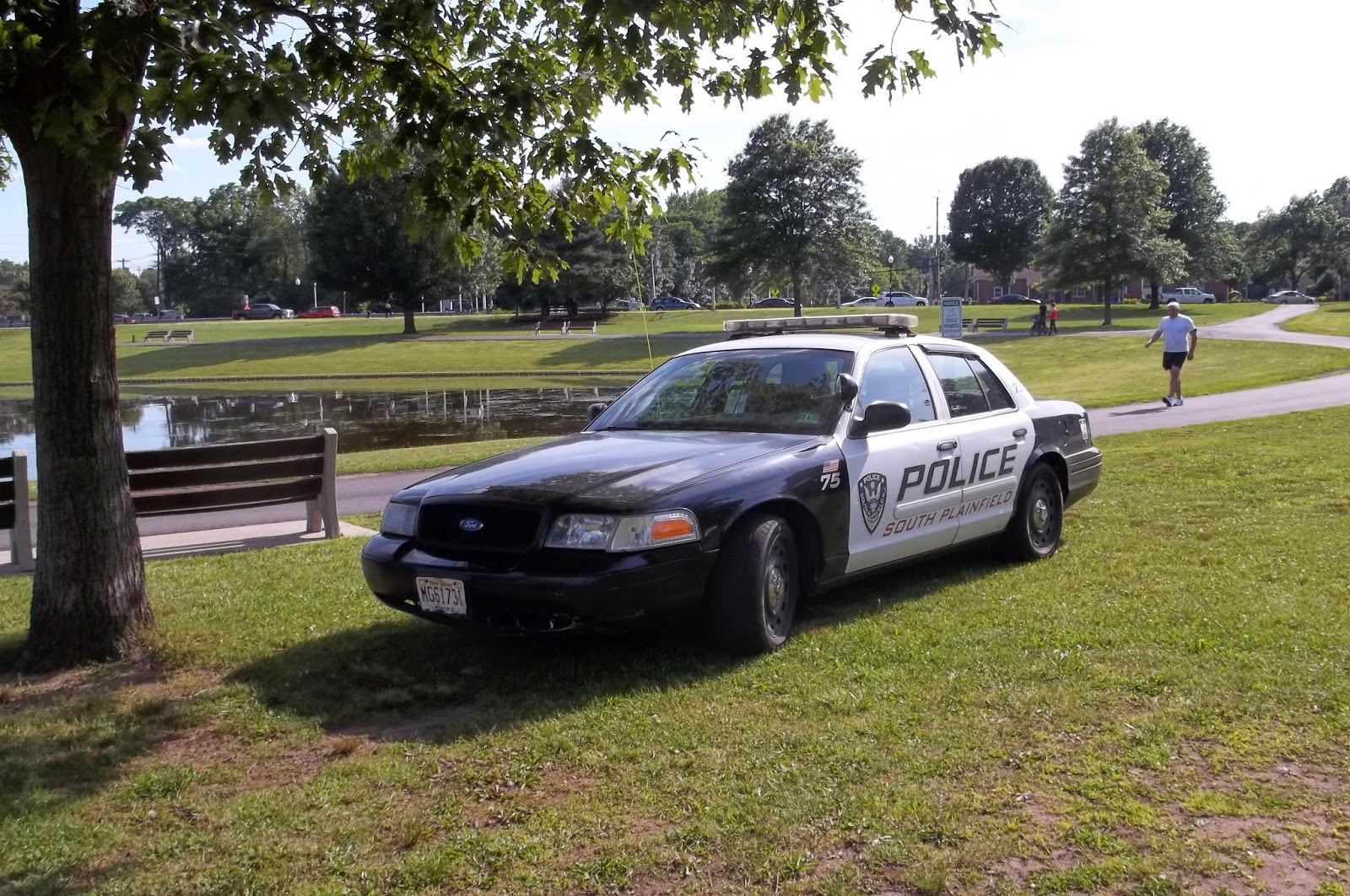 We had wonderful support from our Mayor, Town Council, Office of Emergency Management and our Police Department.  They even parked a car by our site for the overnight, to act as a deterrent against any potential mischief makers! 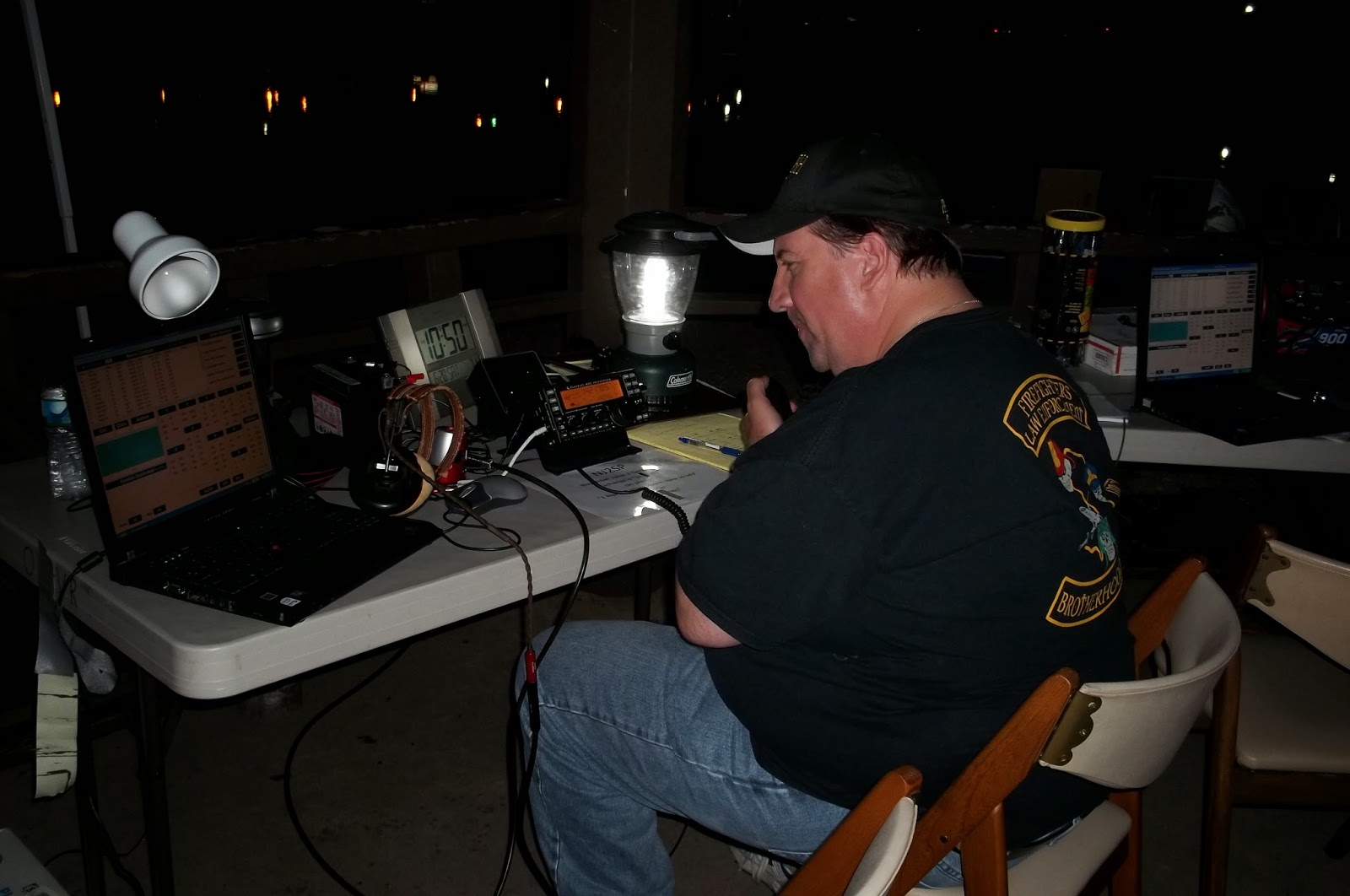 Tim AB2ZK making SSB QSOs in the dead of night. 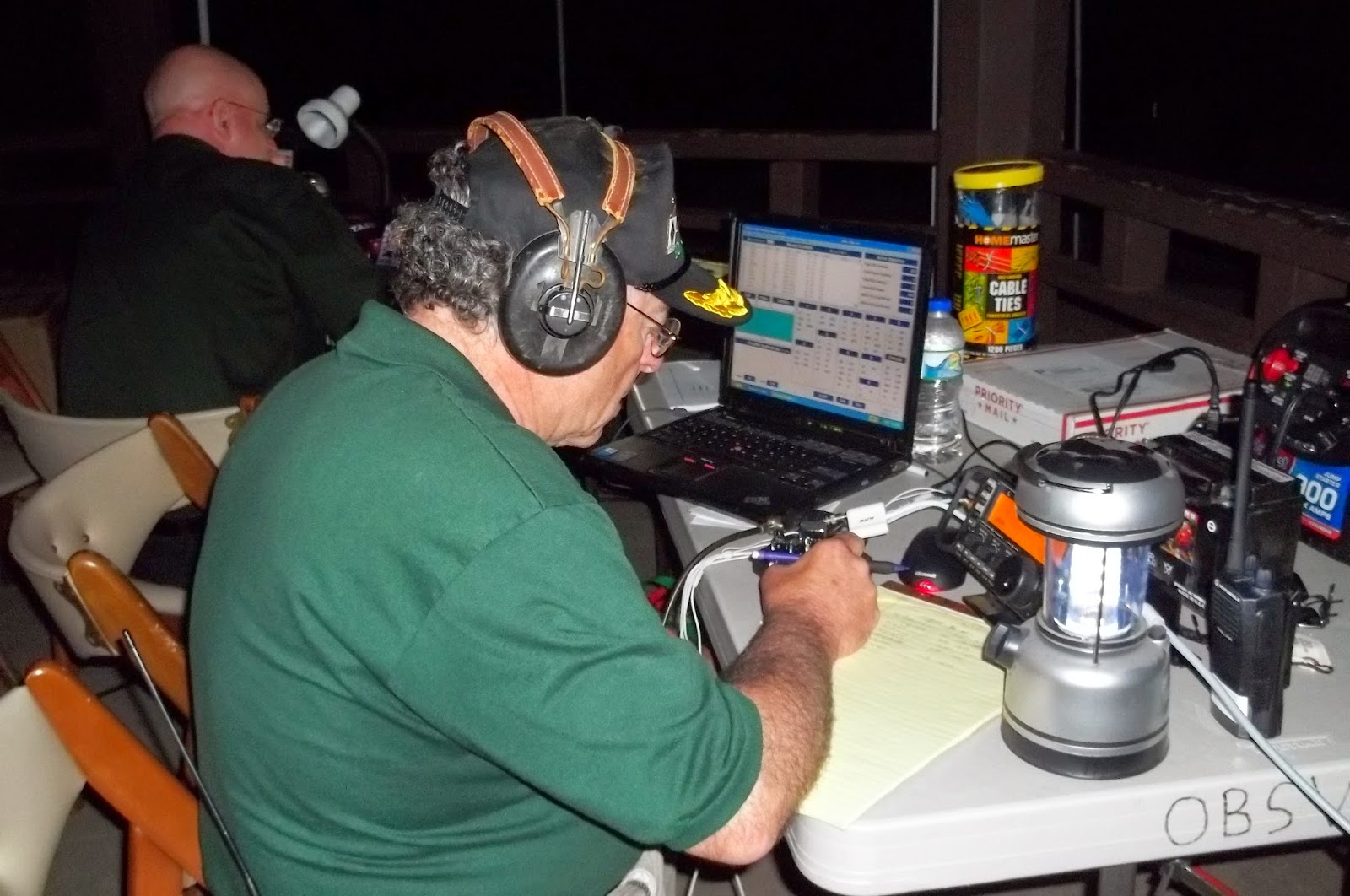 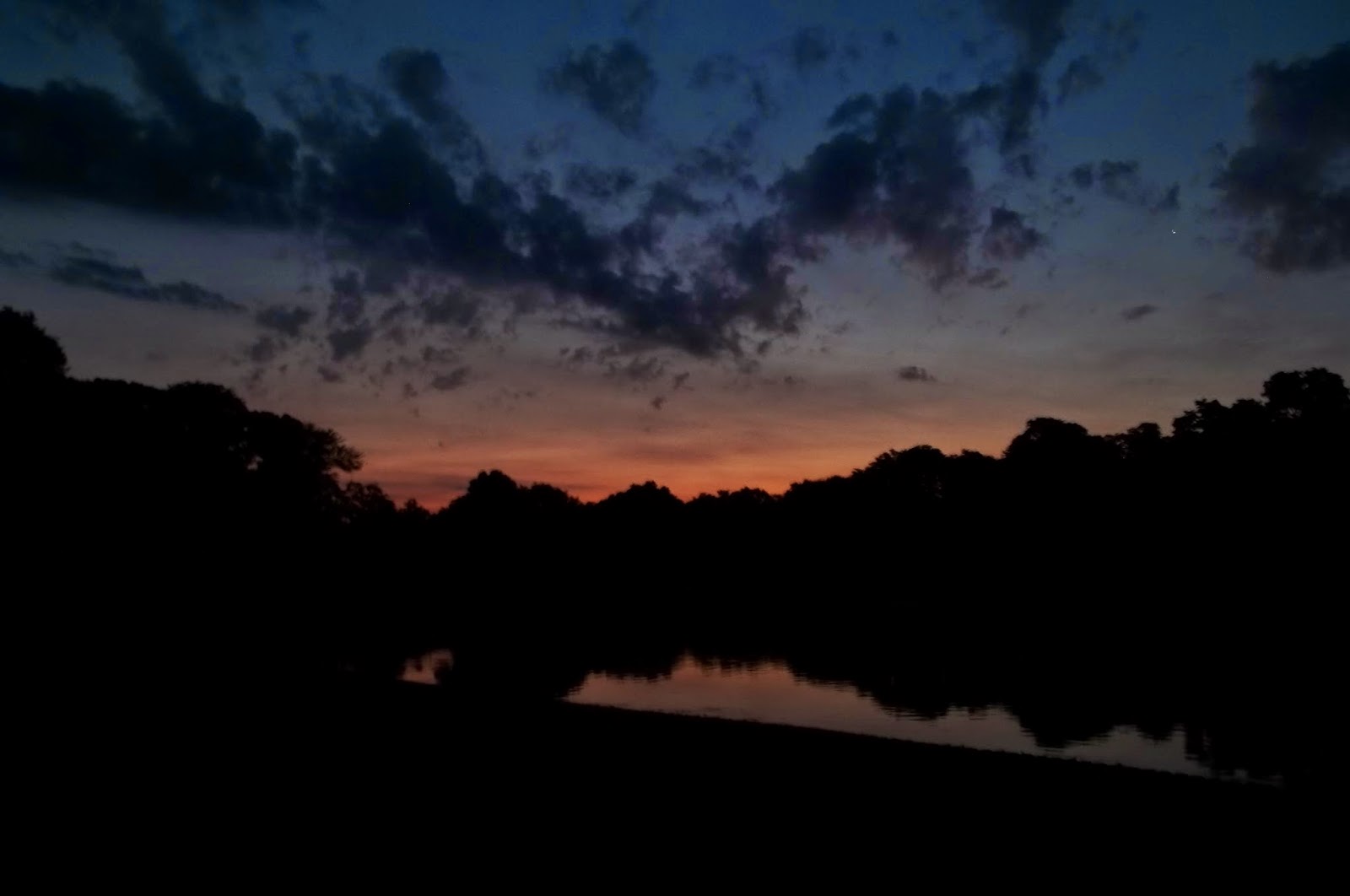 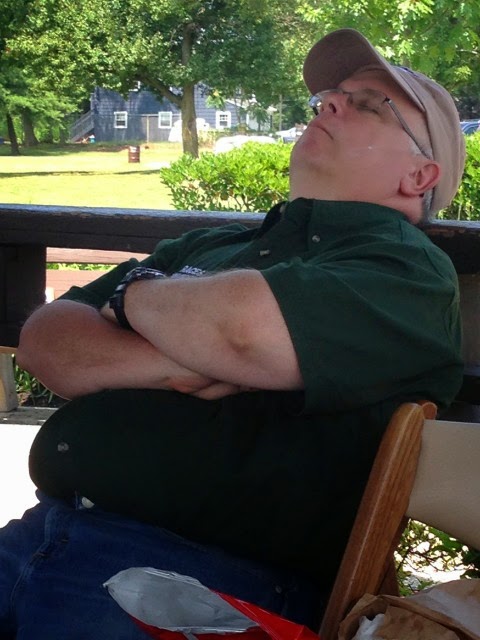 Field Day aftermath.
After being awake for 24+ hours, I fell asleep while waiting for the Mayor to show up late Sunday morning. I woke up in time for his visit, though!

Being in the park, we had a lot of curious people come by.  We answered any and all questions and we handed out quite a bit of ARRL printed material about Amateur Radio. An encouraging sign was that several parents came by and wanted more information for their tech minded offspring. 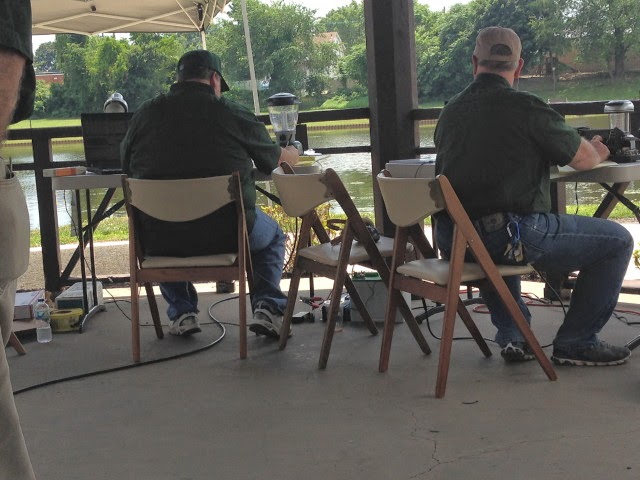 Squeezing out some last minute QSOs as Field Day draws to a close. Tim AB2ZK on phone, W2LJ on CW.

The moral of the story is that Field Day is fun!  It doesn't have to be elaborate to be a success. With two wire antennas and two QRP rigs anchored at 5 Watts, we had a blast.  Oh, and we made the local paper, too!  http://tinyurl.com/ls56z6u  Some of the details were not exactly reported accurately, but it was good exposure for Amateur Radio nonetheless!

In closing, I'll answer a question that was posed to me by a member of the visiting public, the way I wanted to answer it. A woman asked me if it was a bit extreme staying awake throughout the 24 hours of Field Day. Of course, I gave her the answer of "In the event of an emergency or a natural disaster, sleep may very well be a luxury, ......." Yadda, yadda, yadda.

What I wanted to say was any of the following:

Or I could've gotten all Clint Eastwood and said:
3) Ma'am? I'll sleep when I'm dead!

One final, last added mention.  Last year, Marv K2VHW introduced me to Deep Woods Off moist towelettes.  They are a must for the Field Day Go Package. They worked extremely well, and I was not bothered by a single "Skeeter" (pesky little fellows, I should have had them pound brass!) all night long.