I didn't have as much success as Jim W1PID and Tim W3ATB had during their outing today, but I had a tiny bit of success.  17 Meters seemed to be open with not a bunch of activity. I did hear a few European and Russian stations. Instead of hunting and pecking, I decided to call CQ - you know, what all "the experts" say that QRPers should never do. 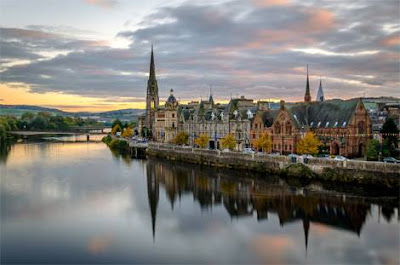 For my daring, I was fortunate enough to be answered by Dave GM0LVI on 18.086 MHz (the 17 Meter QRP Watering Hole). It wasn't the longest of QSOs, but it was a bit more than "599 TU". Dave got a 559 from me, and I received a 539 in return - there was lots of QSB. The neat thing about this QSO is that it was 2X QRP. Not only that, but it was also 2X KX3.  I was on my Buddisitck, and Dave was using his 2 Element Quad, which I'm sure is responsible for making this QSO happen.

I'll have to look into the history of Perth. It got me wondering if it's the namesake of  Perth Amboy, a city very near me here in NJ.  Back in very early Colonial times, the current city was actually two entities - the towns Perth and Amboy. I am wondering if that Perth was named after Dave's Perth? The two towns constantly feuded, until someone got the idea to combine the two smaller towns into a bigger city, renaming the themselves "Perth Amboy".