Tomorrow night is the Zombie Shuffle. Tomorrow night is our monthly Amateur Radio Club meeting. I have a conflict of interest, here. Since I am the recording secretary, the outlook for my participation in the Shuffle is bleak. Drat! If, I'm lucky, I can squeeze in an hour before I have to leave and perhaps another when I get home. Hopefully, by the time I get home (usually around 10:00 PM) there will still be some activity.

On the bright side, today was another productive QRP day at lunch. I worked PJ2/W4VAB, OM5XX and CU2AA. It was only after working Jacinto in the Azores that I looked down at the KX3 and realized that I had spent my entire lunchtime session at the 3 Watt level. Wow - 3 Watts into the Buddistick and I still managed to hop the Atlantic and get down into the Caribbean!

I heard and tried working UE25R on 20 Meters. He was CQing rapidly and was not leaving hardly any "blank space" at all for replies. It seemed he would finish sending his call, blink his eyes and start sending his call again. Obviously, with that approach, you must be looking for 599 stations only. I guess I didn't stand a chance with 3 Watts, even though he was L O U D!

The 4 States QRP Group came out with another new kit, which I immediately sent away for - a QRP antenna tuner.  I need one to use with the HW8, so I can hook it up to the W3EDP antenna. This will handle 10 Watts, and the HW8 tops out at about 4 Watts, so this will be perfect. Originally, the plan was to use my Emtech ZM2 Z-match tuner, but I like to leave that one in my portable ops backpack. 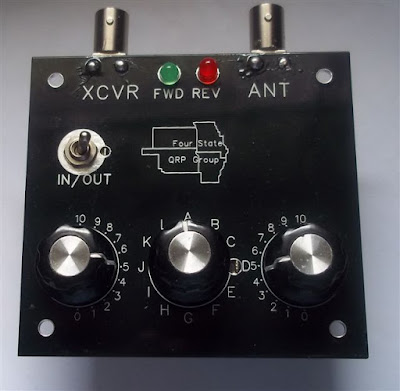 I'm also going to need a tuner for my Novice Station (redeux). When I was a Novice, I had a small MFJ tuner, but I think that this time, I am going to go totally homebrew. I wasn't  confident enough in my "from scratch" building skills as a Novice. I have a better idea of what I'm doing now.