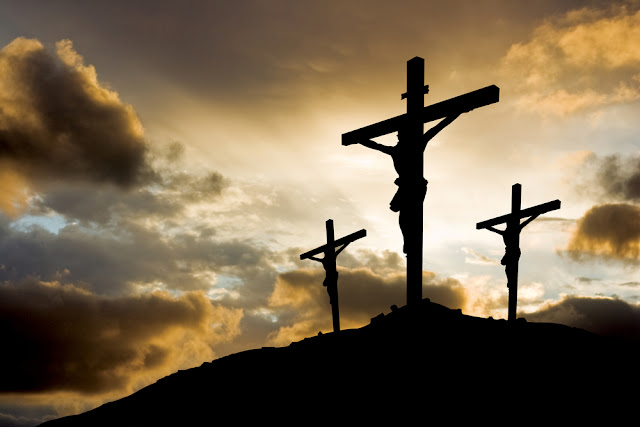 From noon onward, darkness came over the whole land until three in the afternoon.
And about three o’clock Jesus cried out in a loud voice, “Eli, Eli, lema sabachthani?" which means, “My God, my God, why have you forsaken me?”

Some of the bystanders who heard it said, “This one is calling for Elijah.”
Immediately one of them ran to get a sponge; he soaked it in wine, and putting it on a reed, gave it to him to drink. But the rest said, “Wait, let us see if Elijah comes to save him.”

But Jesus cried out again in a loud voice, and gave up his spirit.
And behold, the veil of the sanctuary was torn in two from top to bottom. The earth quaked, rocks were split, tombs were opened, and the bodies of many saints who had fallen asleep were raised.
And coming forth from their tombs after his resurrection, they entered the holy city and appeared to many.

The centurion and the men with him who were keeping watch over Jesus feared greatly when they saw the earthquake and all that was happening, and they said, “Truly, this was the Son of God!"

A Blessed Good Friday to all de Larry W2LJ
Posted by QRP - When you care to send the very least! at 12:11 PM