Midway and Kure Islands have been placed on the list of DXCC deleted entities, effective August 26, 2016. This came about as an unintended consequence of action last summer by then-President Barack Obama that expanded the Papahānaumokuākea Marine National Monument to include the northwestern Hawaiian Islands west of Ni’ihau Island, making it the largest contiguous protected conservation area under the US flag.

Midway (KH4) had qualified for DXCC status by virtue of its being governed by a separate administration. Because it is now under the administration of Papahānaumokuākea Marine National Monument, however, it becomes a deleted entity. Approximately 50 people live on Midway, including US Fish and Wildlife Service staffers and contractors. The Battle of Midway, a turning point in the Allied World War II Pacific Campaign, took place in June 1942.

Now uninhabited, Kure Island (KH7K), a part of Hawaii, is separated from the rest of the state by Midway; because of that, it qualified for DXCC status under Section II, 2 (b) (iii) of the DXCC Rules — separation from its “parent” Hawaii. Midway Island’s change in DXCC status in turn made Kure Island no longer eligible for DXCC status, since Kure no longer is separated from the rest of Hawaii by intervening land or islands that are part of another DXCC entity.

Kure Island once was home to a US Coast Guard LORAN station, remnants of which are still evident. It has been a state wildlife sanctuary since 1981. 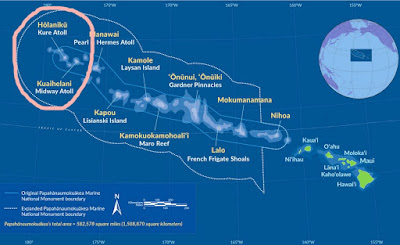 The relevant parts of Section II of the DXCC Rules follow:

A Geographic Separation Entity may result when a single Political Entity is physically separated into two or more parts. The part of such a Political Entity that contains the capital city is considered the Parent for tests under these criteria. One or more of the remaining parts resulting from the separation may then qualify for separate status as a DXCC Entity if they satisfy paragraph a) or b) of the Geographic Separation Criteria, as follows.

b) Island Areas (Separation by Water):

A new entity results in the case of an island under any of the following conditions:

Neither Midway nor Kure was able to be activated without prior permission and only for a planned DXpedition. Only contacts made on August 25, 2016, or earlier will count for these two entities.