Saturday was a normal, busy Saturday and it was cool with on and off rain. As such, that forced me to operate indoors for QRPTTF - and in a way that was a blessing. As it turned out, the bands were so dismal, that had I went out and traveled to a river and gone through the whole outdoor setup procedure, I would have been bitterly disappointed.  Somehow, making only four contacts isn't as disappointing when you don't have to brave the elements and the added work of setting up a portable station in the rain.

I could not believe the conditions on 20 Meters!  I heard stations, but only to the degree that I knew they that someone was there. Signals were so weak and into the ESP realm, that I was not able to copy any call signs.  I knew Morse Code was being sent; but that was about it.

40 Meters yielded my four QSOs.  I worked North Carolina, Ontario and Maine. There was one station (call sign withheld as I can't remember it! LOL!) that was frustratingly loud that I called and called and called ....... only to get "CQ TTF" as an answer for my effort. I finally gave up, figuring that he was either in a high ambient noise location, or that once again, propagation was not reciprocal.

The bad thing (or maybe it's a good thing?) about being a home station is that when the bands are dismal you can trot off and do other things, like chores and stuff. If I were a field station, I would have stuck it out longer because of the effort of putting a portable station on the air. I think the frustration level would have been markedly higher, though, as you look for a return on your expended effort. 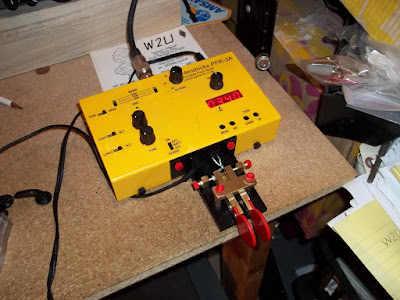 RIP, Jerry - you will be missed.

Lastly, I finally had the opportunity to sit down and play with something that was sent to me by Richard, G3CWI, owner of SOTABEAMS.  A few months ago, Rich graciously sent me a WSPRLITE, to play with and evaluate. The WSPRLITE is a small WSPR transmitter beacon, if you will, that you can use to test your antennas. 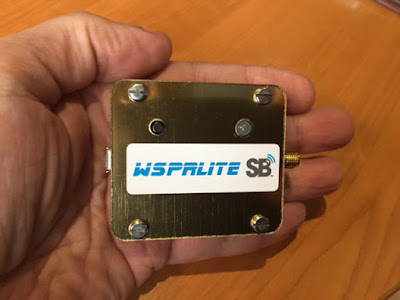 I hadn't the time, up until now, to give it the attention it deserves. Mind you, it's very easy to use - as easy as falling off a log - but as John Lennon wrote in a song, "Life is what happens while your busy making other plans."  I don't want to give the impression that I put off getting this little beauty on the air due to it being a difficult process. Nothing could be farther from the truth!  It's just that things (obligations, chores, colds) always seemed to get in the way each time I had planned to get it up and running.

Well, last night I got it up and running within a few minutes and got results almost immediately!  This lil' guy is way cool and I want to play with it for a few more evenings this week and then I want to let it run for a few hours in the daytime before I let you know what my impressions are.  But so far, it's a very neat tool to have, especially if you have more than one HF antenna and you want to see how they stack up against each other.

I hate to keep you hanging; but that's all I'm going to say about it for now.  The WSPRLITE will deserve it's own post to properly give it the evaluation it deserves - and you can look for that either next Saturday night or Sunday.