Another sunny day in NJ, so that meant another lunchtime QRP session.  I decided to stay put on 20 Meters for a change. I did a bit of CQing as well as a bit of hunting.  I stayed near the QRP area and heard many stations working a SOTAteer.  I heard the chasers, but not the activator.  I twiddled the dial and went up a bit to hear a very loud OM3KAP in the Slovak Republic calling CQ at around 14.063 MHz.

And I was heard!  But then, when the guy on the other end has antennas like this, how can you NOT be heard? 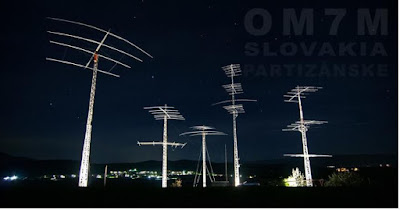 Miro was conducting a test between two yagi systems for the upcoming contest season. He wanted to know if I was able to detect a marked difference between the two.  I wasn't.  He was a solid 579-599 on both, depending on QSB.  Maybe a younger sprout with better ears could have detected a difference -  but I couldn't.  What I should have done was to ask him to conduct the test a second time, while I relied on the S Meter for an indication. But as they say, hindsight is 20/20 and my brain didn't think of that in real time. This is how he was being heard around the world: 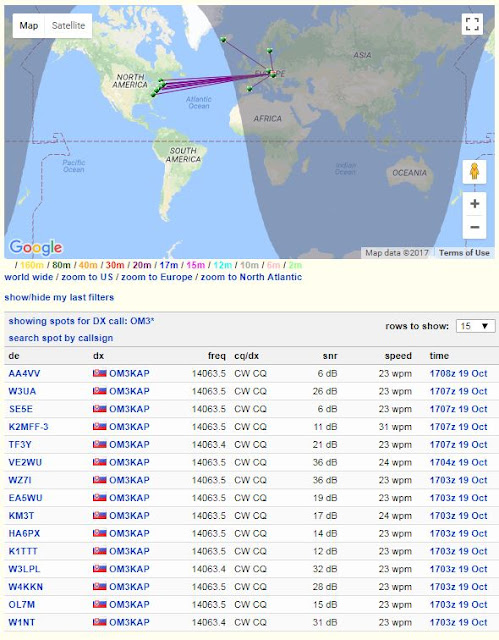 Pretty good, eh?  But then, with all that aluminum in the air, I'd be disappointed if I weren't getting RBN reports that looked like that.  I didn't tell Miro that I was running 5 Watts to a magloop.  After I gave him the report he was looking for, we signed.  It was more than your typical DX "5NN TU" QSO, but not quite a rag chew.  I was happy, though, to snag a bit more of DX. 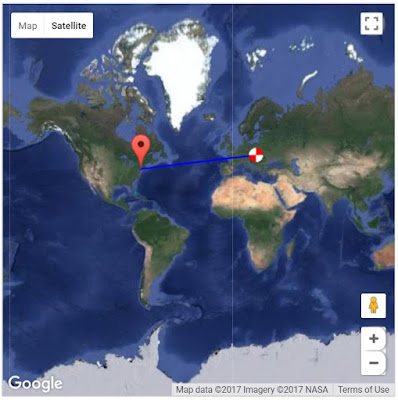 After OM3KAP, I went down to 14.0595 MHz, which was clear, and called CQ for a bit. I was answered by Mike KA5VZE in Tulsa, OK, who was also running 5 Watts.  Mike gave me a 539 and I gave him a 569; but then things went downhill.  Fading kicked in like nobody's business and we both dropped out on each other.  Oh, what could have been!  A potentially nice lunchtime rag chew kicked mercilessly in the behind by Old Man QSB. We heard each well enough for that final 73 and call sign exchange and the final, final "dit dit". 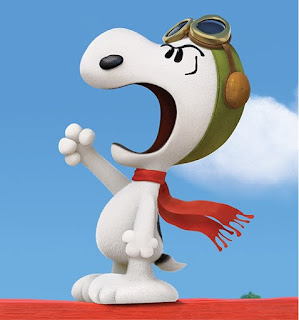