Today may well be the "Last Rose of Summer" until Indian Summer arrives, if indeed we get one this year.  It was partly cloudy and warm - near 80F (26C). Over the next few days, the temperatures are supposed to drop and bring weather that is more normal for Autumn.

I was hoping to work W3BBO for a lunch time rag chew.  I thought 40 Meters would do us in good stead; but looking at my RBN spots. Bob, who lives in Erie, PA, may have well been in the skip zone. 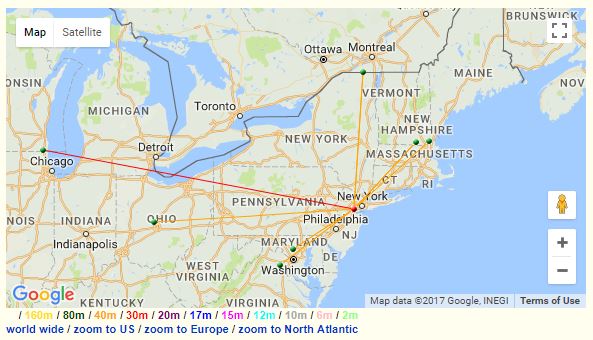 I called him a few times without an answer and then called CQ a few times, hoping he would look me up on RBN and try to answer me.  An after action e-mail confirmed that's exactly what he did, but he didn't hear me and if he tried calling me, I didn't hear him. Humbug.

I went up to 30 Meters after a while and didn't hear much there. 20 Meters was way busier, and in the time I had left, I managed to get both DR5E and ON4UN in the log.  Quickie DX QSOs rather than the rag chew I was looking for; but it's better than being skunked.

From the admittedly small sample of times I have used the magloop. compared to the multiple times I have used either the Buddistick or Hamsticks on the Jeep - they seem to be about equal performers in a very preliminary estimation.  It's hard to know for sure, though. I used the Buddistick and Hamsticks when the sunspot cycle was much more favorable. Having success with the magloop now makes me wonder how much better it might have performed when solar conditions were more robust.

On a side note, I got the chance to give Amateur Radio a little PR.  A woman came up to me and asked me what I was doing.  She and her lunch buddies at the next picnic table over were curious. I told her it was Amateur Radio and she looked at me like I had three heads - obviously she had never heard of it before. I asked her to Google (when she got back to her desk) Amateur Radio, hurricane, and Puerto Rico.  There are plenty of positive articles and videos out there that shed good light on our hobby/service.