JOTA was kind of a bust.

This past Saturday, an intrepid few from the South Plainfield Amateur Radio Club, and a few friends, set up in Putnam Park in town. Our goal was to get local Scouts from town to come and work other Scouts as part of Jamboree On The Air 2019.

As it turned out, no Scouts showed up.  I guess, once again, our second attempt at this fell short. We (actually Drew W2OU) DID speak to some Scouts up at the Watchung Reservation via the W2LI 2 Meter repeater. So in that regard we were successful, but we were really hoping to provide some Scout to Scout QSOs.  That's where the magic happens. 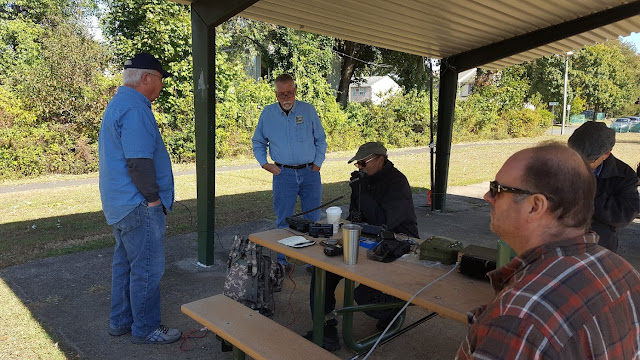 Bill W2AOF brought the VHF/UHF gear and I brought my KX3 and the PAR END FEDZ. Bob WB2UDC brought his K1 and that Elecraft AX1 antenna. 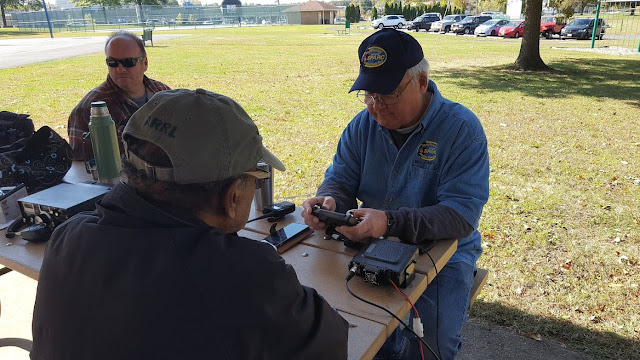 Bill W2AOF programming the W2LI and other JOTA frequencies into his VHF/UHF rig. 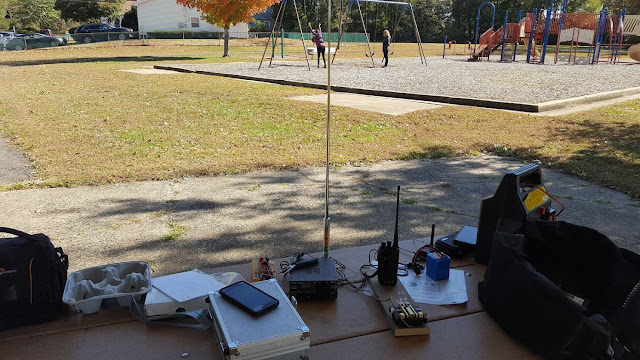 I have to admit when this antenna was first introduced by Elecraft that I was very skeptical as to how it could perform. And I remained skeptical when Bob brought it and placed it on his K1.  But then I worked ON6VL with the KX3 and the PAR, which was hoisted up into a tree. 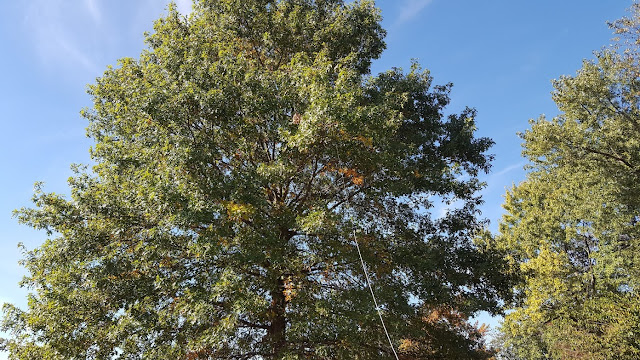 The PAR END FEZ in a nearby tree - you can see the coax going to the matchbox pretty clearly.

About five minutes later, Bob also worked him with that "thing" sticking off the back of his rig! I guess I'm too stubborn to see how that little bitty antenna is effective as an everyday QRP antenna. It goes against all those times the mantra of "Get up as much wire as high as you can" was driven into my skull. But I have to admit - it did work!  Bob even contacted a German station with it a bit later. So, OK ....... I'm still not buying one. The PAR and the KX3 got me a few more German as well as a few NY QSO Party contacts, so I was happy that everything worked the way it was supposed to.

Dave KD2FSI brought his HF/VHF/UHF rig along with his high power PAR and a VHF/UHF J-pole antenna, so we had that at our disposal, also. 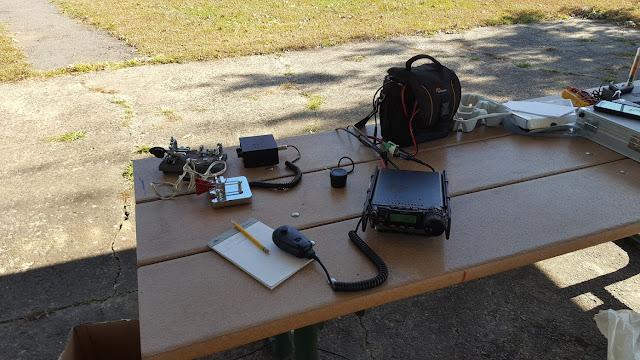 We also had Marty WB2BEW show up with an old Swan rig. It was a friend's and he wanted to see if it still worked. He hooked it up to my PAR (I told him he had to limit power so as not to burn up the PAR's matchbox) and he was still able to make contacts - so he was pleased as punch! 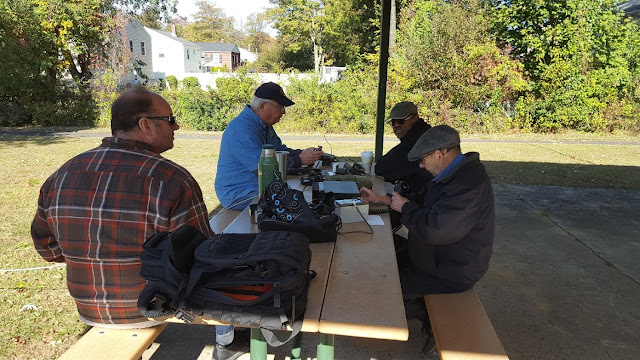 That's Marty WB2BEW to the front, right making QSOs with the Swan.

With regard to meeting up with and hanging out with friends, making a few QSOs, having some pizza for lunch and generally having a good time - the day was a HUGE success. With regard to reaching our JOTA goal of getting South Plainfield Scouts on the air and exposing them to Amateur Radio - not so much. The fact that it was a pretty chilly and at times, breezy day didn't help matters much. My hands were cold all day. I can't possibly see how Bill W2AOF and Dave KD2FSI were comfortable in just shirt sleeves. They both must have hot coffee running through their veins!

We've had great success at Camporees and at the recent JerseyJam, and I very much want to continue presenting at those kind of large scale events.  But I am tempted to bring up at our next club meeting that unless WE are invited by the local troops to give an Amateur Radio demonstration, that I think we're pretty much spinning our wheels inviting them and hoping against hope that someone will show up.