Our (the South Plainfield Amateur Radio Club) day at the Mount Allamuchy Scout Reserve for Jersey Jam 2019 was very successful. A good day was had by SPARC members, the Scouts, and their leaders. I hope we can do this again next year, should there be a Jersey Jam 2020.

The day started on the brisk side. Marv K2VHW, Chris N0CC, Wayne N2LRE and I caravanned  the hour ride up to the reservation, after loading up essential gear from our SPARC meeting place. When we left South Plainfield, it was probably around 44F (6C). When we arrived at our destination, it was 37F (3C), and you could tell there had been frost on the ground overnight.

Dave KD2FSI, who lives only 17 miles away, had already been there and had set up most of his equipment. He had an HF/VHF/UHF station going with his big batteries in attendance, running 100 Watts. In addition, he set up his portable man pack station, as well as his satellite station and his Alex loop for demonstration purposes. It was an impressive sight to say the least; and I saw no point in setting up a QRP station. We would have been in such close proximity that I probably would have been blanked out on receive and the day was for demonstrating Amateur Radio, not operating QRP, 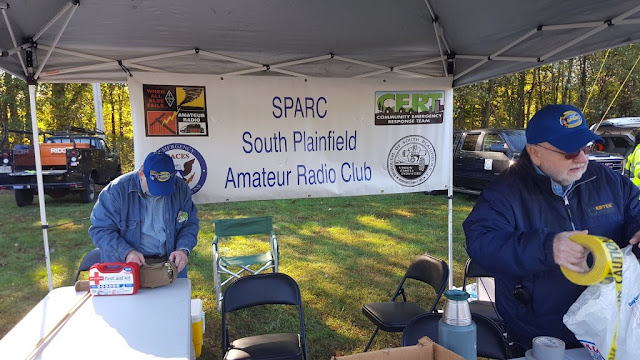 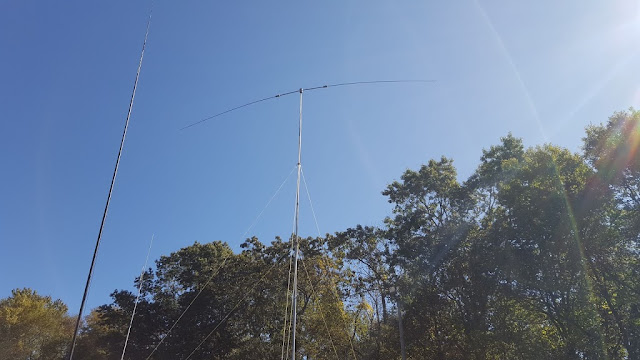 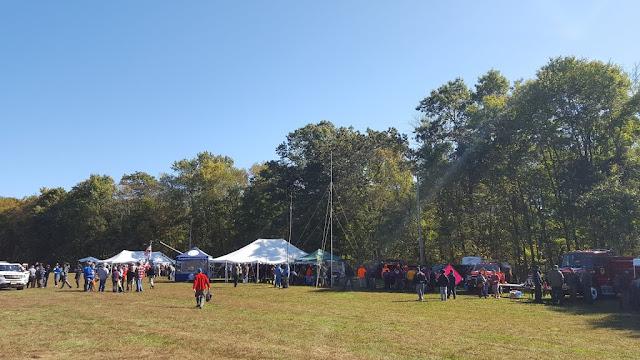 The Scout Reservation has its own Ham Shack and WW2BSA was on the air, making contacts at the other end of the venue. This was a great opportunity, as we were able to put Scouts on the air, allowing them to talk to WW2BSA from the field using VHf/UHF handhelds.  Scouts visiting the Ham shack got a chance to talk to Scouts at out field and visa-versa. There was a shuttle bus that ran back and forth between sites, so we encouraged the Scouts at our set up to go and visit WW2BSA. 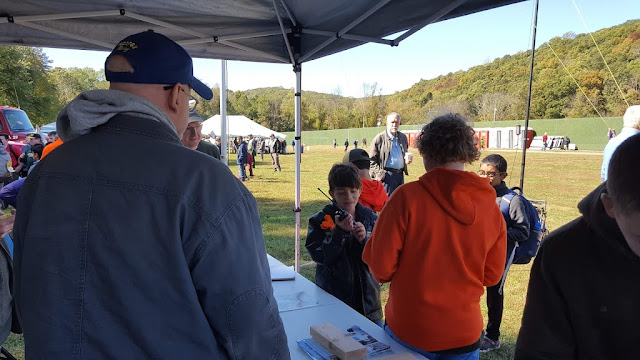 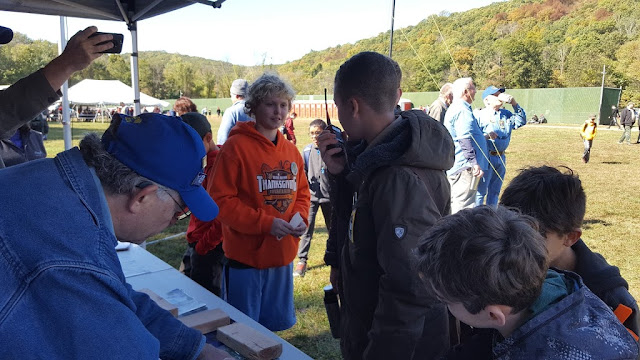 Dave KD2FSI's main HF antenna, a 20 Meter Buddipole type, was working its magic. We were able to demonstrate HF contesting to the Scouts as SPARC members took turns working a lot of station from the California QSO party, which ran yesterday. To demonstrate working DX, we were able to make contacts with Slovakia, Norway, and Hawaii to name a few. 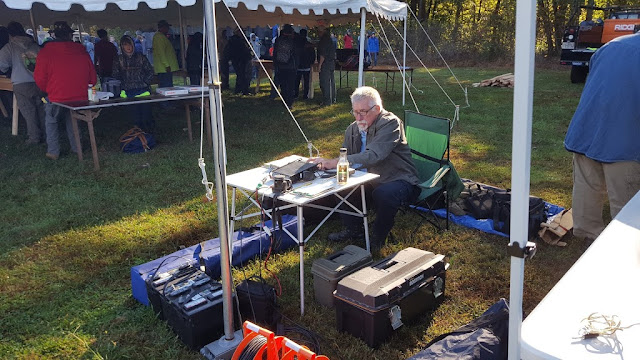 Even with the sunspot total down in the dumps, it's amazing who you can work with a good antenna and some patience and determination.

But once again, the hit of the day was the Morse Code demonstration area. Marv K2VHW brought along a code practice oscillator, a bug and a paddle, and I supplied one of my straight keys. The kids were fascinated by the set up. This area of our booth seemed to be almost constantly occupied, and Marv and I took turn explaining the history of Morse Code and how it evolved over time from land line telegraphy to CW in Amateur Radio. 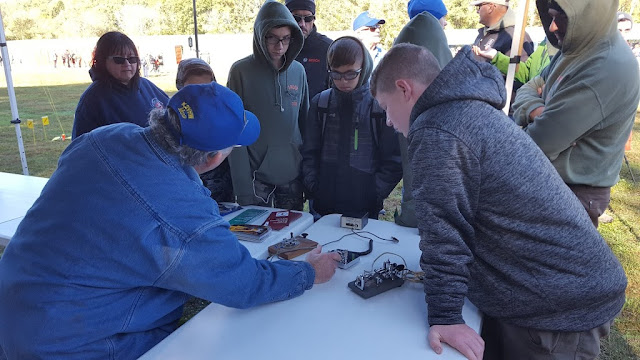 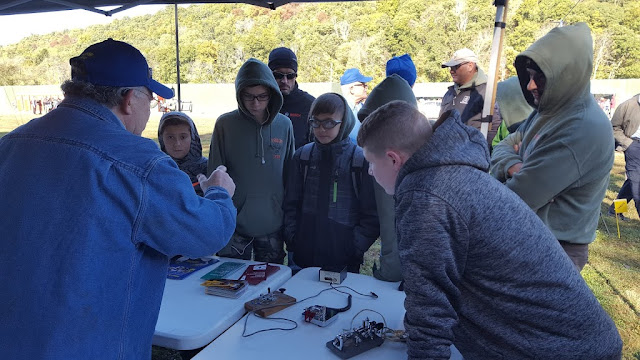 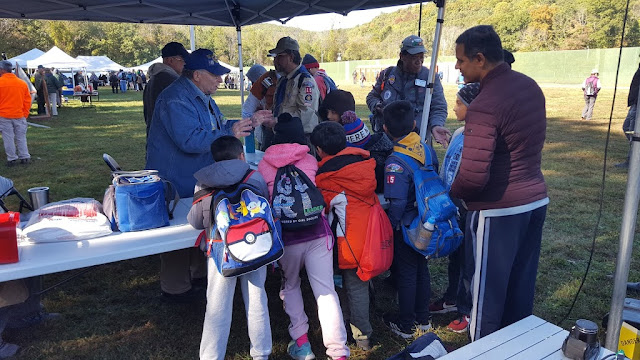 Another facet of the hobby which interested both the kids and the adults was Dave's satellite antenna. 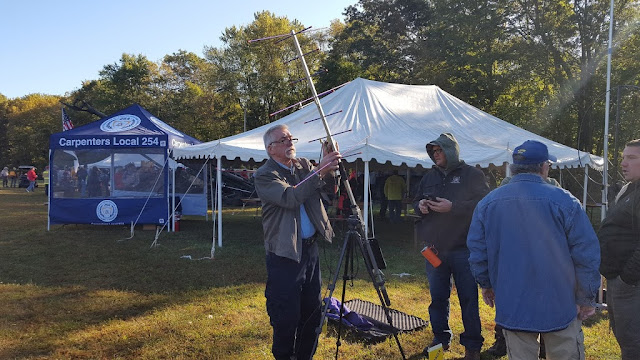 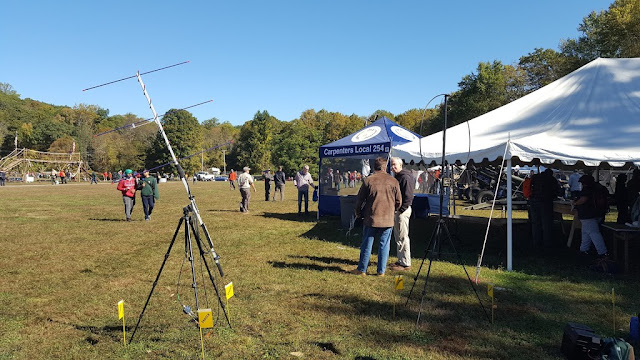 Although the station was set up more for looking at, rather than trying to work an actual satellite, both the kids and adults were fascinated when they found out that with a Technician  license they could communicate with not only the many Amateur Radio satellites orbiting the Earth, but the International Space Station as well.

All in all, it was a fantastic day, getting the chance to spread the news about Amateur Radio to people who probably had no idea of what was available to them. At 5:00 PM, we tore our display down and headed home, tired and hungry, but satisfied that we had accomplished our mission for the day. Thanks go out to the Scouts, Chris WW2BSA, Bill W2AOF, Marv K2VHW, Harry KC2PGX, Wayne N2LRE, Chris N0CC and of course to our "Main Man" Dave KD2FSI for another successful venture.