You can't eat just one - you can't make just one QSO.

As I stated before, I was not really hepped up for this Field Day. For me, Field Day is way more than just the operating event. The planning, the set up and tear down, the being with good friends who understand your passion end enjoy doing what you do. It's a social event - not just an operating event; and that's what makes it so special - and for 2020, COVID-19 blew all that right out of the water. So no, I was not very eager about Field Day 2020.

The plan was to set up the station out on the patio, operate from the table we have out there under the big market umbrella. I took care of all my chores early with the intent of setting up around 1:30. It doesn't take long when your equipment is designed with portable in mind. While I was mowing the lawn, my phone chirped with an advisory from NWS - severe thunderstorm watch until 8:00 PM local time. That torpedoed my outdoor plans, which in turn made set up even easier. I decided to take my portable KX3 down to the basement, hook it up to the deep cycle marine battery and operate there as W2LJ 1E NNJ. Set up would be even easier, 5 minutes max.

After I mowed the lawn (final chore of many), I set down on the couch. BIG MISTAKE!  Next thing I know, it's 2:30 PM and Field Day had begun without W2LJ. When I awoke, I took everything downstairs and WAS operational within 5-10 minutes. I worked until I had 20 stations in the log and came upstairs for a stretch break and something cold to drink. That's when I heard my AcuRite lightning detector chirping. I rushed downstairs, disconnected the antennas and shut everything down. And to be honest with you, I wasn't sure if I was even going to bother getting on again. It's just not the same as being in the field. To that point, about a three hour break ensued which included dinner and being with the family.

Around 8:00 PM, I decided I'd give it another go - maybe I could get to 50 stations worked before turning in,  Conditions on both 80 and 40 Meters were fantastic! 20 Meters was good as well, but for some reason, the SWR on 20 Meters was like a roller coaster, up and down, up and down. I had to hit the ATU button on the KX3 quite often - something I never had to do before. Not knowing what the problem was, I stayed on the W3EDP and when I looked at the clock, it was Midnight, I worked two more stations to bring my total to 100 QSOs and hit the sack for the night at 12:15 AM.

When I woke this morning, I was pleased with my total and was kind of ambivalent about getting on again. But like the post title says, once you're into it, for better or worse, Field Day is like Lays potato chips - "You can't eat just one."  I took a shower, made some coffee and headed down to the shack again, Before I knew it, I was at 150 QSOs when I decided to take another break. 15 Meters had been open and surprisingly, the HF9V played well and behaved itself, To me, that meant any problem was not at the feed point or with the feed line, It had to be something with the antenna itself. I knew that I would investigate some time after 2:00 PM.

I sat down on the couch again, took another short snooze and when I woke up, I headed down to the shack for one last time. "Maybe I can make it to 175 QSOs", I thought to myself. 175 became 185 and the 185 became 190 and finally reached 200 when I shut down with about 20 minutes to go, In that last session, I actually ran a frequency for a little while on 40 Meters and actually had a tiny pile up. Not bad for 5 watts, eh? Here's the statistical break down: 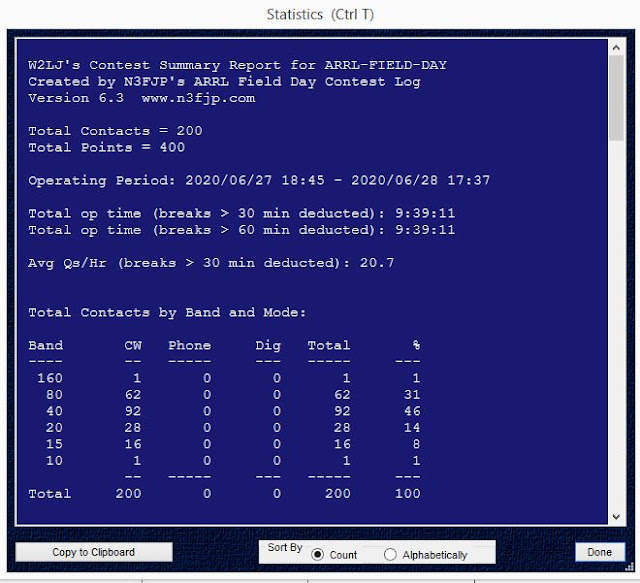 Not the best Field Day effort I've ever put forth, but considering the circumstances, not a terrible one, either. I'm pretty happy with it,

As a whole, propagation was weird. Severe QSB plagued both days, and for me at least, most of  my RF was blocked by an invisible RF shield located at the Mississippi River.  Colorado, North Texas and Saskatchewan were the only locations in the West that intercepted my RF. 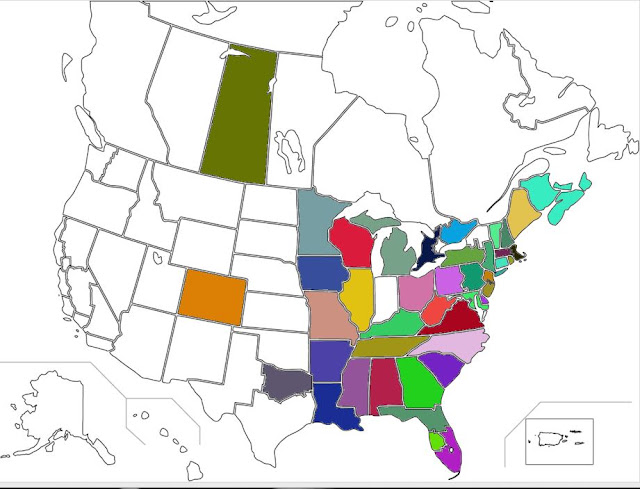 I worked all the US Eastern Sections except for North New York, Puerto Rico and the Virgin Islands ...... and Indiana! Hey, Indiana Fireflies - where were you guys? LOL!

To complete the day, I discovered and rectified my 20 Meter SWR problem, I hadn't noticed that ivy had grown into and wrapped itself in the HF9V's coils. I cut the vine at the base and removed the offending foliage. A quick run to the basement seems to indicate (for now) that the ivy was indeed the problem. Some "TEST DE W2LJ VVVVV" transmissions on 20 Meters and the SWR remained rock solid at 1.2:1. I hope that's all this was - I don't need bigger antenna problems.

Thanks to all who worked me and put me in their logs!