I got the new W3EDP up today with a little modification from my original plan. I intended to move the center mast a little farther back in the yard, but that turned out to be a no-go. There's a small amount of  poison ivy back there along the chain link fence that I didn't want to deal with today, so I kept the mast where it is. The red line shows where I had intended to relocate the mast to. 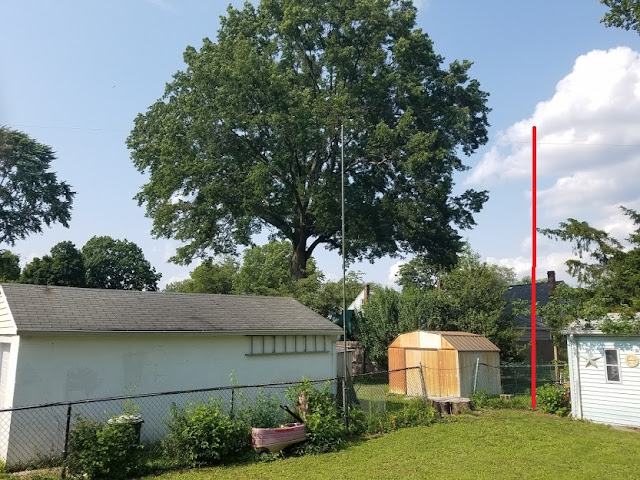 The added 18 feet of wire brought the end of the antenna closer to the mast on the opposite side of the backyard, but still not to the very end. There's no wire hanging down vertically like there used to be when I had a G5RV. An on the air test proved the KX3 was able to provide a good match with ease on all bands 160 through 10 Meters. The old W3EDP proved a capable aerial for years, I expect the same from this one.
The big surprise of the day came when I was taking the old W3EDP down. I unwrapped all the electrical tape that I had covering where the PL-259 was attached to the balun. When I tried to loosen the PL-259 from the balun, it was already loose! It wasn't anywhere close to being disconnected, but I was able to turn the connector's tightening shell freely with just my fingers. If I was tightening instead of removing, it would have been another turn and a quarter until I had reached finger tightness.
When I attached the coax to the new balun, I not only snugged it finger tight, I also used a pair of channel lock pliers to get it just a tad tighter than finger tight. Not so tight as to damage the balun, but it should remain nice and tight for a long time. Then I securely wrapped everything with electrical tape to keep the connection and the coax free from potential water damage. I should be good for the next 10 years or so, if not even longer.
Later in the afternoon, I headed out the backyard to retrieve the old antenna and I saw we had a visitor. 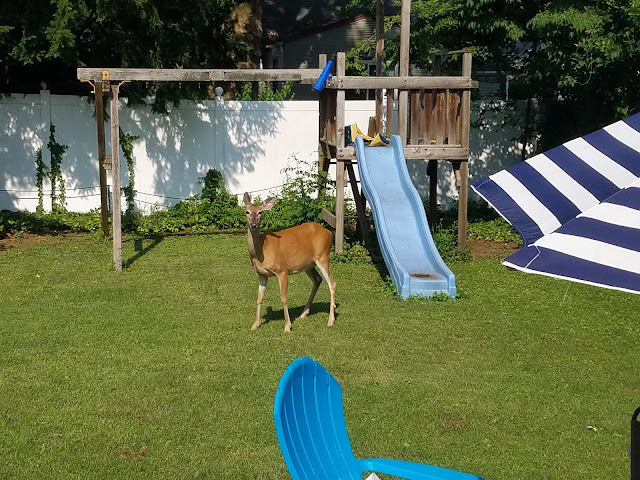 She didn't even flinch as I opened the back door, but she did keep a wary eye peeled on me. I called my son Joseph over to see and she didn't flinch when he came out to join me on the deck. When Harold, our Beagle approached her to say "Hello", she took off like a flash. She jumped the chain link fence into our neighbor's yard right over that break where there's no cross rail. I was afraid she'd snag a hoof on my coax, but she sailed right over without coming even close.
72 de Larry W2LJ
QRP - When you care to send the very least!
Posted by QRP - When you care to send the very least! at 5:18 PM