Bill; W2AOF, Ron N2LCZ and myself got together last night to put together the Field Day score submission for the South Plainfield Amateur Radio Club. This was a chore always handled by Drew W2OU, who is now an SK, so we are rookies. The process was quite easy, easier then we expected. Bill is going to have to resubmit, though, I think. Unless he got a confirmation from the ARRL, we're not showing up on their webpage as a submitted score.

Tropical storm Elsa has visited our environs. As I type this, she seems to be moving away from the NJ coast. We only received about 3/4" of rain. We've gotten more than that during a summer thunderstorm, so for our area, not too bad. The winds were not too bad, either - at least in my neighborhood. As I drove closer to work in Hunterdon County, NJ, I did see some tree branches down here and there.

There seems to be a debate going on on one of the Amateur Radio pages on Facebook as to what the power levels are that define QRP. There's wide swath  of opinion, to anything from "whatever low power setting you're at" (whatever that means!) to 5W or less ONLY.

I offered my $0.02 and went by the definition put forth by QRP-ARCI, and that is 5W or less for CW and the Digital Modes, and 10W or less for SSB. To be honest with you, I didn't think this was such a controversial topic. One Aussie Ham told me that my opinion was irrelevant and didn't count as I am not licensed - my name didn't show up  in the Australian Callbook, I guess.

I guess you'll always have uber purists who think that 5W is the limit no matter the mode. It also doesn't help that there is no standard from contest to contest, or operating event to operating event. Sometimes it seems that QRP means whatever is in the mind of any given event organizer. For the NJQRP Skeeter Hunt, we use the QRP-ARCI definition.

I can understand the uncertainty about it all, though. When I joined QRP-ARCI way back in 1980, QRP was  considered to be 100 Watts or below. My original membership certificate shows that.. QRP has come a long way since then! 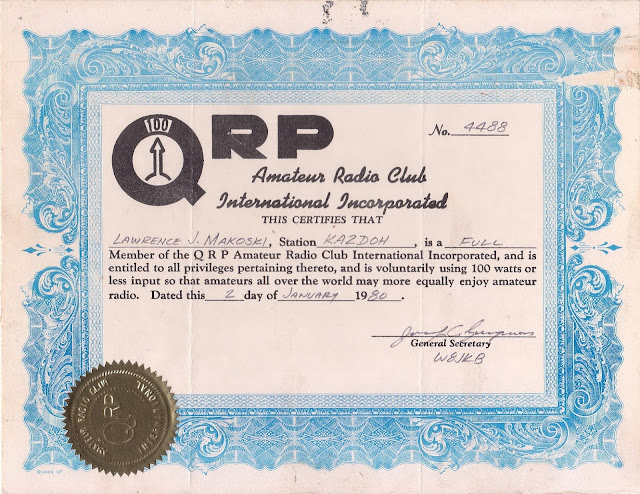