It's time for some new QSL cards. I've been playing around with some ideas in my head for a while now. Do I want the card to reflect New Jersey somehow? Do I want it to have a picture of the K2 or K1 or something like that? Or do I want to relate the card to one of my other hobbies, perhaps my interest in the Revolutionary War? Since New Jersey is considered "The Crossroads of the Revolution", I thought that might be a good theme.

As an aside, did you know that more military activity took place in New Jersey than any other colony? Yes, there were more battles, skirmishes and fights in what we now call the Garden State, than any other colony. In fact, not more than a couple of miles from my house, in Edison, is the State of New Jersey recognized "Oak Tree Pond" park. It was here that local farmers and New Jersey militia fought back British troops who were trying to engage in a flanking maneuver during the Battle of Short Hills.

A little farther away to the north, in Scotch Plains, is the Frazee House. The occupants of this house also played a role during the Battle of Short hills when General Lord Cornwallis attempted to commandeer provisions from the Frazee's for his British Regulars. 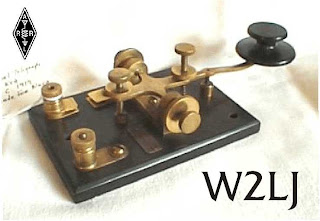 In the end, I decided to stick with a simple and clean Amateur Radio theme. Above you will see a rough idea of what the finished card will look like. If your a frequent visitor to this blog and/or my Website, the image will be familiar. It is the photograph of the Federal Telegraph key that I prominently display on both sites. I figured, that why shouldn't my QSL card have it as well?

A good friend, Brian KB9BVN had his QSL cards printed by Gennady UX5UO. They came out beautifully, so I have decided to give Gennady a shot. I checked him out on e-Ham, also and he received a 5.0 rating with over 350 reviews. I figure that if he can make that many Hams happy, then he must be doing something right! So I went to the UX5UO Website and submitted my design this afternoon. I think the price for the "Economy" (non-glossy finish) cards is $69.00 for 1,000 cards, postage included. I'll keep you all informed as to how this all comes about.